This blog was more of a focussed journal when I started the first version back in 2003. At the time my two main missions with the blog were to record my progress as I revamped my site, and for it to be a notebook of my adventures with learning how to create 3D graphics with the Blender 3D software.

Very early on, I did a recap of my experiences with creating 3D graphics up to that point, and then when on to journal my progress over the next few months. I did make a lot of progress, but unfortunately my blog ground to a halt with a casual report on some of my latest 3D images back in August 2004.

It was almost three years before my blog was revived, this time with a whole new design and its own domain here at SamirBharadwaj.com. I never stopped working with 3D graphics, but I never returned to that frenzied learning of the early days, and I rarely spoke about it on my blog, which has become more of a repository of my thoughts than of what I do. I’ve been thinking of re-learning Blender, since a drastically re-engineered new version (2.50) is almost ready. But before I start talking about 3D graphics here again, why not an updated recap of my adventures in 3D graphics? I might have been silent about Blender 3D and computer renderings over the last 5 years, but I was not idle. 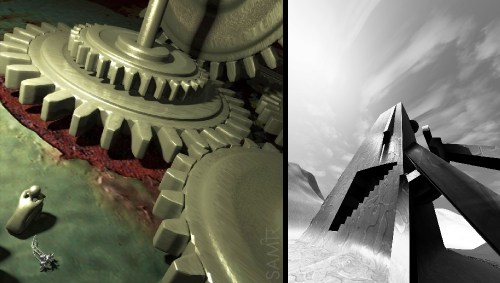 My last post on my 3D work was about images for the Weekend Challenge held on the Elysiun forums. Elysiun is now BlenderArtists.org and it is still a vibrant community. Back in those days, I continued to participate in the weekend challenge when inspiration stuck, and interesting images did result. Above are some. 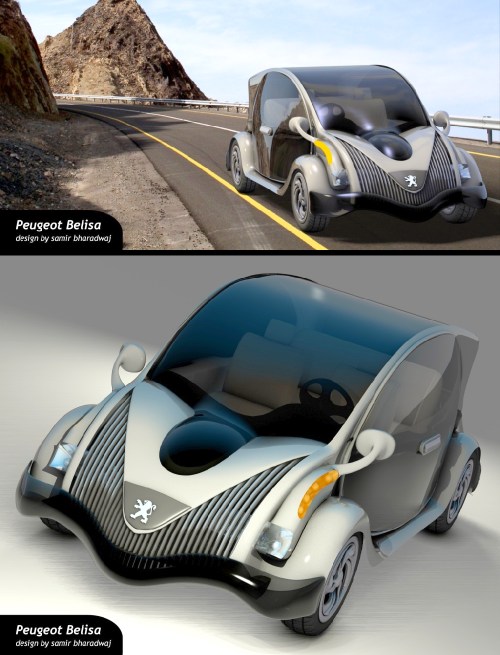 One contest that did catch my attention was the car design competition organised by Peugeot. They hold a contest every two years for artists and designers to submit car designs based on a theme. I thought it was a great excuse to push my images to a more finished level, and the Belisa is what I turned out. Working on it taught me a lot, and I’m still proud of making this from scratch without any deep-seated obsession with cars. 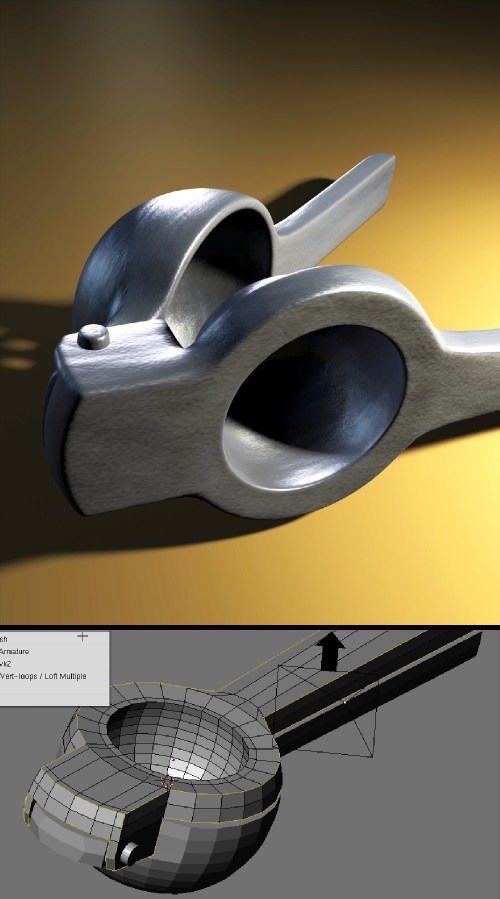 Along the way another interesting opportunity presented itself. I got a chance to write an introductory Blender 3D tutorial for CHIP India magazine. I was a fan of the magazine for years before that and it is one of the most widely distributed in India. I had a 4 page tutorial published in the magazine about how to create the image above. A great feeling to see your work and instructions in print. 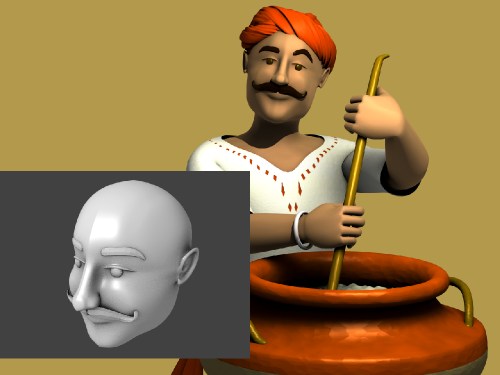 By this time, I was confident enough about 3D rendering to start using it in my other design work. And in some cases, I began to receive projects based only on my 3D skills. The character above was modelled on the figure in the Puranmal Restaurant logo. This was to serve as a modern take, and this image still adorns the front of all their menus in their many restaurants throughout Dubai. 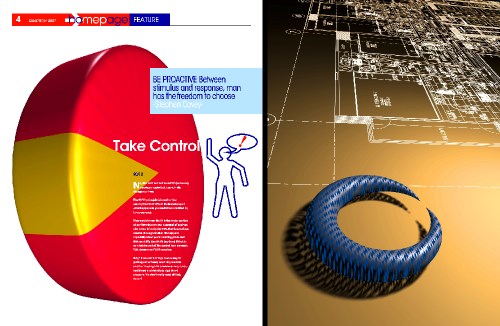 When I was working on a corporate magazine/newsletter for a few years, simple 3D images like the pie-chart above (left) would often help add some pizazz to an otherwise plain page. It got me out of many tough spots. At other times, like in the front image for an Eid greeting card (above right), 3D helped bring together unmatched elements like the moon and engineering plans, and give them that magical feel.

While I’m almost a purist when it comes to logo design, I also started experimenting with using 3D imagery in logos and identities. In an increasingly online world, there are opportunities to design logos that will rarely need to suffer the rigours of print production or work on a fax transmission. At some such junctures I did add in a 3D touch into some logo design options I presented to clients. 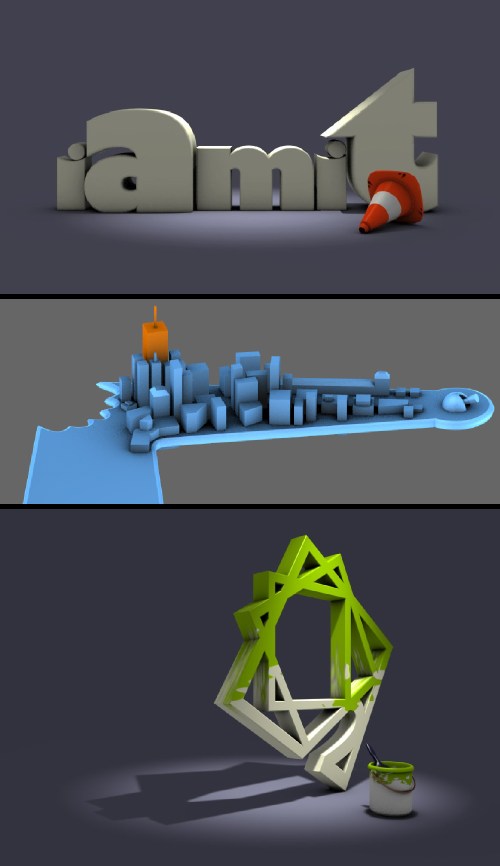 Web site graphics were another place I included 3D graphics, when it was appropriate. When done well, rendered graphics immediately lend a professional look to the site. The top and bottom images above were meant as “Under Construction” screens for websites. The top one was just for a personal site, but the 3D makes it look much more serious. The middle image was created as an element for a web template. There is plenty you can do with computer imagery if you go beyond the obvious. 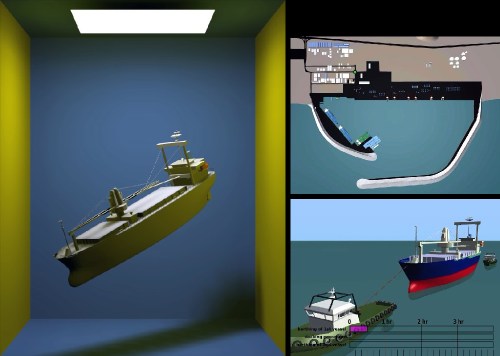 Being asked to do my first animation project was a fairly big step in my using 3D for serious work. I was called in to create a 3D visualization for a shipping company who wanted to simulate ship movements and port procedures to show clients. The challenge was that it needed to be a real port with the ships at real scales, so that it made for a realistic simulation of how things fit in the space. Also, I had less than a month to complete it, obviously. My computer(s) were rendering thousands of animation frames for weeks, and both me and the client were quite pleased with the result.

Once in a while, I did continue to just play with 3D graphics. For a while I was doing weekly themed exercises with some friends, to help us learn animation. Strange things like the Carrs animation above resulted. Just snippets of a few seconds which helped keep my 3D muscles healthy. 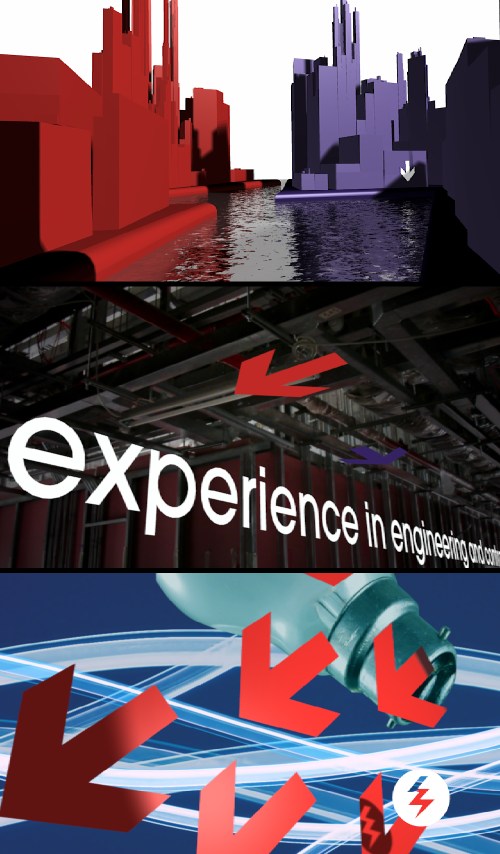 A couple of years ago I was once again handed a big animation challenge. A regular client was participating in an important exhibition and they wanted one of those fancy corporate videos to show off at their stall on an obscene flat screen TV. The only problem was, they had no video, and the only material they had was still photos of their various construction projects. Making a slick video from fairly boring stills was fun. I used Blender to do the whole thing, moving and manipulating images and graphics in 3D space, instead of using a video editor. Quite an interesting way to work, and the end result looked very impressive on a wide screen TV, while also covering all the technical information required. 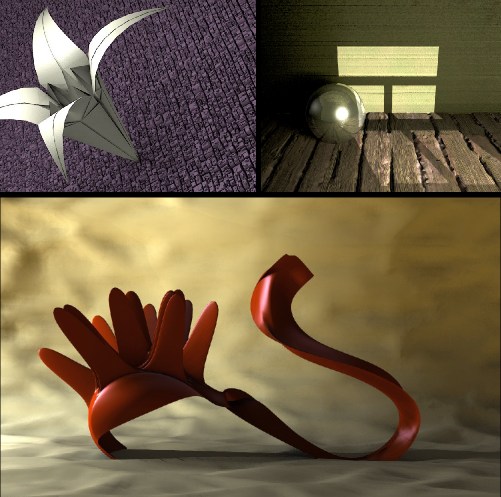 On and off I have continued to open up Blender and tinker with effects just for the sake of trying something out. All the images above were a result of such playing. They all started as trials for lighting ideas, or texture ideas, or in the case of the origami flower, just wanting to see how easy or difficult it was to recreate an origami design in 3D models. 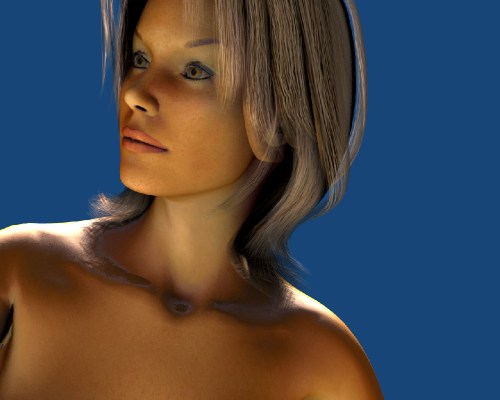 From the beginning of my 3D journey, creating human models has always been a dream. While I’ve never put the requisite time into it, I did play around with getting the right skin look at one point, using the readily available Victoria female model from the Poser and DAZ Studio software camp. This image was done with fairly simple material work, before Blender was capable of faking SSS and doing complex node materials. Now I’m sure much more convincing skin effects are possible, but for the time, I was quite happy with my progress.

That is a summary of my 3D experiments over the last half decade of silence on the topic. Now, Blender is about to have a completely redesigned version out with the completion of the Durian Open Movie project. I look forward to re-learning it and getting back to more regular experiments in 3D. Maybe I’ll even tackle that human model I’ve always wanted to try my hand at. Whatever I do, I’ll be sure to write about it on this blog as it takes shape.