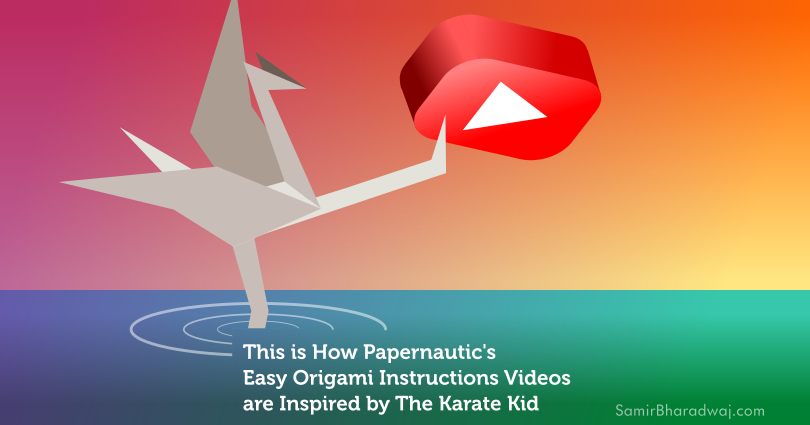 When it comes to paper craft and me, the answer to every “why” question is usually because it’s fun, and because I can. However, there are more compelling reasons why I’ve started creating origami instructions videos over on the Papernautic channel on YouTube. I’d like to share those reasons, what they have to do with The Karate Kid, and also give you a peek at the initial set of paper folding tutorial videos.

Folding tricks with no name

Like most skills, paper folding has basic techniques you need to understand to make the most of it. Also typically, some techniques have names and clear definitions, like a mountain fold or a valley fold, but there are a many subtle skills that have no clear steps or definable labels. In the case of origami, that includes just having a feel of how paper folds, what folds follow naturally from what other folds, and what basic folds stacked on top of each other lead to what common shapes and forms.

All these less formal lessons of paper and how it folds cannot be easily given to someone through a specific series of instructions. A lot of it is to do with having plenty of folding practice across a variety of models, and starting to get a feel for the unspoken language of paper folding. This may sound vague and hokey, but it’s not, let me explain.

If you’ve ever watched the classic 80’s film The Karate Kid, you’ll be familiar with the phrase “Wax on. Wax off.” For those not familiar, our young hero goes to an old oriental man to learn the martial arts and for several days the man puts him on the seemingly unrelated task of waxing his car. The sensei shows him the two movements, rotating his arms in clockwise and anti-clockwise direction, wax on and wax off. Of course the old man is actually training the boy in some of the basic arm movements of the discipline, and is building strength in his hands to execute them. Sometimes the best way to understand something is to just dig into the movement and learn it intuitively rather than dissecting theories and formal techniques. The less violent martial art of origami is similar.

There is great value in understanding the basic folds and making the fundamental base forms (bird base, frog base etc) to learn the craft from the ground up. I will make videos on all those aspects of origami in time too, but most people would never have the patience to pick things up in this formal and academic way. It’s likely you just want to make something fun immediately. You want to throw that metaphoric punch rather than going through long training exercises.

In origami, making simple, easy-to-fold models of various styles and sizes is the “Wax on. Wax off” exercise. You seem to be doing something routine, when you’re actually picking up the fundamentals by practice rather than explanation. You’re absorbing common techniques and folds while making simple and fun models, rather than intellectualising the technique too much. I think that’s a great way to start with any skill.

Many know I have some interest and skill at folding paper. As the popularity of origami videos have grown online, I’ve often been asked to help with some particularly coveted, but complex models, from the talented hands of Joe Nakashima, Tadashi Mori or similar origami video stars. I’ve tried to follow their videos and I can understand why the average person can get lost. I lot of it just cannot be adequately demonstrated in a video without being able to touch and fold the paper as the original model you’re trying to emulate is being made. I get lost during these videos too. It’s just a complex process. The way around this is not in having any special technical knowledge but in having more of an intuition of how paper folding usually works, and this sort of feeling has got me through many a tough folding spot.

To grow your own intuition in that way, you’ll have to learn origami the way children learn it and the way I did: pure experimentation and practice. The best way to do that is to fold many simple models and along the way, you’ll pick up a sense of paper folding and its common tricks. No amount of book-reading and explanation can grant you that.

The idea behind the Easy Origami series of videos on Papernautic is to allow you to have some fun with easy-to-finish models as you learn the more technical aspects of the craft by osmosis, rather than my strict instruction. Once you have these basics at your finger tips, more complex models will be less daunting, and you will be more likely to know what to do next. You will also learn to sometimes improvise when origami models with hundreds of complex sequential folds don’t go quite as you’re seeing in videos and instruction diagrams.

I have a more selfish and personal reason to make videos about my favourite basic models too. Origami has been an important part of my childhood and my life since, so when I share my stories, I inevitably write about my paper folding memories. Whether it is my memories of making paper boats in the monsoons at my Grandmother’s place, or my stories of my obsession with real planes and paper airplanes when I was growing up, origami often pops up when I write. It sometimes becomes a challenge to link to material showing the curious reader what particular model I’m talking about in exactly the way I’d like.

Not only does everyone who folds paper have their own, sometimes quirky, methods of folding popular models, they also have different ways of thinking about the process. I’d like to have instructions for these models the way I think of them. Instead of hunting around the internet through millions of videos, this lets me teach you how I make things, and sometimes, it even ties into my story of why I make things a particular way. I feel that is an important record I’d like to keep and share.

It’s been a massive learning process, putting together this initial set of videos. So many technical things to learn about video editing and audio recording to get things right. In fact, you can see the audio quality improve drastically, and sometimes get a little worse while I experiment with editing techniques. The best improvement I managed to make during the process was to get myself a good solid USB mic, which I highly recommend. It’s a Blue iCE Snowball, and it’s great for recording on the computer with the minimum fuss.

Even with all that technological help, I have to confess my sexy origami voice sounds exactly like my voice sounds most of the time. That too will get better with more practice, I’m hoping. For now, I hope you go over to the Papernautic channel and subscribe (click that bell icon so you get new notifications when a new video goes up). The numbers help the videos to be seen by a larger audience. The plan is to publish a new video every week for the immediate future. There are plenty of ideas to explore, and as always, you wonderful people will be the first ones to know when I come up with another mad scheme to add to my quiver. I’ll leave you with the entire play-list of easy origami videos which will be automatically updated as new things appear. What are your favourites? Let me know in the comments below, and enjoy the folding! 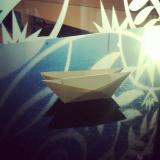 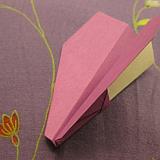