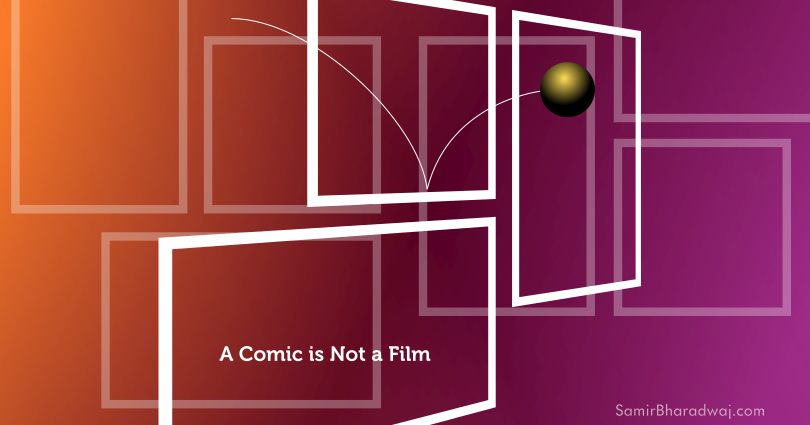 I‘ve been savouring some comics recently. You can insist on calling them graphic novels if you’re too scared to say ‘comic’, it makes no difference to the experience of reading one. The comic is a wonderfully rich medium. Some of what I am reading is decidedly mediocre, and some of it holds that meaty satisfaction that you find in well-crafted fiction of longer lengths, the kind that never attempts startling remarkableness, but is made more satisfying for being bathed in solid craft without the gold leaf.

I’ve come to appreciate that to understand the marvel that is the comic and what makes the best ones work, you must take into consideration two aspects of its existence: How the comic is placed in the history of storytelling, and how it is truly experienced by the reader in the most minute of details of perception and process.

Good comics are not novels

In the realms of reading, storytelling before the comic was the written word. Short stories led to longer ones, longer ones led to serialised writing, and serials led to novels. The thing about all these forms of story is that they are basically a very strict sequence of what is happening in the narrative line. Written stories, however complex they can get, are ultimately a series of micro reports of events, people and things happening. Some of the oldest comics, tried to do exactly that, because it came naturally.

You can still see this today. Serialised comic strips in newspapers, the few that survive, still work in this very linear flow, reportage form of storytelling. Read some of the older comics that tried to tell longer stories, and these limitations of scope become very clear. The comic takes on a metronome-like rhythm of unending monotony. The plot might be exciting but you, the reader, only ever live in a single panel. It’s stifling and not very melodic.

Good comics are not movies

Storytelling after the birth of the comic was, and is, in the form of cinema and moving images. Most recent comics are trying to be films. They are not trying to be a linear series of reports like the old ones. Movies are a sequence of experienced scenes, heavily visual, and hence very visually indulgent. Movies are made wonderful by their ability to actually have a fixed flow of time, and hence they can play around with the speed of time and our perception of it.

Sometimes, the cinematic camera lingers on minute details and insignificances, and time slows down. Sometimes, the filmic eye sweep into and through the action and events with a healthy editing of the normal flow of events and then time rushes by, compressed into an unrealistic pellet of happenings that expand fully formed into the viewer’s mind. Films are a visual medium that linger on the experiencing of the visual world, and recent comics have shared that indulgence without any of the actual movement that makes films tick.

Somewhere in this truncated number-line of storytelling, between the sequence of reported events of the written word and the flow of experienced scenes of the motion picture, comics are a medium of their very own which work in their own unique way. This way can have very little to do with what came before and what followed, and that is when comics are at their best.

Comic books are not movies. They are not a way to indulge in a series of scenes or a sequence of cleverly composed images for the pleasure of indulging in the visually captivating world, a cinematic treat. The worst current comics treat them that way.

What makes a comic a good comic?

A novel gives you the wonderful experience of building a world in your head. It is an inward looking process. A movie gives you the equally satisfying and cathartic experience of submitting your senses and your imagination to another’s vision. You dip into the world of a film. It is an outwardly directed experience. The best comic book lets you spread your consciousness across the inner and outer, the was, the is and the will be. A good comic book gives you a little nugget of transcendence.

Reading a comic is a series of events, but a good comic knows what the essential notes are and only hits those. The rest are left for you to imagine, and the best comics actually leave out more than they show. This does not work on the same scale in the written word or in the motion picture. “Telling” is often a cardinal sin in both written and filmed fiction, but “showing” is a must, and you must “show” a lot or they fall apart. A comic needs to show only enough to push you in the right direction. This is where the best comic books transcend that dividing wall between introspective experience and projective experience. To properly read a comic, you must do both and also be at all the points in between.

The most remarkable aspect of reading a well-crafted comic book is what it does with time and perception. The written word fixes you at a point in time. Your attention must be thus fixed to have a clean reading. A film, being a time-locked medium by definition, forces your perception to exist at a single point in the sequence of the story. And yes, even if the movie is editing between time frames and other wonderful storytelling tricks, you’re still watching only the current moment of it.

The magic of comics is that once you turn that page, you can’t help being aware, from the corner of your eye, of what’s coming up, a vague impression, a premonition. You are aware of what’s on the new page and what you just read past, and you can and do experience all of those at the same moment. Comic books break us out of our shackles of living in a single moment in time and allow us to scan the time of a narrative as a continuum. The best comics work not only as panels but as pages, not only as pages but as spreads, and in that wonder of breaking the boxes of our limited perception through a series of boxes, a great comic offers us a sip of omniscience.