I submitted an image for last weeks Weekend Challenge over at Elysiun. I was thinking of putting it up on this blog when I realised that I have not recorded my previous two etries into the WC either. So here, for my own reference more than anything else, is a list of my last three entries for the WC – along with links to the appropriate Elysiun forum threads, so that I don’t have a hard time finding them in the future if I need to. 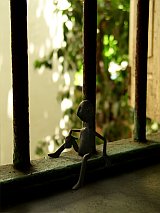 This was a composited image using a regular photograph I took specifically for this project. It started mainly as a test of some compositing tutorials I came across on the forums. It turned out pretty well and the simple character model really did end up looking very lonely. Also, surprise surprise! I actually WON this challenge, in spite of this not being a pure Blender entry. Although it was only by a hair. I later modified some of the shadows falling on the character to make it a little more realistic. You can view that modified version of the image on my portfolio page. 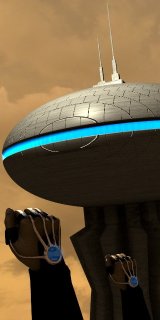 I had a very complex scene in mind for this challenge, which involved sprawling desolate landscapes and futuristic towers littered around the landscape. I managed to complete most of the modelling and texturing, but my trusty old Pentium 1 laptop simply could not handle what I was throwing at it. So, I used the models I had come up with, i.e. the gloved hand and the futuristic tower, to create up a simpler and more iconic image. I was pretty happy with it and liked the slightly renegade look of the scene, but I was not totally satisfied that it was finished. There were only a handful of entries that week and I came in a very far second in the final count. I went on to improve the image by strengthening the ligting and adding a bloom/glow effect in Blenders sequence editor. The modified version is on my portfolio page. Hopefully one day I will get back to these models and recreate the original scene I had in mind. Hmm … 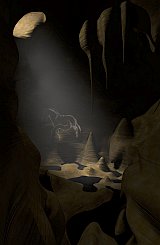 Weekend Challenge #112 : Primitives
Voting Thread
No Finished Projects thread for this one

I decided to participate in a challenge after a long sabatical, not only from the WC, but also in some ways from Blender (barring the Techman character I’v been updating on this blog). While I got the idea early, the execution of it was one of those last minute things and was finished in a couple of hours. I wasn’t very happy with the result, and the challenge that week was very well populated. I stood a far nowhere in the voting. But, I do think this scene is a good start, and I do intend to finish it to my satisfaction. Once that is done the new version will definitely be put up here. Untill then, the latest Weekened Challneg is also coming to a close tomorrow. I’m going to try my best to throw in my hat into this one as well. 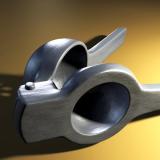 Moth ado about nothing