Did you know that March used to be the first month of the year?

It’s true. In fact, January and February didn’t even exist until they were invented by the Romans around 700BC. And it was a whole 650 years later that Julius Caesar declared January to be the first month of the year. He really liked pushing people around, that guy. But some people refused to be pushed. You’ll be surprised to learn that January didn’t become the official beginning of the year in France until the 1500s. And the British colonies didn’t accept the January New Year until the mid 1700s.

Now put yourself into March’s shoes. It must be the most disgruntled month of them all. How would you like to have enjoyed the limelight for so long and then to be cast aside as simply that calendar month that appears between that very short month of the year and April fools day, and everyone was told to beware of your ‘ides’? Not very glamorous is it?

Purely to make it up to our much loved and very hard working month of March, I present to you this table calendar that you can print out and put together. I hope you enjoy it and I encourage you to forward it to everyone you know who would appreciate the chance for a fresh start.

For all you wallpaper enthusiasts, here are large versions of the illustration from the calendar for your desktop: 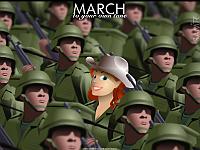 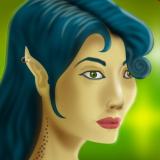 Vector Painting of an Elven Princess