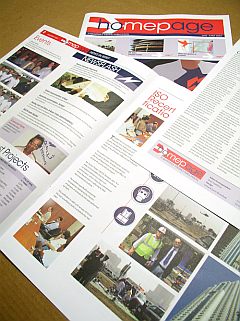 A few days ago I finally received some copies of a quarterly print newsletter I work on with Vishal. I’ve been working on this regularly for over two years now. For most of that time I worked on it with Anjali. In fact we came up with it together from scratch when a local engineering contracting company in Dubai wanted a complete makeover of their in-house newsletter. During that time I had very little to do with design and production, which was handled by Anjali using the standard Photoshop + Illustrator + InDesign setup. At the end of last year she moved home-base so I took over the mantle of getting this done every three months with Vishal’s help. The first major stumbling block was that I didn’t currently own Photoshop or Illustrator or InDesign, and I hadn’t owned or used them in a long time. Since the last few years had been almost completely devoid of large scale print projects for me, I had never felt the need. I had moved on to open source software.

Fortunately, after a bit of trial and error on smaller projects like business cards and greeting cards, I finally figured out how to use my combination of the GIMP, Inkscape and Scribus to take the finished files to an offset production run of a thousand copies. The first time I got them back from print I was ecstatic, but I spotted a few issues with the colour space — nothing that the average person would see, but enough of a colour shift to notice in the photographs and images if you’re an observant designer. The second time around I tweaked my monitor colour profiles and made sure my new customised profiles were applied to the images in Scribus. I’m glad to report that I’m very satisfied with the results in this issue, which you can see in the photographs here. 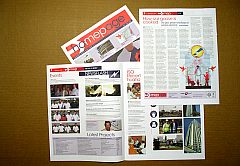 Now that I seem to have ironed out the kinks in the workflow to a large extent, and considering the next issue is going to sneak up on me faster than I expect, I thought it was time to see what was new in my weapons of choice, and what developments I can look forward to in the near future. This is what I found.

The GIMP is probably the most maligned of all the creative open source packages, for its interface, for its ancient core and many other real and religious reasons. But on a practical level, while it may not be the snazziest of the bunch, it is a very mature piece of work. Once you learn how to use it, it easily becomes an unobtrusive part of your work flow. The GIMP is developed in two versions, a stable one for big fixes and a development version for new feature additions, cool new gizmos, and other larger changes which are not quite ready for the big-time yet. Since Windows build of the cutting-edge development version are hard to come buy, I have yet to try all the latest features that are coming up in this software. But, there is plenty to look forward to. The next version will have an improved brush engine and also includes a very impressive image extraction system based on recent research. While the GIMP isn’t part of this year’s Google Summer of Code, there were already many interesting projects completed under last year’s event that should find their way into the next major release. These include a healing brush, a perspective-based cloning tool, and vector layers amongst others. By all indications the current development version with all the shiny new features should be released this summer as version 2.4. That is more than enough to keep me busy for a long time to come.

Scribus, like the others, is in a constant state of development, and the team behind it regularly releases stability and bug-fix releases that are steadily improving the PDF and SVG handling capabilities of the software amongst other things. There has always been a very feature complete and ambitious road-map to this project that has struck a balance between must-have functionality and lower level API changes and core programming improvements. These people have taken on the daunting task of giving the world a viable open source alternative to full-featured commercial DTP applications and they are getting there. Two major new additions to look forward to are to come through GSOC projects over the next few months. We can look forward to an imposition plugin and also LaTeX based mathematical symbol and formula support. While the later is not of direct interest to me in the general purpose material that I work on, it should be a boon to the scientific and academic community who are after all some of the most prolific and vocal users of open source software. Imposition functionality, however, will be a godsend for anyone having to deal with compatibility issues with their offset print shop, or even people doing DIY small print runs which they would like to bind themselves. Here’s wishing the student programmers and the core team the best of luck for the completion of their immediate projects and the longer term road map in general.

I think I can safely say that of the three applications in this print workflow, Inkscape is my favourite. Not because it is in any way more capable than the other two, but because it feels the most complete. the strange thing is that it has felt that way since early beta versions, probably because interface simplicity and installation logistics have always been a top priority with this team. They have always known the Windows user was going to be their major audience and they have made sure to cater to them whole-heartedly rather than grudgingly. It shows in the finished product. Inkscape’s vector tools are a dream to use and this program truly makes illustration a pleasurable process. In fact the handling of bezier curves in Inkscape and in Blender are my favourite implementations of the technology. In my mind they are better than the commercial implementations that I have tried in the way they intuitively fit into the way I think about curves and manipulate them. Inkscape’s development is well planned like the other projects here, but they also have a tendency to drop in unexpected gems into new versions. One such feature in the upcoming version is the line engraving feature. It’s certainly not something I expected any time soon in Inkscape, and you certainly won’t find me complaining about its inclusion. Add to that the very impressive list of seven GSOC projects being worked on and you can be sure that Inkscape is going nowhere but up in the foreseeable future.

As I was writing this post I came across the announcement about the release of Ubuntu Studio on Blendernation. Not only does this new customised Linux distribution include the triumvirate of applications I have mentioned above, but it also comes with a plethora of solutions for sound, music and video enthusiasts that should keep us all busy learning new skills till the end of time. And it includes Blender.

It would seem there are very exciting times ahead for those of us who have made the shift, and those making the shift towards an open source workflow for our collective creative kicks.

What open source software do you use in your work (or play) that you can’t live without? Share your thoughts by leaving a comment below. 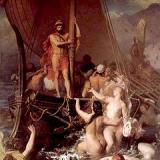 Anatomy of a Distracted Morning