The concept of crashing a wedding, or any other large and noisy gathering of human beings for that matter, is very clear and well understood. The crasher tries to gain access to the said public gathering without the luxury of approval in the form of an invitation. So clear is this phenomenon in the minds of the general population that this complex social interaction has been reduced to a single representational term that is fathomed by even the most naive citizens of the world. They named a mass-market romantic comedy after it, for God’s sake. How complicated can it be?

But what if you had the invitation and were perfectly valid in being at one of these large noisy gatherings, and all you wanted to do was to get out? That certainly complicates the simple world of wedding crashing slightly, hence the need for this quick field guide to anti-crashing in style.

Having found ourselves duly invited to the nuptials of someone in the extended family many times far removed, we were as committed as they come. Not because of any dying need to partake in wedding food or assorted ice creams, mind you, but because we were in charge of the transportation of the big guns. The big guns in this case being my Grandmother who was given special request to attend, being one of the oldest embers of the clan — yes even the extended many times removed one. So on the duly designated Sunday morning we set out into the vastness of Mumbai suburbia with elderly woman in tow on one of the longest taxi rides I’ve been involved in in many years.

See that’s what I call commitment. Crashing out of weddings like all good magic tricks is all about the sleight of hand, and the opportune distractions to mesmerise the audience into a false sense of understanding. Who would possibly believe that we were anything but thrilled to be going to this wedding if we were willing to suffer a nearly 2-hour long taxi drive with precious older loved ones in company, going to a part of the city I’d never been to, on a Sunday morning during my long awaited annual vacation? Would you doubt my sincerity in similar circumstances? I don’t think so. And they tell me men are afraid of commitment. Bah humbug!

After much bumper-to-bumper inching, some open stretches of road, and a few colourful BMC Election campaign parades, we eventually rolled into Kandivali. There was of course the requisite amount of asking strangers for directions and false starts, but Mumbai is generally one of the best places to not know where you are going. People can be very helpful with directions, and the best part is they usually know what they are talking about unlike some other cities that shall remain nameless. We got out of the black and yellow cab in front of the small temple where the ceremony was being held, and stepped into its smoky confines.

The entrance, as in every other social context, is a exquisite art form. If you’re over the top and noisy about it, you will look a little stupid and if you’re sneaky about it no one will know you’re there. In this instance three guys in casual clothes walking in with an old woman in well draped sari (with a little help from my stellar sari skills) was enough of a weird image to make our entrance count. The ceremony was in progress – the Hindu wedding ceremony is as varied as India itself and can range from brief to epic – but we spotted our cousins who were already there, and then our own breed of “casual small-talk” commenced. 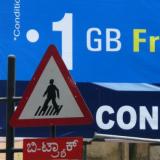