When you visit an un-familiar place, and that too on a tight schedule, you try to pack in as much as is possible into the time you have. This means hitting the spots you’re interested in seeing, and darting between them as fast as you can, while sqeezing in the necessities of sleep and food. What ends up happening is that your memories of your trip are reduced to the big events and all else is forgotten due to the information overload. But every experience is made up as much, if not more, of the little bits that hold it together, as it is made up of the large dramatic events. Having written about all the big stories on my trip to Bangalore, I thought it was time to finish with some of the little bits that come to mind.

Before this hurried sojourn to Bangalore, we hadn’t been there for years, many years. Most of our recent trips to India had been short and we’d never had the chance to drop into Bangalore, where a part of my family lives.

Much had changed since then, including the name of the place. Being the centre of the Indian IT dream, Bangalore had been thrust into cosmopolitanism over the past decade. In some misguided move to stem this tide, they’d renamed themselmes officially to the more traditional Bengaluru. All this translating names of places from one language to another and then considering it renamed is cute, but really must stop in the interest of sanity and the saving of precious resources.

I have visited Bangalore many times over the years. In some distant past, it had earned the title of Garden City, for its green areas, like Lal Bagh, and tree-lined streets, but even in my years of coming here, I had seen the decline of its natural persuations and the growth of a fairly chaotic township, which had too much that was un-city-like for my liking. The Bangalore that I had last seen was stuck in limbo between those two identities. After our visits to natural spots in Mumbai over the previous two weekends, I was not really expecting to equal those experiences in the new Bengaluru. Thankfully, I was mistaken, and we discovered Turhalli. 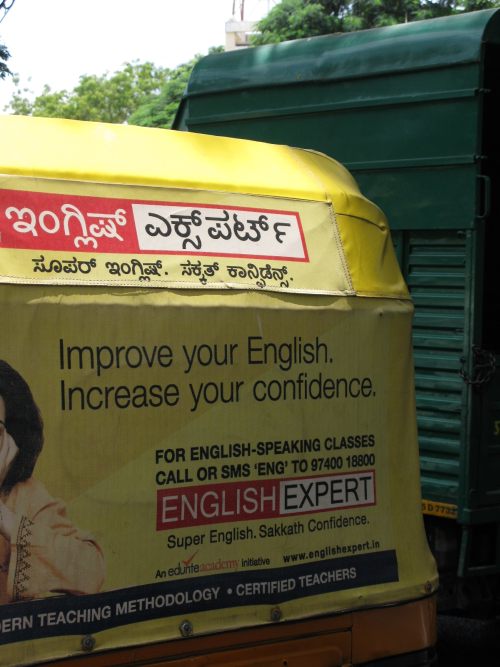 One thing I noticed a lot from the moment we landed in Bengaluru was all the signage in Kannada, the local language. What I hadn’t realised is that it had been a while since I had been surrounded by so much text I couldn’t read. I speak Kannada, but never learnt the script. In the other cities I’m familiar with, Bombay and Dubai, all the non-English text, consisting of Hindi, Marathi, or Arabic, I can read (although I don’t actually speak Arabic). With that in mind, I must say it felt quite strange to go though the streets of Bengaluru and see signs everywhere in an alien language, but an alien language that I could speak. A surreal experience to be sure. 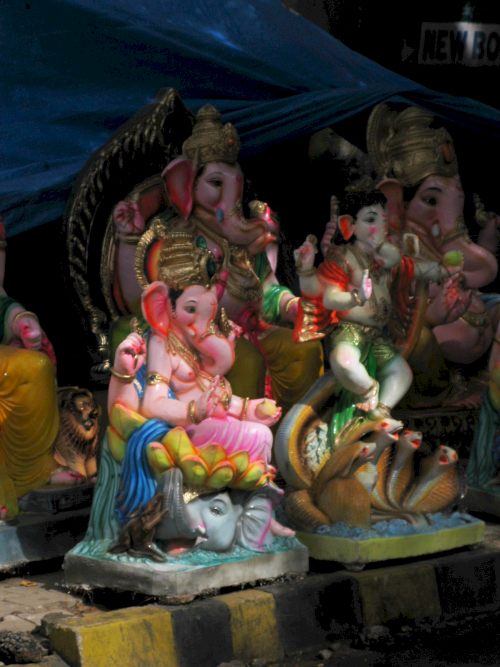 Our first morning waking up in Bangalore we were out on the road. A small bus was hired to accomodate our large group and we headed out into the chill morning air on our way to Nandi Hills. Weaving through the relatively quiet city ctreets, we ended up on a street strewn with Ganesha idols along the pavement. We’d arrived in Bangalore just before Ganesh Chaturthi, an annual festival paying homage to the elephant-headed God Ganesha, or Ganapati. It is celebrated the most in the states of Maharashtra and Karnataka, and this was the first time I was in Karnataka during this time of the year.

In Bombay, Ganesh Chaturthi is big, very big, and the statues of the God in all sizes can be seen on every street corner for weeks. It seemed a little smaller here as a celebration, but quite different, because these statues were all made to the local aesthetic. Ganesh statues back in Bombay are colourful, but these in comparison seemed to have borrowed colour from a much gaudier end of the rainbow. The colours were deeper, the motifs were made to suit local tastes and traditions, and the other startling fact was that all the statues were huge. In Bombay people have small homes, and large statues are only reserved for community affairs, but in Bengaluru, even entry-level Ganesh statues seemed to be large and would have towered over the few-inch-high ones that are the norm in Bombay. In part this was due to the generally larger houses in this city, in part it was overcompensation. 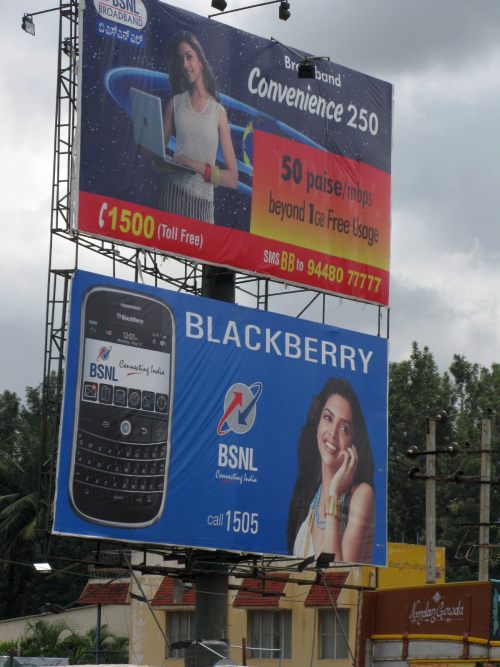 Southern India is renowned for its gaudy exuberance. It is a cultural aesthetic you will find often repeated. Of the cultures of the South, I must say the state of Karnataka is the tamest of the lot when it comes to exuberance, but that’s not to say it is completely free of the effect.

I had already seen an example of this with the Ganesha staues on the street earlier, and then during our sojurn I saw another example on the side of the highway. It was two large billboards for BSNL, a telecom provider, featuring Deepika Padukone, the now famous Bollywood actress. The fact of the matter is, Deepika Padukone grew up in Bangalore. She is the daughter of a famous badminton player, another proud son of this soil. She went into modeling, and over the past few years has become one of the young stars of the Hindi film industry. Needless to say this is a source of great pride and joy to the people of Bengaluru. So it should come as no surprise that she appears on so many billboards there.

The interesting thing though, is the photographs on those billboards. I’ll be the fist one to say that Ms. Padukone is not quite the fine thespian (yet), but even by her standards, those are some of the most outrageously over-acted modeling shots I’ve seen in a long time. They’re practically dripping with syruppy goodness, like many of the ideal-housewife ads we saw come out of America in the 50s. And that’s my point about the aesthetic of the place, because like the US in the 50s, in Bangalore, that overdone smile and over-posed awkwardness, seems to be a good thing. The fact that it is Deepika Padukone is just an added source of salivation for the masses.

In case you were wondering, the Namma in the title above is Kannada for our. This inclination for labling things Ours to make them seem more local and authentic, is quite popular in Bengaluru. They have a large metro rail project in progress at the moment which is officially called Namma Metro, i.e. Our Metro. There is a great pride in what is ours, or at least great PR about what belongs, another unfortunate effect of the sudden cosmopolitain invasion of this city. It’s gone from a sleepy little town to a centre of attention, with people from all over the country and the world living there. As a result it obviously suffers from a bit of an identity crisis. Like all people and places suffering from it, they have chosen the wrong route to strengthen their original culture. Cultures are not preserved by dictating or by forcing them on to people, cultures are preserved by making them so irresistable that the others can’t help but embrace them as their own.

After our magic morning at Turhalli, we said our goodbyes and headed out. We had lunch at a friend’s place and then called for taxis to take us to the airport. This was the first time I was sitting in the new shiny green private taxis that are becoming popular in many Indian cities. For one thing, they were using more contemporary cars than the classic Padmini, and they were much more organised with modern technology. A call centre, digital meters, printed, bills, the works. And as I found out on our trip to Bengaluru International Airport, they are also very comfortable.

The wide windows of the Mahindra Logan afforded me a magnificent view of the landscape, and as we left the city behind, the vistas opened up and the sky displayed its full magnificence. Right from the time we had begun our descent into Bangalore on our flight in, I had noticed how absolutely gorgeous the monsoon clouds were here. They were the usual cumulous clouds, but on a scale that is rarely visible near the coast at Bombay. Bombay is often one of the first ports of call for the full force of the south-westerly monsoons making land-fall, so the skies are usually an impenetrable blanket of clouds and a chaos of winds. I am guessing by the time the remanants of these wind systems make it inland, and over the Western Ghats, they’ve had time to calm down and built these beautiful castles in the sky.

That’s what the clouds over Bengaluru reminded me of, architecture. They were tall and wide, and stepped, and complex. They spoke of other worlds where mere humans could only dream of going. I saw these coulds on our trip to Nandi Hills and it was the very same clouds that now marched along the firmament as we made our way out of the city. The afternoon Sun painted them in million tinged greys and blues, and the occasional pink. As we pulled into the airport parking lot and paid our fares, I was almost sorry that the airport had a roof and that I would have to go without the sights above me. So before the swanky glass, concrete, and chrome enveloped us, I bid farewell to the cloud sculptures in the sky, to the now distant rocks in Turhalli, and headed off to catch our flight. 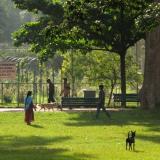 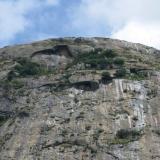 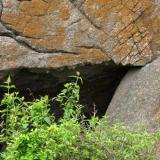