Chance Pe Dance is a Hindi movie by director Ken Ghosh, starring Shahid Kapur and Genelia D’Souza. It’s the story of a struggling actor in the Mumbai film industry, and the people he meets on his journey. If you saw last year’s Luck By Chance, you’d be forgiven for thinking this will be more of the same, but it managed to surprise me on several levels, and left me smiling.

In recent years the Meta-Hindi-Movie, i.e., the Hindi movie about the making of Hindi movies, has become a rampant genre of its own. Not only does it allow for the airing of a ready repertoire of movie in-jokes and the requisite humour at the expense of India’s most popular industry, it also provides a safe excuse to insert more ludicrous song and dance sequences, in the name of realism. Chance Pe Dance could have been the next one in that long line of contenders, but it chooses not. Except for the song and dance sequences, all the other staples I mentioned are pleasingly muted.

Ken Ghosh was a maverick music video drector during that short time in the mid 90s when it seemed India would grow itself an indegenous pop-music scene, free of films. That never came to be, but I still remember the videos by Ken Ghosh with great fondness. In 2003 he presented his debut feature, Ishq Vishk, which was a standard bubble-gum high school romance with every clichÃ© in the book, but executed with a level of polish that was fresh and likable. Unfortunately in 2004 followed Fida, a thriller which was a disaster on too many levels to mention. Now finally he returns with Chance Pe Dance and his constant hero from all his outings as director, Shahid Kapur.

Over time, Shahid Kapur has grown into a very confident actor. His performances are now effortless, which is a rare talent. He did a wonderful job in Jab We Met, and brings the same amount of maturity to his role here as Sameer Behl, which on the surface seems more frivolous. What Shahid Kapur is most popular for is his dancing and that is on full show here as well. I wouldn’t call it his best work, but there’s no arguing the fact that the boy can dance almost anyone else into the ground given the right material to work with. There are also plenty of shots of sleeveless Shahid, and shirtless Shahid, but then you didn’t expect this to be a documentary, did you? Shirt or no shirt, he is a pleasure to watch and a wonderful talent.

Genelia D’Souza is always a surprise package. She shouldn’t work. All the logical signs you look for to mark a brilliant new actress, or even a mere on-screen glamour-doll aren’t quite there. Yet, she manages to hold your attention like no one else could. Like her performance in Jaane Tu Ya Jaane Na, you come out of this not imagining anyone else being able to assay her role as Tina. Similar to Shahid Kapur in some ways, but to an even greater degeree, Genelia comes across as a normal human being, the type you walk by on the street without giving them more than a passing glance, the kind you have as friends, the very same variety that live down your street. At no point do you think of her as an actress, and that is her strength. The female lead in this film was to be played by another actress, before Genelia stepped in as late replacement. I think it’s safe to say that without her, this would be a very different movie, and nowhere as likable.

Genelia’s strengths tie closely into why I like this film. Almost everything about this film is wrong, if you measure it using a checklist of desirable elements. The plot is haphazard, there’s a major plot-twist at least once every 15 minutes, and there are too many struggling-Bollywood-actor-from-out-of-town cliches: the sceptical parents, the hand-to-mouth existence, the lucky breaks, the over-the-top glitz. It’s all there, but it’s also all fairly restrained. The hero of this piece doesn’t just wait around all day for his big break, and has a fairly consistent and mature take on life throughout the story. He does other things, he’s a delivery boy, and a dance teacher at some point in the story. Is a lot of it completely contrived? Absolutely! This is a proper Bollywood movie and doesn’t pretend otherwise. Yet, the only thing I can complain about with no reservation is the music, most of which is by Adnan Sami, and very bad. The film makes up for it with some stunning visuals, an amazing attention to detail from the director, and a very lovable quality that defies explanation. Ken Ghosh gave us some very memorable music videos with the same spirit in the 90s. I didn’t complain about those, and I’m not complaining about this either.

This film gets its title from a popular phrase in colloquial Hindi. Literally translated, Chance Pe Dance means to dance on chance. What it implies is to seize the moment, to make the best of an opportunity. As with the phrase, Chance Pe Dance is a movie that has a lot more to it than the sum of its many imperfect parts. It is very much about seizing the moment, making the best of the opportunities life offers, and generally about working at it relentlessly, even when the path seems unclear. All this, wrapped in a very endearing and human package. Enjoying Chance Pe Dance depends on seeing the forest for the trees, and it succeeded in bypassing my filters for film-trope and flaws by being a likable whole. If you only see the individual trees, you’re in for a disappointment. But I saw the forest, and I loved it. 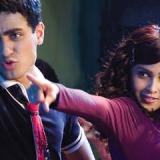