Jab We Met (When We Met – Jab is pronounced like ‘cub’ rather than ‘cab’), starring Kareena Kapoor and Shahid Kapoor, is the second film directed by Imtiaz Ali. I was looking forward to this one because I fell in love with the director’s first film, Socha Na Tha, and I was expecting more of the same.

I’ve only ever written about one other Hindi movie in the entire history of this blog, and that write-up wasn’t the most flattering. If you went by that you could be excused for thinking that I wasn’t a fan of Hindi cinema. Nothing could be further from the truth. I am, in fact an ardent fan of Hindi films, but it just so happens that this year has not been a great year. There haven’t been many Hindi movies which I would wholeheartedly recommend since this blog opened shop, and I just wasn’t interested in whining about the rest of them. Now at last we have Jab We Met, and at last there is something I can gush about. That should have been enough to give up the plot of where this is going. I absolutely loved Jab We Met. After a long time, I was happy to see a simple, straight-forward romantic Hindi film done with class, which manages to be both engaging and endearing.

Jab We Met is a return to the very core of what makes Hindi films so widely popular in a lot of the world outside western caucasian society: emotion. What Hindi films lack in technical perfection and sometimes logic, they make up for in their ability to completely endear themselves and their characters to the audience. Hindi films feel much more that they act and think, and they make the viewer feel with them. This is the reason why a good Hindi movie can stretch to over three hours without boring the audience. Action, events, and plot can only engage so much and keep your mind occupied for only so long before you require a break, and this is where Hollywood is at a disadvantage. Granted this preference for the emotional over the the more tangible might not work on western audiences, but when the rest of the world is numerically a much larger audience, I think Hindi cinema really should stick to its strengths. All these inherent strengths are manifested and celebrated in Jab We Met.

I am well aware of the fact that I have a major soft-spot for the acting of Kareena Kapoor when she is doing a great job, but what it all comes down to for me is the writing of the film. I have found that in the final analysis, I am a sucker for the perfectly written female character — at least perfect in my view of things, because each one of us is bound to have our own preference in that department. What is my definition of the “perfect female character?” Someone who is actually a complete character with a personality, intelligent, behaves like a human being before being a ‘girl’ … oh why bother, this list can go on forever without meaning anything. The best way to put this across is to mention some of the movies I think have these perfect characters: Socha Na Tha (Imtiaz Ali’s previous film), Asoka, The Matador, Bunty Aur Babli, Sunday in New York … and many others.

If all this perfection seems like unrealistic demands to all the ladies reading this, I’m sorry ladies but that’s just the way it is. You don’t hear me complaining when I’m expected to be a subtle mixture of Tom Hanks in Sleepless in Seattle, Arnold Schwarzenegger in Predator, and Sean Connery in Dr. No, do you? Realism is for the birds. If we didn’t all strive for some sense of the idea or seek it, what would make us human? Hindi films remind us of that, and every once in a while some thing like Jab We Met comes along and makes me feel glad once again that I was born into this species. 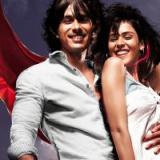