A trip to India usually includes a very liberal dose of cinema tickets for me. On this trip the first film to catch our attention was Babel

. So on a random day when the mood struck us, my Dad, Vishal and I took a long bus ride to South Bombay and stepped into the historical Regal Cinema for our fix. The next day Babel won the Golden Globes Best Picture award. But a few hours before that I had walked out of the darkness of the cinema hall and I loved what I had just seen. In spite of the minor vandalisms by the Indian Censor Board, Babel was quite simply a beautiful piece of cinema. Movies are very much like people, and very much like people we can love them for many different reasons. There are those people who make us laugh, and those that make us feel special, and those that inspire us or make us proud. But if you look carefully you eventually find a small minority that we like not for these sometimes self-centred reasons, but essentially because they are simply impeccable human beings. They are bright and shining standards for the rest of us to live up to. Babel is that kind of movie.

A few days ago, we managed once again to take out some time from our busy schedule of unstructured holiday madness to see another film. This one in contrast was in Hindi, and this one I knew more about before I went in. Not only did it star the current media darlings Abhishek Bachchan and Aishwarya Rai, but more importantly it was directed by Mani Ratnam, a director who has a built a reputation of being a maverick in an otherwise commercially centred film industry, and whose last film Yuva

was a perfect example of an impeccable piece of cinema. I never really have high expectations when I walk into a cinema hall. I think it’s better that way since you start with a neutral grey and whatever splashes of colour or dark stains are formed in the following few hours can be solely attributed to the work on screen. So, I accept no blame for the fact that two hours and some number of minutes later I strolled out of Metro Cinema a very dissatisfied customer. Guru

These two contrasting experiences made me think a lot about the reasons for my reactions and why one had worked and the other hadn’t. There is always the danger of personal bias without basis, but I like to think that I can spot that within myself to a large extent. After all, all the elements were there for me to like Guru – I liked the cast, I liked the director and his previous work, I liked the music director, I liked stories about the triumph of the underdog. There was very little on the surface that I could claim to dislike, to explain my reaction to the film. But it didn’t work for me because, to put it simply, Guru tried to sell me something and I don’t like pushy sales people.

Don’t get me wrong. I’m in many ways a perfect audience because I am more than happy to let myself be swayed by the director’s brush. While you won’t find me bawling when little kittens are killed on screen, I am very involved in my viewing and give in to whatever emotional manipulations the writing and the presentation care to throw at me. To me that release of psychic barriers is part of the experience, and completely detached movie watching would seem like a waste of time. But, I am also one of those people who hate it when over-zealous sales people follow them around shops asking how they can help them at every turn. I find this especially unacceptable in a book shop, and just as unacceptable in cinema. 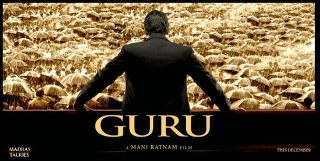 Guru was (semi-officially) meant to be a biopic of Dhirubhai Ambani, the founder of India’s Reliance Group of Industries, and his rise from village dreamer to big boss industrialist. I don’t know how true-to-life this treatment was, but I can only judge the movie based on its content and in my book this story had too many holes in it. The movie was trying to sell me an inspiring tale of a man who stands up to the establishment, outsmarts the establishment, and scores one for the “common man” by becoming rich and powerful against all odds. It was meant to be an extravagant cinematic homage to a great achiever. Then why is it that to me the protagonist came out looking … well, a little stupid. I’m all for fighting the odds, but how is using illegal criminal techniques supposed to convince me of your intelligence? I’m all for challenging the establishment, but how is that an excuse for setting up what is basically a publicly-traded monopolistic giant with a simple-minded godfather at the helm? If this is someone who I’m supposed to look up to, why does he resort to simple muscle and straight forward smuggling and deception? If this man is so smart and powerful, how come he has to blatantly break the laws of the land rather than bend the laws to his will? All this doesn’t sound very praise worthy here and it didn’t come out looking praise worthy to me on screen. That in itself is not a crime of course, because movies about less scrupulous people have in the past gained great respect. But what makes this one ridiculous is that they are trying to sell me cheap soap with added water while talking about extra hair proteins and special fruit-extract vitamins in a patented formula to make your hair luscious and practically gravity free for a better sexual life. I’m not buying. 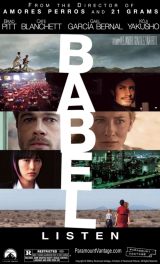 Give it to me straight. That’s what I would have appreciated in Guru, and that’s exactly what you get with Babel. Babel tells it like it is, warts and all, with no convenient morals or well crafted religious fervour. So much so, that for many viewers Babel could be very uncomfortable to watch. It reminded me very much of Children of Men

in that department, and like that film, it needed to be handled like this for maximum impact. What is Babel about? The thing is, there is no single simple answer to that question, and that’s what makes it work. Babel is life, and life is not a tag line or a manifesto or a religious myth. Life is simply the way it is and we each take from it what we wish. I could say Babel was about a gun, or about children, and I would at once be right and also completely wrong. To try to explain in any further detail what Babel’s story is would be doing it an injustice. Just know that it is worth a watch if you like sincere people, because Babel is a very sincere piece of film-making with a lot of heart. Babel hands you a plain chunk of soap and asks you to do with it what you may. No imaginary added hair tonics, or anti-bacterial nano machines, or moisturising colloidal vitamin substances. Just wash, rinse and repeat.