Once upon a time, at the height of the Soviet era, Russia and India were good friends. And not just the kind of casual acquaintances who exchange pleasantries across high-level conference tables; We were friendly enough that the two peoples were interested in how the other lived and thought and dreamed. During this era of cultural exchange, it was quite common to come across Russian literature and Russian published technical books on the bookshelves of academia and the street corners of Bombay. Mir Publishers was a well recognised name in Indian geek circles and I still have some of their books on quantum physics and other miscellanea in my collection.

But that is now. At the time I was one of the millions of kids growing up in metropolitan India whose staple for entertainment was Star Trek (The Original Series)

on the single terrestrial television channel on Sunday mornings, and comics that included a healthy dose of The Phantom, Mandrake the Magician and the entire cast of swash buckling Indian Gods and Goddesses from the talented people at Amar Chitra Katha. But if you were really lucky, like me, and you had parents and family members who were book nuts, you were also treated to the weird and magical world of illustrated Russian story books.

What made these books any different from all the other fairytale literature read by children in the rest of the world? It was the fact that the Russian fairytales didn’t pull any punches. Fairytales in their origins in pagan folk tales and medieval bardsmanship were never designed specifically for children. Also, at the time children weren’t seen as as much of a distinct and separate group of human beings as we condescend today. These original stories were wild and vulgar, with plenty of violence and ribaldry. They captured the human experience in all its shades, glories and failings, and they set it alight with the brightness of the magical and the arcane. A mere sliver of that blazing inferno of humanity survives in the remnants that we now serve our young ones under the respectable banner of fairytales.

As a kid, I would spend many exciting afternoons spread on the floor, mesmerised by those Russian story books. They were often hard bound beasts that would give any modern children’s ergonomics expert nightmares, and red was a popular motif on their covers. The paper was like a thick porous vellum and the weightiness of the stories it told were lent an extra dose of gravitas by its substantial appearance. In my early years of reading, the words did not fascinate me as much as the pictures, and what pictures they were. For those of you who have never had the privilege of bearing witness to a piece of Russian illustration or animation, I might not have the power to describe the images I saw in these books. Woodcuts, lithographs, sparse paintings, and bold etched graphic images all vying beyond the call of their duty to describe the magnificent landscapes and the heroic characters of distant worlds. The memories of that vibrant imagery, the rustle of the thick pages under my small fingers and the heady scent of printing ink and vintage wood still fill my heart with joy today.

That is the world I grew up in and those are the stories I lived – where men were brave, women were strong, and “evil” was a human failing with supernatural consequences – where bad things did happen to good people occasionally and suffering was real, but ingenuity always triumphed. That is the world I grew up in, but unknown to me the rest of the world had changed. Kept enthralled in the darkness by the menagerie of beauty that was the illustrated Russian story book, I had not realised that elsewhere, the things I had come to know as fairytales no longer existed. Children were instead being fed sanitised, pulverised and re constituted drivel with all the subtlety, depth, and darkness of melted candy-floss on a hot summer afternoon. That is probably the reason I never read many regular children’s books as a child, because all the rest seemed like fabricated falsehoods after the richness that I had know. In the next few decades fantasy became an acceptable pass time for adults as well. Hence was born the summer blockbuster movie. But even with all the prosthetic magic and the digital gore, none of them ever captured the balance of the innocent magic of those old tales with the down-to-Earth honesty of them. Then recently, I went to the cinema to watch Stardust

In a word, Stardust was enchanting. That’s really as much of a “review” as I wish to give it, because any further dissection of the specifics of the plot would be purely academic. I highly recommend to anyone who enjoys a good old fashioned fairy story that they watch this film and prepare to be entertained. Stardust embodies that wonderful balance between beauty and darkness that I so enjoyed in the stories of my childhood and I was very pleasantly surprised to see that that ethos can still survive in the commercial format of a major Hollywood release in today’s hypersensitive world. Granted, Stardust is nowhere as dark as some of folk tales I read as a child, but there are limitations to what can be achieved in a PG-rated family film, and within that constraint what this piece of cinema achieves is remarkable.

. I am a huge fan of that movie and I know many people who also swear by it as their favourite piece of cinematic fantasy. While it is never an easy task to construct direct comparisons between two pieces of creative work, I can safely say that Stardust compares well in the madness of its spirit and the quality of its writing with something as seminal (to me at least) as The Princess Bride.

To explain what makes this movie magical in my mind, I can only leave you with some mental images to savour. Stardust has falling stars, dying kings, magical creatures, protective unicorns, three evil witches, a flying pirate ship, a chariot pulled by goats, royal intrigue, magical markets, an imprisoned princess, enchanting enchantments, and a quest for true love and other fantastic creatures. And to make this all worthwhile is a bunch of smart characters with snappy lines who do not talk like they just walked off the sets of a Shakespearean re-imagining.

Strangely enough, Stardust is based on a book. An illustrated story book

, in fact, by Neil Gaiman. So even though I have never read the source material, perhaps I am not imagining the connection I see between this “old style” fairytale and the illuminated stories of my youth. With Stardust I am encouraged to see a new hope for the vein of fantasy stories that I learned to love as a child. Tales of enchantment where men were brave, women were strong, “evil” was a human failing, and ingenuity always triumphed. My memories shall for ever be punctuated by those red covered tomes, with their their fragrant pages, their frozen scenery, and their shimmering stardust. 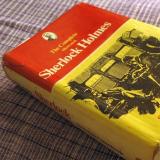