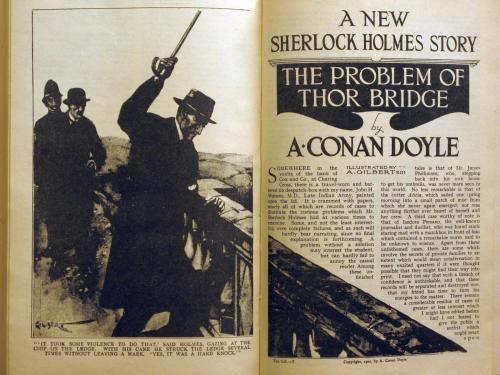 I don’t remember the first time I heard the name Sherlock Holmes. There has to have been a first time. Maybe someone mentioned it, or perhaps I picked it up in a movie or a comic book. The details of our first encounter remain shrouded in the mists of my early childhood memory. But, however it is that I got to know of the illustrious detective, I do know that at some point I read a small story in school about the doctor who Arthur Conan Doyle used as inspiration for his creation. It was that description of the mental prowess of a Doctor Joseph Bell that made me want to read about Holmes.

At the time, I remember not being able to find an original unabridged Sherlock Holmes book in the sparse bookshops of Muscat, so I turned elsewhere. One of my father’s business contacts in the UK was put on the job and when he visited next, he brought with him three pristine Penguin paperbacks starring the detective. They were The Case Book of Sherlock Holmes, The Valley of Fear, and The Hound of the Baskervilles. I remember getting a tin gift box of Cadbury chocolates along with the books, but I kept it aside and stared at the books instead. They were my treasures. At the time, I used to have no trouble finishing a small book within a day, so my treasures were read and devoured in no time, and I loved every syllable. To this day, The Lions Mane, The Veiled Lodger, and The Sussex Vampire remain dear to my heart because of the deep impact they made on me at the time.

Penguin books, like many books by large publishers, have a helpful little marketing section at the back where they inform you of other books in the series. I knew I had to have more, and there were so many tantalising Sherlock Holmes titles that I had never read. Then I turned the last page, and there in crisp black print was announced the ultimate prize. “The Complete Illustrated Sherlock Holmes“, it said, and went on to list all the novels and short story collections it contained. That was the one I had to have. With no straightforward way of getting it at that moment, I waited. I re-read what I had, especially the short stories, several times. One weekend I even sat down with a bit of playdough and crafted a rough 3-inch-high black bust of Sherlock Holmes in his classic deerstalker hat from the illustrations, and his pipe, with a bit of white stuff for his collar. That remains my sole attempt at sculpture to this day.

In a few months it was summer and the schools closed for the holidays. We would often spend two of the three months of our summer vacations in Bombay, and my mission was to make every attempt I could to lay my hands on The Complete Illustrated Sherlock Holmes. Keep in mind that this was a time long before the internet. In fact, my Grandmother’s place in Bombay, where we stayed, didn’t even have a telephone. So, tracking things down was not as easy. I believe it the search began with a Penguin India address from one of the books, and then moved on to more tradional footwork. Our local raddhi-walla (Small shops that are part private paper recycling depot and part second-hand book store) was usually good at giving us tips on books, even the ones he didn’t have. He told us that Rupa publishers had one of those big books of Sherlock Holmes stories. After some directory queries over public phones, and talking to various receptioninsts, we finally got our hands on a number which was said to be the final word on whether or not a Rupa & Co book was available in the city.

The call was made, and the voice on the other end casually said, “Yes. We have that.” The very next day, or maybe it was the same day, we set off on a quest. The number we had been given was the central Rupa & Co. warehouse of sorts in Bombay, somewhere near Grant Road. I wasn’t as familiar with those parts of the city as I am now, so I couldn’t pin point where this place is now. All I remember is my Father and me getting off a bus near a large flyover, and after much asking around and walking, we ended up in a side lane that was a dead end. It was the start of the monsoons and though the day was dry, puddles of water dotted the tar. The neighbourhood kids were taking the chance to play some cricket, and we navigated around them seeking our temple. Somewhere towards the end of the cul-de-sac was a small structure with Rupa & Co. printed unglamourously on a metal sign board. We entered.

The place was organised chaos. It appeared to quite literally be a large storage space, filled with row after row of slotted metal shelving from floor to ceiling. And on that shelving, as far as the eye could see, were books of every size, shape and colour. Mountains of them! The man at the rudimentary office desk near the door looked up at us quizically, wondering if the man and the boy had taken a wrong turn and were asking directions. He remembered our call when we mentioned the book and got up to find it. We followed him through the maze, left and right along the grey shelves and the unending stacks of literature. I thought I was in paradise, because even our school libarary didn’t have so many books. After a short walk we came to another identical shelf and the man reached up for what he had been looking for. He pulled down a large hard cover tome with a yellow and red dust jacket, and on the cover in old-style ink illustration were the figures of Holmes and Watson sitting across each other at a train window. We asked how much. The man stated the princely sum of 150 Rupees. We walked back to his desk at the entrace, paid and walked out with large smiles on our faces. In spite of the treasure trove of books I’d just left behind, I couldn’t wait to get home. 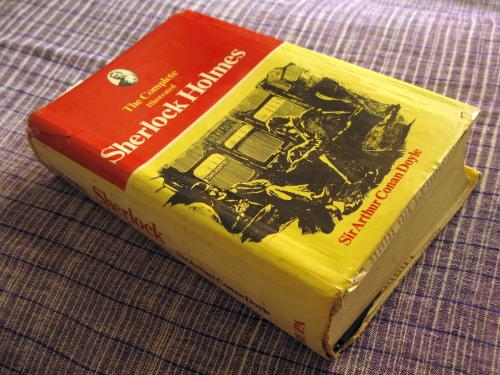 That very evening I began to read A Study in Scarlet, and went on to read the entire collection from cover to cover over the following six weeks. Having absorbed a lot of books before reading Sherlock Holmes, and having read even more since it should come as no surprise that books have been a very important influence in my life, my thinking, and the person I have become. But, I can’t emphasise enough the impact Sherlock Holmes had on me. If I had to ascribe my character and my viewpoint on the world to any one book, it would have to be that collected tome of Holmes stories. That book changed me in ways even I might not realise yet.

For one, it cemented in me an appreciation of good writing, and an ambition to write myself someday. While all and sundry celebrate “the classics” of literature I was never one to put much stock in them. From the very beginning, I chose to read whatever drew my interest, irrespective of how credible or not the book might have been in common view. Sherlock Holmes showed me that excellent writing can come out of pulp entertainment. We must remember that Sherlock Holmes, at the time of its writing, was popular fiction, pulp really. The stories appeared as seriasations in a magazine. This was never considered high-art and yet it was better written, more engaging, and had more intelligent things to say about the World and humanity than many of the classics I did choose to skim through in later years. That combination of complete entertainment with depth of thought was one of the major lessons that stuck with me from my encounter with Holmes. To date, I always hope my work can be even half as succesful at striking that balance as those stories were.

More impactful than the effect Sherlock Holmes had on my appreciation of the written word, however, is the impact he had on the boy that read about him. Sherlock Holmes changed me by consolidating parts of me that were already there. Many aspects of Holmes’s character were familiar because their kernel existed in me, and after reading of Holmes, they grew. From the almost laid back observation that he was so good at, to other quirks like him knowing a lot about some things, and almost nothing about other things, so as to not waste his attention on things he didn’t need to know about. My complete lack of insight into sports and English pop-music surely falls under this category. I became Holmes, because I realised that it was ok to do so. Because, in spite of his shortcomings and his excentricities, Holmes was an admirable character. He didn’t have some of the pleasures and comforts of “normal” life which others did, but he liked what he did, he enjoyed his life, and was utterly good at it. He also helped people. How could that be a bad thing?

That’s not to say I took on the character of Holmes without censorship. My lack of addiction to cocaine should be sufficient proof of that. After all, he was a fictional character, and I was impressionable, not stupid. When I read the cases of Sherlock Holmes, I always identified with both the main characters. To me Holmes and Watson were a single unit, like two aspects to a complete personality. Holmes might have been the authority figure and main driving force, but he was nothing without Watson as a balance, and as a foil to work off. If anything their relationship instilled in me an appreciation of the importance of moderation and balance in all things.

I would go on to see many films and adaptations of Sherlock Holmes. Some like Young Sherlock Holmes and the recent Sherlock Holmes movie I enjoyed, while others like the utterly baroque BBC TV series, I didn’t appreciate. I had seen in the original stories a spirit that few were able to capture, because all they were seeing were the horse carriages and a language that was on the fringes of their comprehension. For me it was always about the spirit. Which is why the original books have always remained, for me, the dearest glimpse into the life and times of my favourite detective.

And that, dear reader, is how I met Sherlock Holmes, how I got to know him, and how he became my constant companion, even when I have gone many years without reading his stories. While I can’t claim his mental prowess, in many ways I have come to think like him, or perhaps just see like him.

We all chose heroes and idols to emulate throughout our lives, people we identify with, or people who we aspire to be like. When I first met Holmes, I didn’t decide to be like him, but instead he simply taught me that it was a perfectly valid option to be like me. While that confidence can be attributed in buckets to seemingly more important things in life, such as my wonderful parents, the times I grew up in, an interesting childhood, and a freedom to think, I can’t help but think that I would have never turned out to be quite the person I have become if it had not been for my friend, Sherlock Holmes.