Like most people, I didn’t even know they were making a new X-Men movie until I heard some buzz online and saw the first character shots. It all looked harmless enough. Then I saw the first trailer in the cinemas, and that got my attention. But what sold me on seeing this film was that Mathew Vaughn was directing it. I’m glad I did, because out of nowhere, the man has given us one of the best comic-book movies ever.

Departing completely from the first trilogy of X-Men films, X-Men: First Class takes us back in time to the beginnings of Charles Xavier and Erik Lehnsherr, to the story of how they met and became the central figures of the X-Men mythos, as we see later in the comic books and movies. Set in the 60s, before and during the Cuban missile crisis, it takes us through how Charles Xavier first begins his quest to find and help his fellow mutants, trying to be a positive force in the greater humanity, and how it leads to the birth of the X-Men, and Professor X as we know him, and Magneto.

This strange faux historical fiction of this fantasy universe allows the film to have a great cast of younger actors essaying all the roles, and makes for a film that is a lot younger in mood and more cavalier in spirit. A wise decision that takes this film well above the forced gravity of most super-hero stories in recent times. X-Men: First Class gets what comic books most often get right over other mediums, and that is to concentrate on the story, the entertainment and the engagement of the imagination, while letting issues and subtext be a secondary layer of the magic trick. The earlier movies were a little prone to let subtext take over the proceedings and it is wonderful to see these stories return to their roots.

It’s difficult to critique or praise very specific elements of X-Men: First Class, because while it leaves you remembering the minutest of details, it works so well as a whole package that singling out smaller technical aspects would turn into extremely repetitive gushing or petty nit-picking. The sounds, the visuals and the camera work are all extremely convincing. Director of photography, John Mathieson‘s not too dramatic camera work is an essential element to the straight-forward mood of this film. That might sound like a consolation rather than praise, but it is a huge challenge to not go overboard with visual drama, especially as technology makes it easier to play with light and camera work. Mathieson has much dramatic photography in his portfolio of films, so the good, solid, clean photography here was obviously a conscious decision. The same can be said for the CG and special effects department, which has done just enough to convey what needs to be, but never too much. This restraint pays dividends in keeping this film focussed on the important stuff.

The important stuff I am referring to is the cast, without whose frankly stellar performances, this film would still be a vaguely dubious artefact. Jennifer Lawrence plays a younger Mystique with an adolescent innocence which is a great foil to the provocative nature of the character in future times. Zoë Kravitz as Angel Salvadore, Caleb Landry Jones as Banshee, Lucas Till as Havok, and Edi Gathegi as Darwin are all sufficiently filled with promise and teenage bravado in their roles, and Nicholas Hoult plays an endearing young Hank McCoy/Beast. However, when they’re on it, the screen undoubtedly belongs to Michael Fassbender as Eric and James McAvoy as Charles, because that’s who they are here, Eric and Charles, with none of the baggage that comes with being Magneto and Professor X.

McAvoy plays Charles Xavier with an intelligent frivolity that makes him endearingly human. His trying too hard to be a charming, normal human being while using his extraordinary powers to help, makes for very entertaining viewing. Fassbender is a revelation of a different kind. His lines are few and crisp, and he brings a true vulnerability and intensity to the haunted Erik Lehnsherr that has you cheering for him throughout the film, even into his inevitable role as Magneto. Fassbender does such moving things with his face in this film, that his on-screen ability to manipulate metal pales in comparison. My compliments to the crew for making an action film that relies so much on close-ups, giving the actors the latitude to work their true powers.

The one stray dubious artefact of this cast is January Jones as Emma Frost. Her on-screen presence is cold in all the wrong ways and she never seems to quite get into any character other than her own. The choice to use her reminds me very much of Halle Berry as Storm in the previous movies (more on that later), but in this case it is a minor irritant in an otherwise marvellous film. A big part of the marvel of it comes in the form of the Kevin Bacon as Sebastian Shaw. He’s quite brilliant as a middle-aged Nazi scientist who taps into Erik’s powers when he is a kid, and he’s resplendent as a more youthful super-powered version of himself later on in the story. He makes a worthy villain to the piece, and Emma Frost thankfully blends into the background while hanging off his arm. 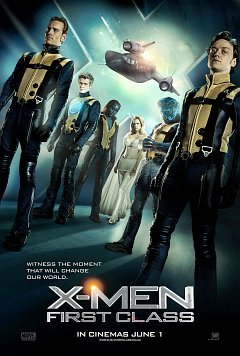 While the Director, Matthew Vaughn has been involved in film-making for a long time in various capacities, his list of credits as director is now only four films long, including X-Men:First Class. His first, Layer Cake, was a gritty and stylish crime thriller, and it could have been single-handedly responsible for getting Daniel Craig the role of James Bond. Stardust was a beautiful fantasy fable that I thoroughly enjoyed, and now comes First Class, which as I mentioned before, is quite possibly the best comic book movie ever, for the fact that it’s not only entertaining and gripping but manages to get the superhero team dynamic to work on the big screen. No small task. Vaughn has a wonderfully varied repertoire and I am now very curious to see Kick-Ass, his only directorial venture I haven’t seen yet.

The first X-Men movie was a great piece of action fantasy, and Bryan Singer (who was still involved in the story and production of this film) got a lot right in setting the tone for what superhero movies could be. You had Patrick Stewart as Professor X, Famke Janssen as Jean Grey, Rebecca Romijn as Mystique, who will ever forget Hugh Jackman as Wolverine, and Halle Berry as Storm. Wait, what?! Yes, exactly, those films suffered from their own big budgettedness (that is too a word), and due to their expensive star-cast and similar extravagances, they famously had to cut back on a lot of ideas. For example the idea of showing the winged Angel character was cut because the special effects shot with the CG wings was too expensive for the short homage that it was. Another thing they obviously cut out was any true attempt at having team battles. Every fight took place between two isolated characters and happened in sequence, giving the films the feeling of a very high budget beat-em-up video game at times. A team superhero movie without the team fighting and acting together at most times lost part of the point of tackling the X-Men on the big screen. And then they started doing some really strange things with the sequels. So pointless was the third film in my mind that I’ve never even bothered to watch the one-off Wolverine film. 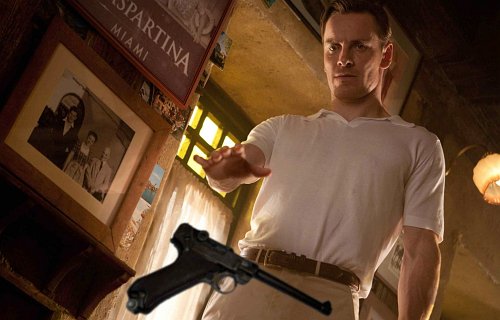 The reason I’ve spent so much time talking about the (now) old X-Men films is that as astonishingly good as X-Men: First Class is in isolation, it is even more remarkable in how it improves on the earlier trilogy by cutting back. I remember the older films (mostly the first one) and their drama, and the some of the action set pieces, and broad things like that, but very few of the characters and their stories come to mind, because those movies were just not paying as much attention to the human element. The spectacle and subtext did take over, in spite of them starring many of my favourite actors. X-Men: First Class, in comparison, is first and foremost a human story, and it is a celebration of human stories brought to the foreground using these more-than-human characters. The film works because of all the things they hint at but don’t elaborate on; I would gladly watch an entire film of Eric Lehnsherr tracking down former Nazis for revenge, or Charles Xavier’s adventures in Academia, or Charles and Eric scouting for mutant talent (which is included in a great little montage in this film), or even the two of them training themselves and their team to control their powers. All those things would make for great material in isolation and yet these people manage to put all of it into one film that both fulfils your every comic book dream and also leaves you wanting more.

X-Men: First Class is one of those films you start watching and you can’t stop watching, with your eyes shifting away from the screen only when the credits role. That is a rare commodity, even in the spectacle-a-minute film-making of the times. While I wouldn’t force the topic, I would love to see a sequel, or several sequels, or prequels, or any one of those side stories I have already mentioned, because what this cast and crew has started here is good and I hope it is the sign of more and better things to come. Stories about superheroes that depend so much on the human element in such an effortless manner deserve to survive longer. Even if they don’t in practice, they will in spirit, because I think Matthew Vaughn has a deft hand at crafting fables, no matter what world or time they’re set in.