As Source Code begins, a train is pulling into Chicago. Captain Colter Stevens (Jake Gyllenhaal) wakes up leaning against the train window with the landscape rushing by. Disoriented, he tries to recognise the woman sitting across from him and talking to him as if they are friends. The last he remembers, he was flying a helicopter in Afghanistan. All around, people are going about their routine commute and the woman talking to him (Michelle Monaghan) insists on calling him Sean. He excuses himself and heads for the toilet. He checks his wallet, which does indeed belong to Sean Fentress, a history teacher who looks nothing like him. Yet when he gathers the courage to peep into the mirror over the sink, the face of Sean Fentress stares back at him.

Stevens is soon violently removed from his railway surroundings and finds himself strapped into a seat in a dark claustrophobic capsule with mechanisms, dials, and a lone display screen glowing with the image of a woman in a military uniform (Vera Farmiga). She knows his name, his real name, and she is his only connection to the world he remembers. She must help him make sense of it all, remind him of his mission and get him to go back into that simulation of 8 minutes on a train, the source code, and find what they are desperately looking for.

I’ve always been a fan of science fiction writing, and in my mind the short story format is raised to greater heights of excellence by the genre of science fiction. The limits of length are further stretched by needing to communicate the plot, characters, surroundings, and also the peculiar scientific or fantastic premises without which the rest would be meaningless. This brings to most science fiction short stories a healthy frantic pace which makes for exciting reading. Short stories have always made better movies because they have the singularity of plot and purpose that works within the time constraints of commercial cinema, an aspect which makes novels particularly challenging to adapt faithfully to the motion picture medium. Source Code is that perfect, meaty, science fiction short story movie with a frantic pace and a clear-cut story to tell, but not before it has twisted your mind a little and made you wonder about the nature of things, as it hurtles head-long into a conclusion. 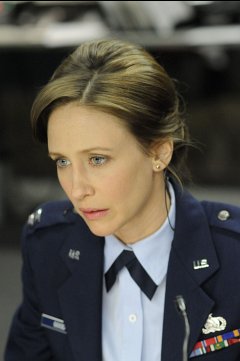 Jake Gyllenhaal gives a solid performance in a film that chooses to concentrate on human faces and minute expressions in spite of its action-packed premise. He shows a great maturity and nuance in what could have been a stereotypical hero, and brings an earnest and human quality to the film. Michelle Monaghan is appropriately pleasant and concerned as a woman travelling into the city with her long-time fellow traveller Sean, who doesn’t seem to be himself. And Vera Farmiga is wonderfully dutiful, official and apologetic as Goodwin, Colter Steven’s handler on his vital mission into the source code. There are strong performances by all involved, including Jeffrey Wright playing the head of the operation, Dr. Rutledge, and various commuters on the train as they react normally to the growing aberration that is Colter Stevens on their routine train ride, but it is the three main characters and their expressive faces that carry most of this story.

Director Duncan Jones helms this enterprise with handfuls of understated class and confidence, which makes me want to watch his previous outing as director, Moon; I have heard it is similarly simple and effective. He lets the demands of the story and the characters make the decisions of what is required and what isn’t, leaving us with refreshingly minimal film whose taut editing (Paul Hirsch) and sparse special effects give it the feel of an undiscovered gem from a forgotten time. This method of tackling a story is admirable, brave, and makes this a better and more timeless piece of film making.

Above all other considerations, Source Code is a thoroughly entertaining film. Into its main spine of thrills and science fiction, it mixes small, but significant, doses of humour, human nature and haunting ideas gently touched upon, instead of forced down the audience’s throat. In its minimalism and succinct cinematic language, it reminds me very much of the crisp thrillers of the 70s, a genre I would welcome back with open arms for both its content and execution. Source Code is film making at its best and science fiction in its most fundamental state. All involved in the film deserve that their work be given your time and attention; It’s sure to be one of the most entertaining 8-minute train journeys of your life.