Of all the stories of supernatural heroes in the Marvel Comics universe, that of Thor, the God of thunder, is unique in that it was not an outright invention. Norse mythology was interpreted and integrated into the modern world in clever and campy ways to create an entertaining and larger than life character. That was the other thing about Thor; While Marvel made its name on the backs of teenage-angst and utterly human and flawed heroes, the God of thunder, while flawed, was larger than life even in the world of the comic books. That balance between human and God was always a tricky balance to handle, which the comic books started off dealing with using the old secret-identity trope, but they later discarded that in favour of making Thor a complex character in his own right.

Director Kenneth Branagh’s Thor sticks with that decision to explore Thor more thoroughly, but also tips its hat to the original ideas of the God of Thunder having to learn a few things by being human. The movie achieves that balance, not just in the character, but in its entirety, leaving you with an experience that is both enjoyably human and intensely mythic.

The realm of Asgard, in all its gilded magnificence is where a lot of the story unfolds, adding weight and gravity to this tale. In a different time this part would have been either glossed over for a lack of ability to execute it visually, or it would have been made a mockery of by the half-hearted attempts at rendering such a fantastic place real on celluloid. Today, computer graphics come to the rescue and Asgard is a true wonder to behold. It is created with splendour and nuance, majesty and intelligence, and some of the interpretations of the old sights from the comic are bound to bring a smile to your face for their beauty and cleverness.

It is, however, the human element that will make this film a lasting favourite. Chris Hemsworth is variously gallant, a buffoon, vulnerable and thoughtful as Thor, a feat that is admirable considering how easy it would have been to make this character a caricature in a costume. There could have been no more grand a choice for Odin than Anthony Hopkins, who plays the role with great restraint and understated power. Thor’s Asgardian friends in arms add a welcome texture to the story and they are ably assayed by Ray Stevenson, Tadanobu Asano, Josh Dallas, and Jamie Alexander. In a fleeting role as Thor’s mother Frigga, Rene Russo makes you wish her role was more involved, but she is good while she’s around.

On Earth, Stellan Skarsgård and Kat Dennings bring in healthy doses of mirth playing colleagues of Jane Foster, a central character in the comics, and Thor’s human love-interest. Here Jane is played by Natalie Portman and is now a physicist rather than a nurse, to fit her into the updated mythos of the story. Portman is effervescent and accomplished as Jane and plays an enthusiastic and smitten young scientist with a casual flair, a welcome foil to her more intense roles of recent times.

For me the best surprise was Tom Hiddleston, who plays Loki in the most balanced and un-theatrical way that you can imagine in so theatrical a story. This film fleshes out Thor’s brother as a much more complete character than you expect of antagonists in comic-book movies, and his intensity and earnestness make him the one to watch on screen when he is in his element.

All these choices of character and motivation can be assigned in no small part to Kenneth Branagh, who not just gets these sometimes intense and sometimes frivolous performances out of his cast, but also chooses the best techniques in capturing the performance and enhancing the effect on the audience. With the help of Director of Photography Haris Zambarloukos, Thor makes liberal use of close-up shots of faces, a strange choice for a film of so much spectacle, but the camera’s intimacy grounds this story very much in humanity, and the experience is vastly better for it. Branagh has a strong directorial style that, as in the case of masters of storytelling in any medium, dissolves into the background until you specifically pay attention to it. This balance between subtle and flamboyant is a thread that runs through every aspect of this film and is what makes it work. 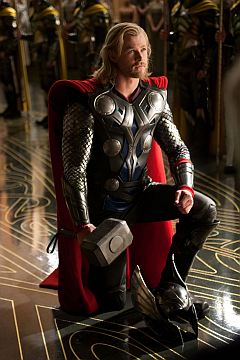 As they managed to do with Iron Man, Marvel have created a version of Thor, possibly their most super-human and theatrical character, that is mythical and yet intimately human. Most importantly, Thor is extremely entertaining and consistently humorous throughout its running time. The point of comic books, beyond their many subtleties, was always to be entertaining and grand, and Thor manages both with style while switching effortlessly between the realms of a vast cosmos and a small town in New Mexico. That is no small feat for a story about a man with a red cape and a magic hammer, but this one strikes the perfect note. I for one will await Thor’s return in The Avengers with more than a cautious optimism.