All good art reintroduces you to a part of your humanity. Rakeysh Omprakash Mehra‘s Delhi-6 does just that, many times over during its running time. Starring Abhishek Bachchan, Sonam Kapoor, Waheeda Rehman, Rishi Kapoor, Atul Kulkarni, Divya Dutta, Deepak Dobriyal, Prem Chopra, Vijay Raaz, Pavan Malhotra, Supriya Pathak, Om Puri, Sheeba Chaddha, K.K. Raina, Aditi Rao, and Cyrus Sahukar, it is an energetic tale of urban India with a mythic quality usually assigned to stories of a much more ancient variety. Roshan(Abhishek Bachchan), a fairly Americanised young man whose parents moved there decades ago, is unexpectedly thrown back into a small locality of old Delhi when he offers to bring his ailing Grandmother(Waheeda Rehman) back to India; She wishes to die there. What follows is an intricate study of humanity, of a small slice of India, how it affects Roshan, and how he affects it.

Trying to fathom a director’s intents from the finished product is near impossible and fraught with the perils of personal agendas. Yet, it is the only way we can think of a work such as this, which occurs as much in the mind of the observer as it does in that of the creator. Rakeyesh Omprakash Mehra continues his exploration of the human condition. In some ways he returns to a topic he holds dear, which he tackled in his first film, Aks. His first popular film (an understatement) was his second, Rang De Basanti. If Rang De Basanti was about a youthful rage against the system, Delhi-6 is about the inevitable realisation in every thinking human being that we are the system. This shift of focus from external ‘others’ to the internal ‘I’ makes for a truer and also more uncomfortable movie to watch, because everything you see on screen reflects our own human propensities, some of which we would not like to acknowledge. Every human quirk, both blessed and flawed are well documented here, the good, the bad, the ugly, and the sublime. This not only makes Delhi-6 a great piece of cinema, but also one of the truest accounts that you are likely to see of the lives, concerns, and goings-on of the majority of India.

As a director, Mehra’s work has gone from strength to strength. While I haven’t seen Aks in its entirety, the jump in the quality of film-making craft was very apparent between that and Rang De Basanti. The leap to Delhi-6 is a less apparent one, but more significant. Technically as beautiful and more so than the previous film, Delhi-6 achieves that which very few writers and creators achieve, the point where the work seems so “right” that any overt style of the creator disappears, and only the story remains. This makes Delhi-6 a very intimate and involving film, and I would love to see where this director goes from here, because it is bound to be engaging. 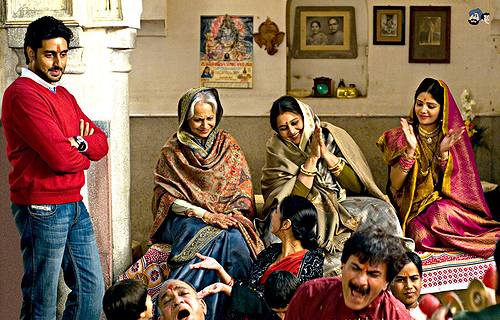 In the cinematography department, Delhi-6 is Binod Pradhan‘s best work. And the contribution to the photography in this film cannot be discounted. What we see on screen is exquisite but not glamorous. While Pradhan has an impressive body of work behind him, here for the first time he has accomplished something that neither he nor anyone else in my recollection has done so convincingly, he has made the streets of India look the way they do when I walk down them. This result is a lot more elusive than you might think, and is the visual potion that makes this piece absorbing and involving for the audience.

The acting performances in this film are excellent all around. Abhishek Bachchan is an actor I admired a lot when he came into his own in such greats as Yuva, Bunty Aur Babbli, and the unfortunately ignored Bluffmaster. What followed were a string of much-shouted-about but ultimately academic performances, which were a sad shadow of the past. I’m happy to say in Delhi-6 I once again saw the Abhishek Bachchan of old. He plays Roshan with an easy innocence that few others can pull off, and I hope this means I shall see many more such performances from this talented actor.

While the character of Roshan is the viewer’s window into the world of the movie, the story is dependent on the ensemble that surrounds him. Everyone shines here, and seems like they were picked off a side alley in Chandni Chowk to essay their roles, even though they are all familiar faces. Waheeda Rehman and Rishi Kapoor add the class to this milieu, showing their maturity in buckets. This is one of Rishi Kapoor’s best performances, doing with subtlety what he did so well with near-pantomime in the recent Luck By Chance, creating a distinct and believable character.

The “bit” players have a lot of bits to carry here. Vijay Raaz brings his usual street-wise sensibility to his role as the local police officer. K.K. Raina and Prem Chopra play the pillars of the local society with ease and experience. Atul Kulkarni is refreshing as the slightly slow Gobar. Om Puri and Pavan Malhotra are perfect as feuding brothers who still need to deal with each other on a daily basis, and their families consisting of Sheeba Chaddha, Aditi Rao, and Supriya Pathak do a remarkable job of playing women caught in a no-win situation. Cyrus Sahukar plays the fly-by-night photographer with just the right amount of sleaze.

Amongst the supporting cast I think a few deserve special praise. Deepak Dobriyal plays the pivotal character of the local shopkeeper, Mamdu, with passion and humanity. Without him the story would not work as well. The same should be said for Divya Dutta playing the fiesty garbage collector, Jalebi. I have seen her in many roles before and while she always does a good job, I think she has surpassed herself here. This time I can’t imagine anyone else in that role and certainly no one else doing it better. Last but not the least, I couldn’t track down the names of the two child actors in this film who played the two young boys from the feuding families. My congratulations to them and the director for creating what might be the most realistic sounding Indian children in film history. 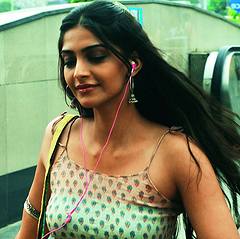 I have reserved a special place in this write up for Sonam Kapoor. She is the de-facto female lead of this film, if you need to narrow this broad canvas down to the concept of leads. She is a key catalyst in the plot, while also being an entire subsection of the plot herself. This is her second film after Saawariyaa, which I have not seen. I think she is very impressive, but not in the way you would expect. The regular role of the female lead in Hindi cinema has always been to be glamorous and unattainable. As Bittu, Sonam Kapoor manages to be un-glamorous and down-to-earth, while maintaining a simple charm and a beauty. You know, like a real person. She mouths no dramatic dialogue, she isn’t the most voluptuous thing you’ve ever laid your eyes on, she doesn’t watch how she looks and talks at every moment, she looks like any number of normal Indian girls I or anyone else has know in their lives. That is something I haven’t seen done so well before. I hope she goes on to use this as a strength rather than see it as a weakness, because having seen this performance I will gladly see the next Sonam Kapoor movie to be impressed again.

Another slight surprise for me here was the music by A.R. Rehman. He’s a huge talent, he’s just won two Oscars, and he’s obviously in a league of his own. But, I think talents such as his should only be measured against themselves and his recent work has not impressed me. It’s all been perfectly good and maybe even great work in general, but it was all sub-par A.R. Rehman work. I am happy to report that in Delhi-6 he is once again impressive. The soundtrack is a beautiful mix of old and new with everything from traditional folk melodies to more urban electronica. It’s all good but of special note are the title theme, Masakalli, and the very endearing Genda Phool. All excellent tracks which I will be listening to forever, and all tracks which add immensely to the experience of this film. Good film music must be both good and an integral piece of the experience, and this music is both.

Delhi-6 is a beautiful movie and one that follows in a long tradition of storytelling in parables. I think it has gotten a lot of less-than-glowing reviews because many reviewers simply didn’t have anything to put into that section of their write-ups which they reserve for exposing which English movies they think this film was shamelessly plagiarised from. In many cases it is true, but in many it is just their imagination and a looming deadline. It’s impossible to point fingers at this film in that regard because it is so unlike anything else you have seen. And that’s a good thing. Delhi-6 manages to unearth feelings within you which you had either forgotten you had, or which you had prayed you didn’t have. Having thus laid bare your human frailties to yourself, it begs you to question your own contribution to the chaos of the world. To put the viewer under such scrutiny while also making an entertaining and engaging film makes this a brilliant achievement, even if what you see isn’t always comfortable.

As a complete piece, Delhi-6 is life affirming rather than depressing. It forces you to accept humanity’s shortcomings while also celebrating our greatness. It seems to reassure us that our positive qualities can far outweigh our stupidities if only we accept it all with open arms, and think a little. This film is a lot about open arms. It is about embracing the human emotion, human prejudices, life’s inconsistencies, and India’s chaos; In all these lies a deeper happiness just waiting to be found. The best I can say about Delhi-6 in Hindi is “dil se banaya hai“, it is made from the heart. If you can see it in a similar light rather than only through the lens of your pesky intellect, you’re in for a ravishing revelation. I highly recommend you try. 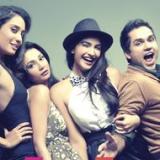