Though her reputation preceded her, I had never read a book by Ursula K. Leguin before this one. I’ve always been a fan of the old-guard of science fiction and fantasy writers, of whom she is a much revered member, so when I spotted this book for a bargain and the synopsis seemed thoughtful and […] 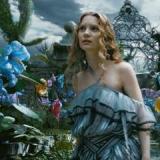 Tim Burton’s Alice in Wonderland is a brash, old-fashioned fantasy adventure, with a subtle heart. Having chosen to take the original adventures of Alice forward into new territory, Burton has preserved the essence of a classic while also creating fresh facets for a wider audience to enjoy.

10,000 BRAVE NEW WORLDS One million years have passed since ancient man first launched his frail metal crafts into the great darkness named “outer space”. Now distant galactic clusters are home to the myriad descendants of the inhabitants of Earth. Now, each world, light years separate from the others, forms part of an island universe […]

Once upon a time, at the height of the Soviet era, Russia and India were good friends. And not just the kind of casual acquaintances who exchange pleasantries across high-level conference tables; We were friendly enough that the two peoples were interested in how the other lived and thought and dreamed. During this era of […]

I submitted an image for last weeks Weekend Challenge over at Elysiun. I was thinking of putting it up on this blog when I realised that I have not recorded my previous two etries into the WC either. So here, for my own reference more than anything else, is a list of my last three […]

Woah! Nearly two months of silence on this blog. Didn’t realize it as I was busy sharpening my 3D claws. I am currently working on the Blender F1 Challenge 2004. The image attached was not to my total satisfaction but I submited it to meet the May 7th deadline. Now there is an extension till […]

My new site should have more of my work, better work, and also more varied work. Illustration is one of my main areas of interest, and something I want to diversify into after doing a lot of hardcore graphic design for many years. 2003 presented me with many opportunities to hone my illustration skills including […]