10,000 BRAVE NEW WORLDS
One million years have passed since ancient man first launched his frail metal crafts into the great darkness named “outer space”. Now distant galactic clusters are home to the myriad descendants of the inhabitants of Earth. Now, each world, light years separate from the others, forms part of an island universe called ‘Starswarm.’ …

Thus begins the blurb on the back cover of Starswarm by Brian Aldiss. It is an old edition of the book which was first printed in January, 1964. Like many others in my collection, I picked it up on the streets of Bombay, off Flora Fountain, in the shadows of the large tropical trees that line the pavement beside the stone walls of Mumbai University. I decided to buy it the moment I laid eyes on the cover and the name of the author, but the cover blurb simply cemented my resolve and set my pulse quickening with that yearning to devour that only a hardened bibliophile will relate to. And so on that sunny afternoon, which is when I end up doing most of my book buying in Bombay, the money was paid, the old book was placed into a cloth shoulder bag along with our other finds for the day, and we caught a bus that would take us homeward.

The other little fact that every other hardened bibliophile reading this will relate to, is that I didn’t quite get around to reading this newly found gem immediately. It was only a few months later, far from Bombay in the chaotic comfort of my room that I finally picked up Starswarm again. Once more I admired the beautiful typography on the cover, I let the cover blurb wash over me, and I was hooked anew.

Starswarm by Brian Aldiss is a collection of science fiction short stories masquerading as a small novel. At that subterfuge, it succeeds very well. The book is divided into chapters of sorts, each of which gives a glimpse into a new alien world and the people that have come to live there over the eons since their ancestors from Earth moved into the stars. Each is a slice of life that celebrates the humanity and the inhumanity of a unique culture and situation, to give you a news-reel snippet of many lives on many planets in a magnificent vision of far future human history. While each chapter is a separate tale that is labeled after the sector of space within Starswarm where the tale is set, the table of contents gives each tale a title, as a nod to the original tales as they were published before they found their way into this collection.

Sector Vermilion – A Kind of Artistry

We start our tour of Starswarm in the deep end through a tale that takes us to three very different planets. The bleak ocean-covered planet of Endehabven is the home of our protagonist, but we are also introduced to the fiery wastes of Festi XV, and the hustle and bustle of Pyrylyn. Like all the other stories in this book, however, it isn’t about the landscapes and the worlds, as beautiful and startling as they are, but rather about the people. This tale too is ultimately about the people of Endehabven and the strange social structure they have built out of necessity. It is a story about our space-faring protagonist and his relationship with his mate.

We then move to the war torn planet of Drallab where one soldier dreams a dream. A dream of war. It is a quick paced tale set in a rigid world of unending violence, perpetual military scheming, and the ultimate machines of this eternal war, drug enhanced men. What would you dream of if you knew nothing else?

In Sector Violet we find an immigrant tale on an interplanetary scale. Hopeful people in less fortunate places are always looking to move to better circumstances. Such is the human way, and this is the story of one such couple who have taken the plunge to move to the much celebrated planet of Dansson. Now finding themselves there, they get two know their new home, its wonders, and its open secrets. A cautionary tale, or perhaps a realistic one.

Sector Diamond – The Game of God

Next we find ourselves on the primitive world of Kakakakaxo with a human population of one. A man who crashed on to the planet in his youth now lives the life of a hermit in these strange surroundings, worshiped as a God by the ferocious and primitive reptilian creatures that are native there. A team of surveyors arrive to judge the suitability of this un-touched world for colonization, and new truths about life there begin to emerge. This is a nice old fashioned action-adventure science-fiction tale. One that challenges our human frailties and our human perceptions.

On Banya Ban we find our strangest tale that seems to not be a story through most of its length. We are presented with the sometimes mindless wanderings of a creature that is slowly discovering awareness, or perhaps losing it. We are carried along on this roller coaster of mental discovery and rambling in this very strange piece of writing. The fact that Brian Aldiss pulls it off with so much ease is a testament to his craft.

And from that senselessness we move swiftly into comic madness on the planet Glumpalt in the nebula of Smith’s Burst. Here for the first time we are presented with truly alien lifeforms rather than human descendants, seen through the eyes of one human who finds himself unwittingly trapped on a strange world populated by stranger alien creatures. It is a rousing tale of adventure and drama, with the spirit of old human myths and possibly with the same amount of fact in its reporting.

Sector Azure – The Moon of My Delight

Tandy Two is an entire moon that has been retrofitted to act as a large interplanetary braking system for faster than light ships. This is a an excellent and very gripping frontier tale about the people of Tandy Two, their work, their lives and their loves.

The Rift – One Hundredth

And finally we end up on the ancient and forgotten Earth where human kind as we know it has not walked for eons. But we have left successors of a kind, and the final fate of humanity is said to not simply have been one of migration, but one of a shift of state. This and many other things we are educated in in this beautiful tale of spirit and humanity in all the most unexpected ways. And thus we leave Starswarm where it all began. 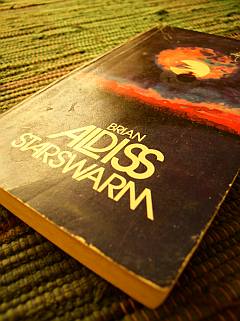 You can probably guess from my descriptions above that I absolutely adored this book. I went into it with an open mind and I was handsomely rewarded for my patience. All the tales were new to me, except one. Once I started reading the last tale set in “The Rift” I knew that it seemed familiar and by the time I turned the last page I realised that I had read it before and loved it in another collection of shorts I had read in the past. It was a tale I had cherished at the original reading and now I am happy that I can delve into it whenever my heart pleases. It had a strange poetry to it that the one tale set on Earth I had some forgotten memories about, and it made the ending of this book all the more bitter sweet.

Starswarm by Brian Aldiss is an exquisite piece of work. Not only are the individual tales of a quality and consistency of imagination you will rarely see in today’s science fiction, but the frame tale set up though this collection adds a whole different level of cohesion and grandeur to the proceedings. You are introduced to each tale through the introduction to each sector of this vast human expanse in a sort of documentary travelogue, and like all the best science fiction it provides your mind with enough stray pieces for it to construct an intricate and endless fictional reality around. Starswarm doesn’t leave you wanting, but its subtle and human stories, and its sometimes clever, sometimes bleak, and sometimes heart-warming tales of the future of the human race leave you yearning for tomorrow and dreaming of other worlds.