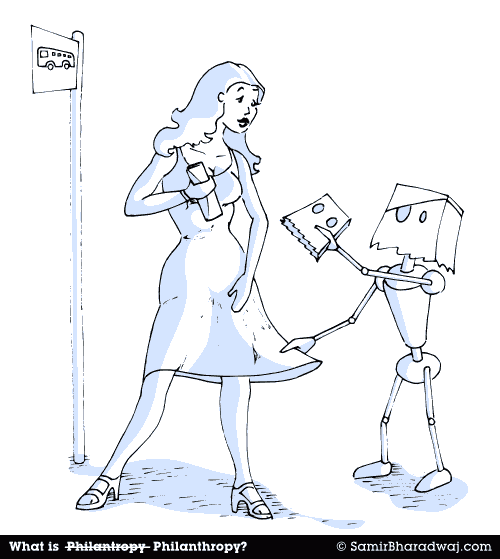 Vishal recently announced the second Comic Konga. Five days of original comic content to be put up here seemed as good an excuse as any to get me cracking on some new material. So here goes with my first try called What is Philantropy Philanthropy. Like last time, I’m starting a day late, and it remains to be seen whether I will stick to the schedule, but I do hope to get further than before (only managaed 2).

Day 1: I really need to be drawing more often, rather than on such rare occasions, which lead me to try to come up with a recognizable character I could use for my illustrative endeavours. He doesn’t have a name yet (and not quite sure he should), but the little robot with the paper bag on his head has potential.

The original pencil sketch was traced with a black finetip pen. The inks were scanned and vectorised in Inkscape before applying the blue tones and text.

I would very much like to explore this character further. I think he could prove to be a useful asset when I need to express a one-off idea or opinion but don’t want to elaborate too much. Let the testing continue.

Hope you enjoy this slightly esoteric (philanthropic) first in what I would like to make a more regular performance in the future. 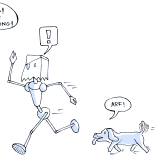 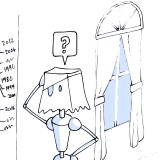 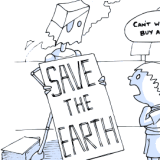