After my Sunday visit to the Mahim Nature Park, during my recent trip to Bombay, I spent a week doing a lot of hopping around through the city. My transport of choice is usually a public bus, and that week I was on buses a lot. Most of the time, I had my camera with me and took pictures.

Taking photos from a bus is a great way to get images of street life in a city. It has it’s advantages, you can concentrate on the photos rather than the traffic, and you’re bound to travel through many parts of town you might not usually visit. But, photography from a bus has many challenges too, not the least of which is the near-constant motion.

What follows is a collection of photos I took on the streets in and around Mumbai city, while riding every conceivable kind of bus available. Looking back at so many pictures taken from a bus over a fairly short stretch of time (6 days), I realised that there are tricks I’ve picked up along the way that allow me to take some decent shots from the runaway chariot that public road transport often is. Here are some of those tricks.

1. When the going gets slow, the photographer gets clicking 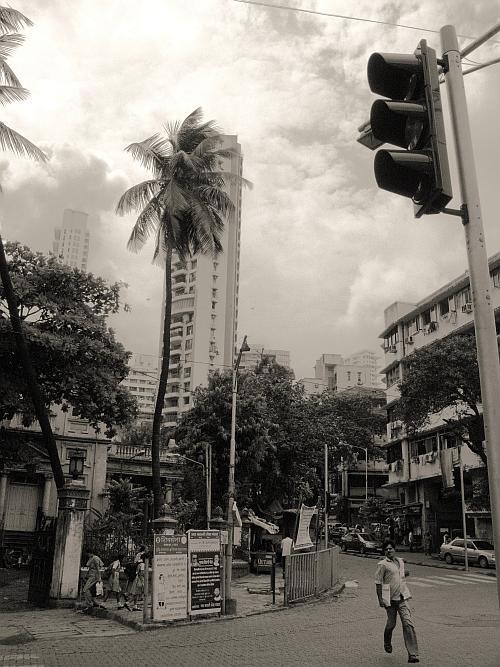 The bad news is, buses move a lot. They throw you from side to side, they bump around all over the place, you wonder how anyone could stay in their seat on some routes, let alone take clear pictures. The good news is, buses also slow down and stop a lot, at bus-stops, at traffic lights, at busy intersections, all places with plenty going on for you to photograph. A picture like the one above, of the man running across the road at an intersection would be impossible to get when the bus is barrelling down a road at full clip. But, wait, watch, click, and much is possible. 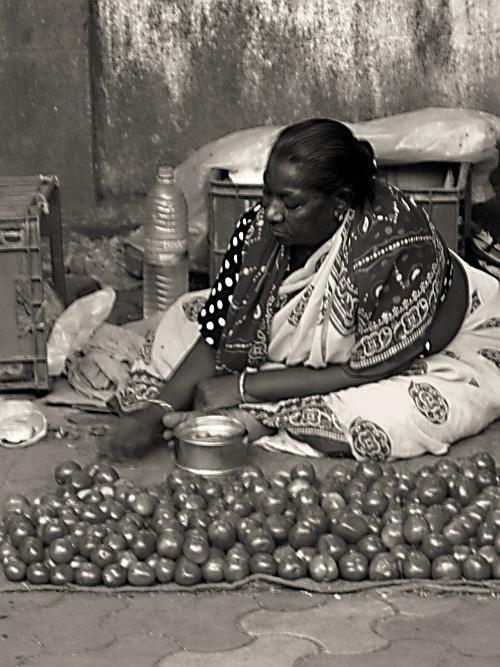 The starting and stopping of a bus has its own rhythm, and if you’re really interested in getting some good shots from a bus, you’ll learn to read that rhythm and be prepared for the next convenient stop. That anticipation is essential if you want to take any properly framed shots. I had a pretty good idea the bus would slow down somewhere near this woman selling tomatoes on the street, which is why I was able to get this zoomed in shot without much blurring. 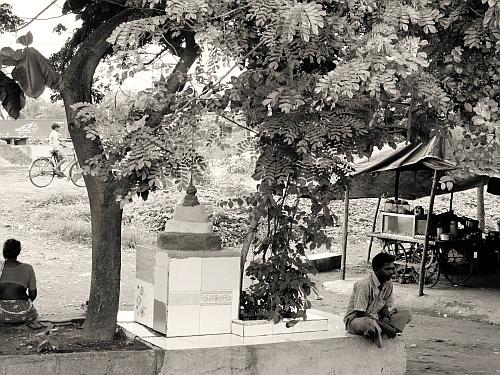 The other trick to anticipating slow downs is to look ahead. How much you can see is limited, obviously, there are things blocking your view down the road, but sometimes you can spot an interesting subject a few seconds before you’re next to it and that can be enough to get the picture you want. 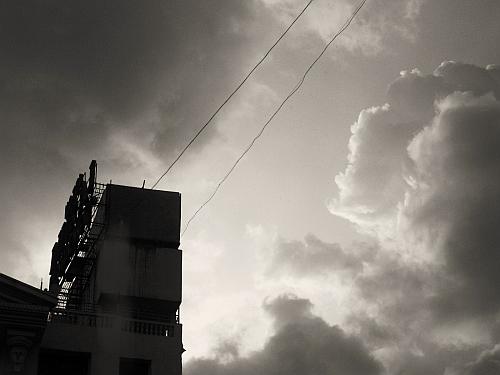 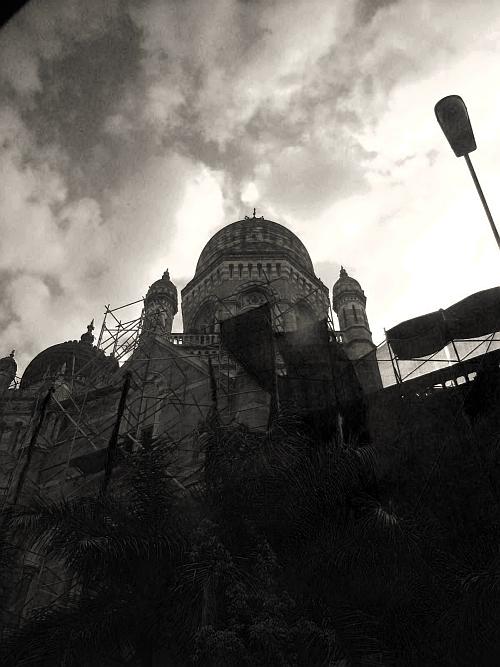 The problem with taking photographs of the top of structures while standing on the street is one of angles. Stand next to a building and you’re staring up the nostrils of a giant, all you can see are air conditioners and pipes. Stand across the street, and you often get a boring distant angle, or an interesting angle constantly marred by passing traffic. Ideally, you’d love to stand in the middle of the road and take your precious picture from the perfect dramatic angle, but taking photographs while standing in oncoming traffic is not something I recommend, for health reasons. The above photo of the municipal headquarters in Mumbai was taken from one of the busiest intersections in the city. Thankfully, a bus can stand in the way of traffic all it wants without any chances of you being run over. 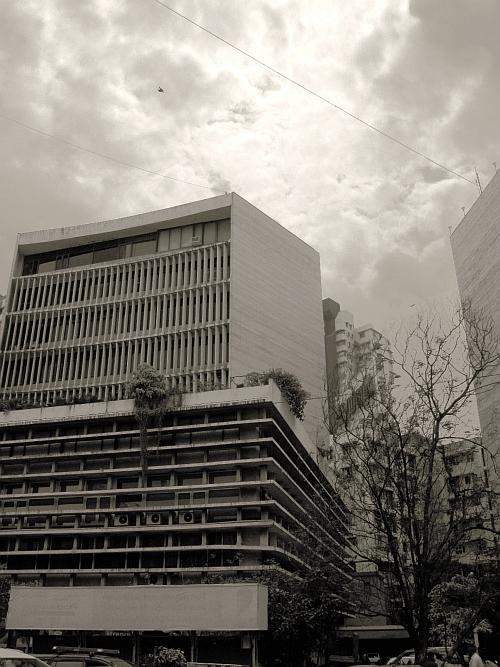 While snapping pictures from a bus, it’s tempting to concentrate on all the action on the street, the people, the signs, life, but on occasion, I suggest you pay attention to the world above. The road can offer some startling views of a building, and the bus is high enough to give you a clear shot above the other swarming traffic. Use it. 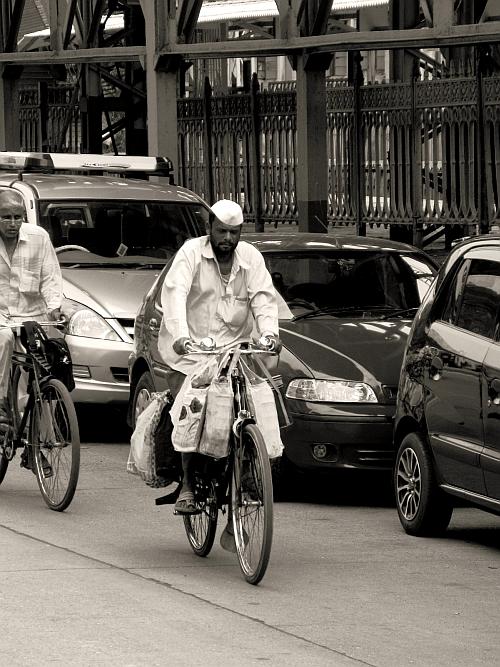 Another obvious subject often missed by street photographers is the traffic on the street itself. Being in that traffic in a bus, can offer you some very interesting views. We like to think of the commute as down time, when people switch off as they travel from A to B, but people do a lot on the road, and the road has much to offer the adventurous photographer riding a bus. 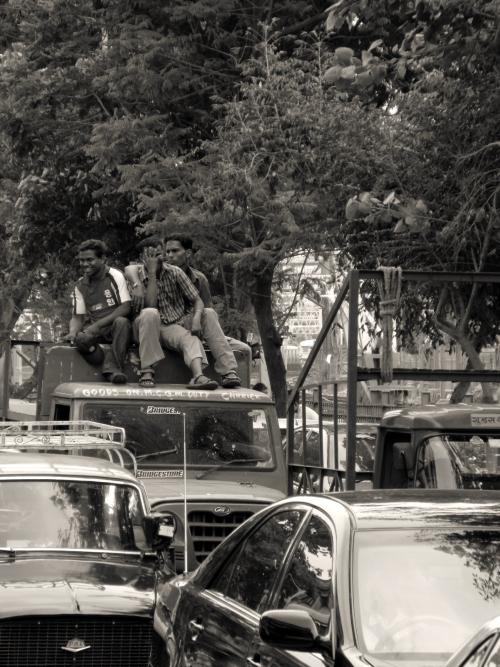 One positive of taking pictures of other vehicles on the road is that you can often manage to do it even while in motion. Since you are both moving, usually at similar speeds, the dangers of blurring are fewer. Add to that the possibility of wonderful motion-blurred backgrounds, and you have the makings of some very striking images. 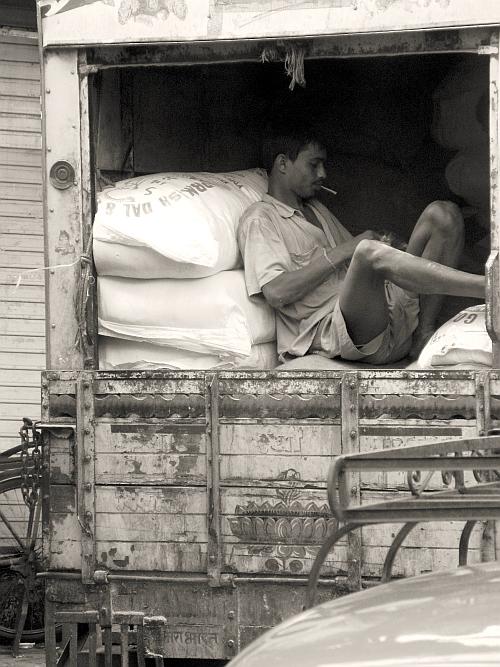 If you’re taking photographs from a bus, a traffic jam is your friend. Sure, jams can be boring and frustrating and uncomfortable, but all those people not going anywhere in a hurry can provide good fodder for photos. For one, they’re standing still for you, and more importantly they’re likely taking a moment to relax while they don’t have to worry about the traffic and a moving vehicle. An ideal combination.

4. The dazzle is in the detail 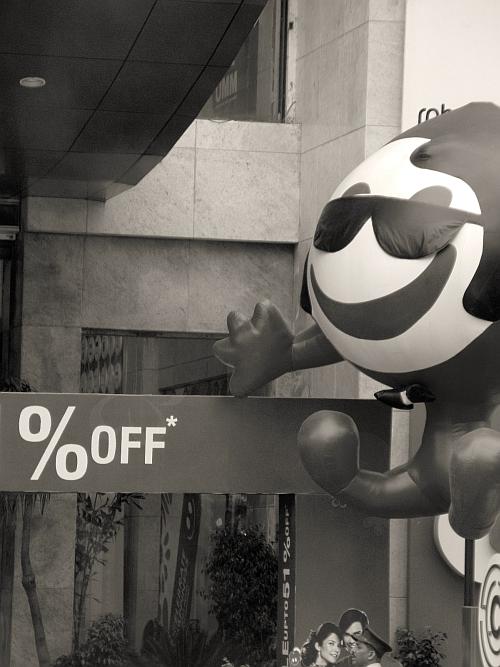 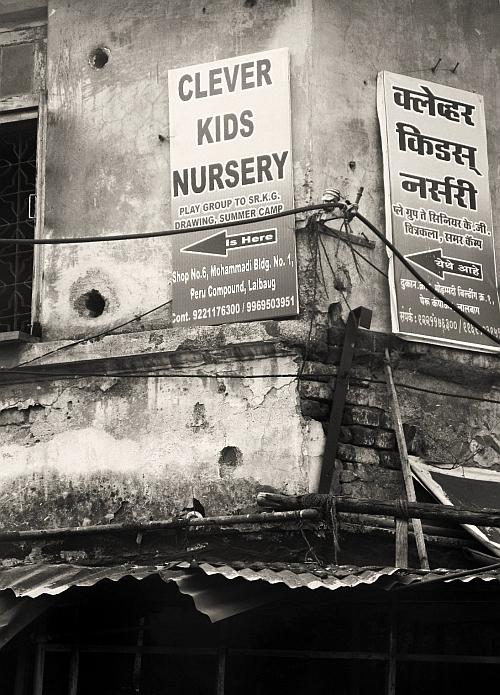 Streets are the arteries of any busy city. Thousands, tens of thousands, maybe millions of people pass through these streets everyday. This fact isn’t lost on the people trying to sell things, and you will find a cacophony of signs, billboards and posters screaming for the attention of the passer-by, luring them to partake in whatever product or service is on offer. Sometimes these can be profound, sometimes they can be funny, and sometimes the can be the centre piece of a beautiful scene. Whatever they are, watch out for them, because signs are as much a part of streets as any thing else, and your seat on a bus gives you a front and centre view. 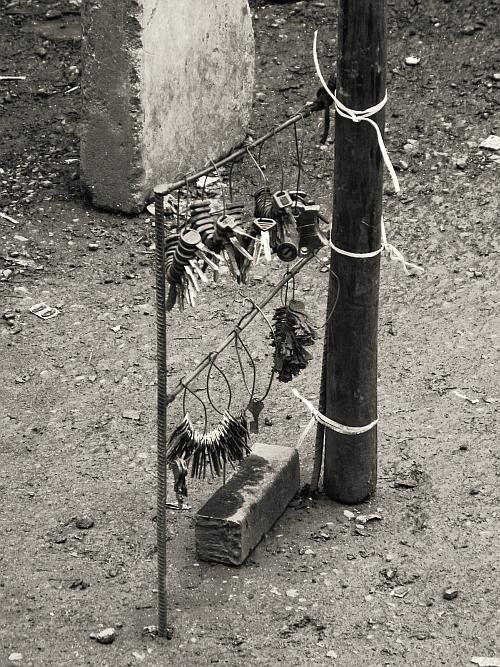 Other things aren’t announced or advertised, but they live on the street. Tiny details that would go unnoticed unless you were looking for them. A key maker with his collection of blanks, found on many street corners in Bombay, but you probably don’t notice unless you locked yourself out of your home and need his services. From a bus you can notice, just as long as you’re paying attention. 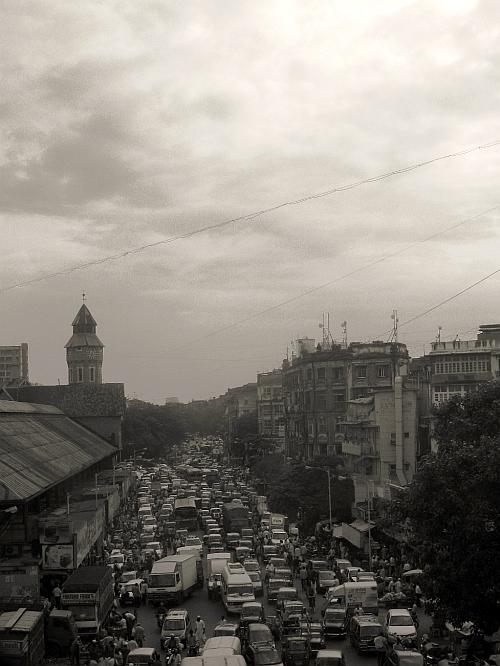 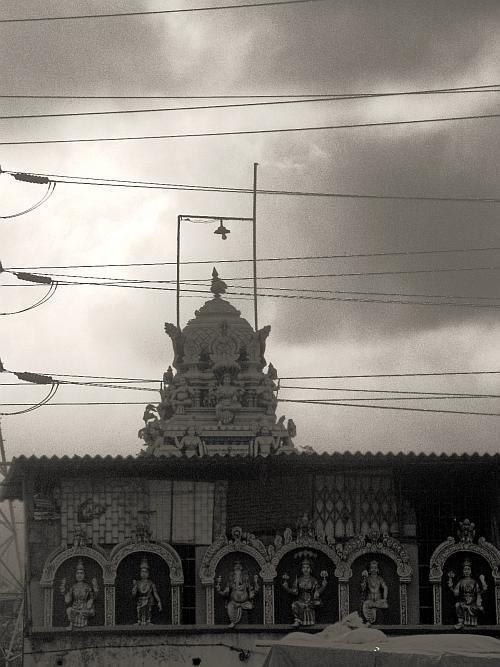 Fly-overs, bridges, and raised highways are a part of most cities, a natural extension of the growing traffic and the large commuting population. They ease the congestion of those great rivers of automobiles surging through the streets, and if you happen to be in a bus going over one of these, they also provide you some spectacular views forbidden to pedestrian eyes. The eye-level photo above, of the top of a small temple in the Mumbai suburbs would not be possible without it. 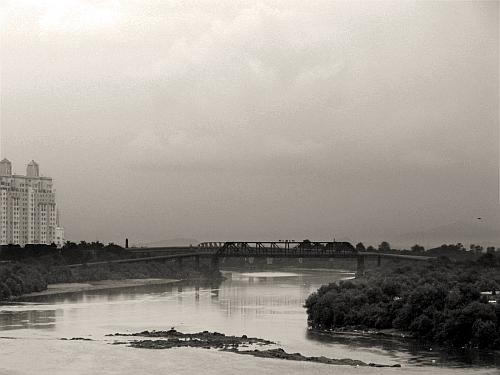 Bridges are a classic. There’s a reason they have been the subject of so much art even before photography. For one, they are a romantic structure, not built by humans to live in, or for protection, or for worship, but simply to travel, to join. Bridges take us where no one could have gone before, and likewise they gift us visions no one could have seen before. If you’re on a bus and lucky enough to be driving down a bridge, don’t waste the opportunity to capture the horizon.

6. All the street is a stage 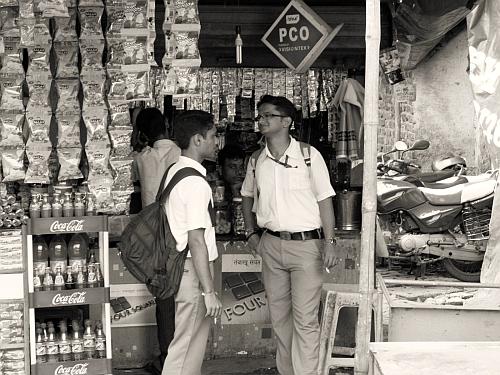 The streets are always flowing, with people, with traffic, with activity. But, the most interesting scenes often occur on the sidelines, away from the flow, just at the edge of the current where the eddies lap lazily at the bank and travellers rest for a moment to watch the world go by. You can’t spot these scenes from the pavement, because you are too close and you lack perspective, but from a bus they come alive as the players take their positions. 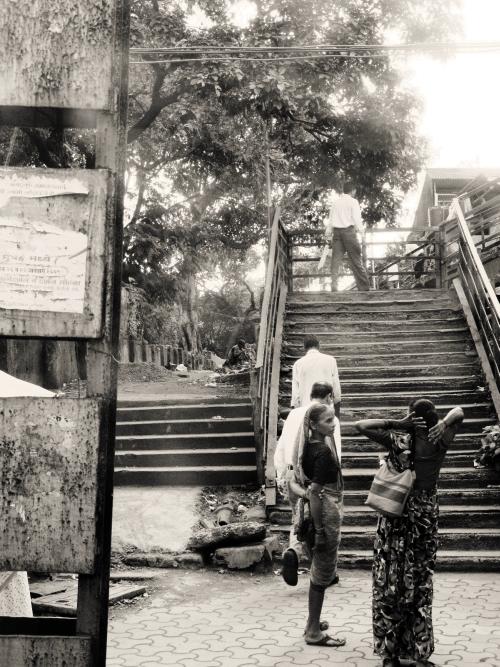 People are the evergreen subject of street photography, for how long could you go only taking snapshots of deserted streets? People let their guards down as they stand, walk or converse with friends, acquaintances or complete strangers on a street. Watch out for these opportunities and scenes from your vantage point on the bus, and use them well. 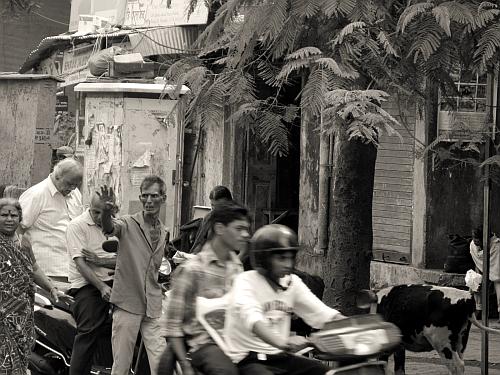 Beyond the obvious pictures of an interesting pair of people or some human story unfolding on the side of the street, don’t ignore the chaos. The bus affords you a view of various layers of people walking, standing or going about their business, and sometimes a random snapshot of these whirlpools of activity can produce exquisite results. There is nothing like a shot of people connecting on the street, but there is even less that provides the visceral human visuals of complete strangers passing each other on a road. It highlights how similar we are, and how different, and it makes for great photographs.

A bus is a very useful thing. I’ve always preferred them over trains, because trains are purely A-to-B. Buses on the other hand, take you on adventures through strange streets, unknown localities, and many lives. There’s no better way to really get to know a city than on foot, but buses come a very close second, and they take you places you would not have thought to go. Street photography is a challenging art, but try taking some street photos while in the flow of traffic on a bus and you will come up with some gems that would have been impossible to get without the journeying. 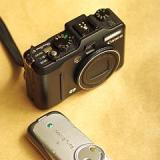