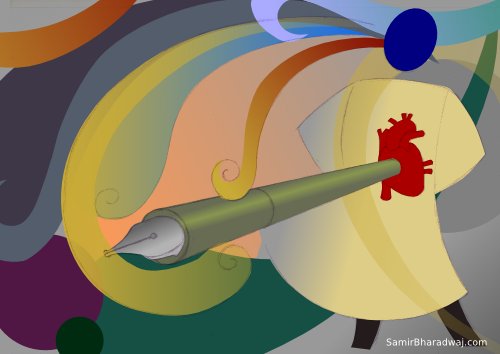 Of all the much touted maxims of modern society and intellectual thought, things like separation of church and state, equality and equal opportunity for all and the like, the one I think is the most artificial construct is detached, unbiased and impersonal reporting. There is a prevailing falsehood about the effect of personal bias on the story that a reporter tells and how it affects the perception of ‘the truth’ by the reader. The falsehood is not in believing this bias exists and changes things, but in that it may actually be a perfectly avoidable evil.

I just finished reading Dreaming in Code, and what stays with me after Scott Rosenberg‘s comprehensive and appropriately fragmented tale of the early years of the Chandler open source project, is not primarily the insights gleaned about the process of programming software, although those were numerous enough even for a closet coding enthusiast like me, but rather the impressions that remain from his last concluding chapter with his more personal take on his involvement with the project and its originator Mitch Kapor. Stray bits and impressions from a quick scanning of his end notes, and the human dynamic of 3-years on a project like this, which emerges from his acknowledgements, is what will stick until my next reading.

Detachment is a fine theory, but what does it most often yield? Dry, uninteresting, unengaging, indecisive waste, for the most part, which forms the daily news. There’s a reason I don’t read the news, because as we step into a world of instant feedback, always-on telecommunication and global sharing of information, you come to realise that ‘the facts’ are in fact not all they are cracked up to be. I never read the news, on paper or on screen, so you can save your breath about my personally contributing to the downfall of fat publishing empires by not buying a ‘real’ newspaper. In spite of my disinterest in the news of the world, however, I am somehow constantly aware of the facts of the world, more than I would like on most days. For example, I can’t help but see a few headlines on the Yahoo! home page every time I log-out of my often neglected email address. Even less avoidable is the exposure to the essentials of what has people huffing and puffing in short 140-character bursts on Twitter. And this, mind you, is after following less than 50 active tweeters, none of whom are closely related to traditional news media. ‘The Facts’ are much simpler and cheaper than you think.

There are, of course, the ever fascinating gory details of how many dead, and how exactly people died, and what new suffering I should be fearing for myself based on what’s happening in the world, but those are drugs I’ve never been interested in smoking. I find my thoughts, as cutting and disturbingly cynical as they can be, to be infinitely more interesting and educational than any amount of surrogate suffering dished out on a daily basis by objective reporting and devoured by most. So I decline to partake.

As soon as there is a reporting of events, even facts, there is a subjectivity to them. Subjectivity, the bias of the observer, is a simple fact of existence that even science has a growing realisation of, so it seems pompous and entirely self-serving for news and non-fiction writing to maintain some religious sense of objectivity. There is no real balance, or covering every side, or seeing both viewpoints, when we gladly ignore the viewpoint that’s clearly counter to any social norm or against the current mode of politically correct thinking. News and objectivity in reporting is a myth and it is about time we realised this. Perhaps the slow decline of print media and traditional news channels is in part an unconscious realisation of this fact, brought on by that great leveller of ‘balanced’ opinion, the internet. The internet, as an amorphous entity, is ever ready to go off on clearly inhuman tangents if those tangents are popular enough, or to challenge nonsense if it isn’t popular enough to ignore. The reality of balanced reporting, and the fantasy of everyone having their say, is closer to utter chaos than utopia.

Why then chase this outdated dream, when the invested reporter or writer, one who accepts their role in the process of observation, interpretation, and representation in relatable stories, is so much more affecting and informing? Why must the events and stories of the world be read in long pages of pretend facts when those could be read and gleaned in bullet-points, and when a personal story about the broader sweep of events, developments and people, even if it attempts to stick to the ideals of objectivity, can be so much more informing, involving, eye-opening, insightful, and most importantly, more human?

As human beings, we read for an insight into what another human being thinks and feels, and what they glean from their interactions or observations of other human beings. This is the fundamental human activity, the one thing that takes us beyond the level of instinctive beast, this sharing of memories and stories of self-analysis. Stories are human, the ones that are born in the human imagination, and those that merely pass through the imagination between the observing senses and the storehouse of experience. The human imagination is an essential aspect of our humanity and also the way we perceive and understand the world. Yet as a society, we have chosen to ignore this equal power at our table, and we’ve banished it to the position of unacknowledged bastard or entertaining buffoon, the black sheep of the family we must all be ashamed of. It has gotten to the point where we even refuse to acknowledge that the imagination is the only one at the table that reads and describes a picture of our world to the rest of our being, the virtually blind masses of our intellect. ‘Stop dreaming’ is the commonly spit out warning of the vengeful adult as the unfettered child is slapped out of listening to their imagination, their storyteller, and another bastard is born.

We lose ourselves in fiction and fantasy, because in that realm the human spirit is sanctioned in its biases, its emotional investments, its unbalanced interpretations, its unobjective reporting of the facts. But in the things through which we learn of and understand the world, the stories and non-fiction accounts through which we explore our real world passions, learn our crafts, form our personalities and absorb our opinions, we choose to banish all those parts of our minds that make us who we are. We see emotion as a guilty pleasure, tucked between the lines and secretly sniggered at in mental back-alleys like a dirty thing, all the time self-righteously proclaiming a perfect objectivity that cannot exist. We live a lie, when what we should be doing is embracing the filter of our existence and demanding that our tellers of facts and stories be human rather than feign inhumanity, while remembering that there is no perfection in the given truths.

As writers, we must strive above all else to be human, tell the story of human affairs honestly, and with all the emotions, pains, biases and joys which our humanity grants us the ability to see and to share. To not do so would be dishonest and hypocritical. To imagine that doing so is a completely avoidable evil would be delusional and dangerous.