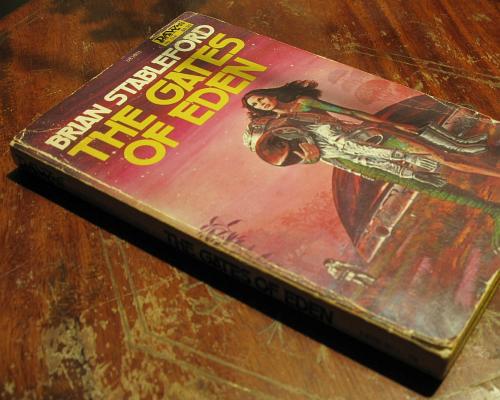 Like much of my fiction reading, The Gates of Eden (1983) by Brian Stableford was picked up in a bargain bin, where all the strangest treasures are to be discovered, this one in a second-hand book store. The cover art by Doughlas Chaffee showed an auburn-haired beauty standing handsomely holding a spacesuit in an alien landscape. I love the traditional science fiction paintings of the time, so I had to see what this was about.

Before the hyper-space vessels could go from planet to planet, stations had to be set up. And that meant manned spaceships cut off from Earth for decades.

The explorer vessel Ariadne had gone toward galactic centre and was considered lost–until its call was heard appealing for a xenobiologist.
…

And the blurb continued on the back cover, but I was already hooked and wanted to know more. So I picked up the book.

Lee Caretta is the xenobiologist who narrates his tale. The book drops us straight into one of his nightmares, which we learn he suffers from on occasion, along with blackouts. All this is unknown to his space-faring colleagues and is nearly forgotten as he gets a call to visit the vessel Araidne which currently orbits a strange habitable swamp planet dubbed Naxos. The entire initial survey team has died suddenly and mysteriously, and Caretta, along with a few other experts, is called in to find out how it happened. They must determine if the planet is safe enough for further exploration and possible colonization, which was the Ariadne’s original mission in heading off into the unknown.

The author, Brian Stableford, is a scientist. It shows through in the thoughts and words of the characters in The Gates of Eden. Thankfully, he is also a very fine writer of fiction and the short book makes for gripping reading with much to admire in the crafting of the phrase and the succinctness of the words. The book plays out like a very tight procedural, a science fiction murder mystery of sorts, with the usual assortment of shady characters and unknown motivations, but mixed liberally with a whole lot of biological discussion and hard-core science-fiction musings. The reality this story creates is an intriguing one, because on one hand humanity has found other habitable words and intelligent alien species and faster-than-light travel, and on the other hand, Earth has undergone no revolutionary changes and remains very much as we can experience it now, stagnant for centuries. It’s a premise that is dramatic in its mundanity.

I enjoyed The Gates of Eden, not just because it is very well written in a technical sense and engaging, but because it took me back to a childhood of reading Asimov and those more straight-forward and clean science fiction stories of old. It is from a school of science fiction written by a particular type of geeky writer, perhaps for a particular type of geeky reader. The story is, at its core, an episode of Star Trek. A ship arrives in orbit around a planet, there is a mystery to solve, teams go down to the surface and intrigue and adventure follows. This is procedural science-fiction at its best, and it even abides by many archetypal elements from those old stories I grew up reading; There is the mildly ineffectual male protagonist, a female sidekick who is his superior in many ways, the both practical and philosophical discussions about science and humanity, and in the end, the real problems are solved by people putting their heads together and figuring things out with words and discussion rather than just incendiary devices and bravado.

There are complaints that can be made about The Gates of Eden, mostly to do with the fact that it might feel too short, and in its brevity, many of its plot choices and character motivations come out feeling clichéd. However, I do wonder whether those choices would have seemed tired back in 1983, before all of us had been exposed to thousands of hours of rehashed television plots and a multitude of pulp fiction in every conceivable medium.

While this is by no means a masterpiece of fictional storytelling, I can say unequivocally that it is gripping, it kept me entertained throughout the reading, and I know I will read it again given a spare day with some time to kill in cerebral relaxation. That can’t be said for a lot of fiction, and I don’t think there can be a better testament to the qualities of a story.

The Gates of Eden is a wonderful little nugget of science fiction which is over a little sooner than you would like it to be. But within that time, it creates in your mind a comprehensive universe, alien and yet not too far removed from our own, characters who are utterly relatable even within their archetypes, and a story that keeps you entertained, occupied, and imagining. Such stories are always a pleasure to live.