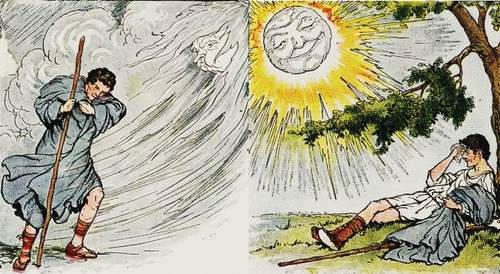 I didn’t read any baby books when I was growing up, by that I mean books specifically written for infants and pre-schoolers. I got thrown straight into the deep end with fairly serious comics, books of folk tales, and some other strange things that most wouldn’t consider appropriate childhood reading. It was only natural after growing up listening to stories from Indian mythology and fables from around the world, lovingly narrated by my parents and grand parents. These stories weren’t protective, or clean, or politically correct, instead they were raw and brutal and beautifully human. It was a time when He-Man cartoons were being shown on TV and the idea of moral stories for children that didn’t all involve cute teddy bears, was considered normal and healthy.

During a recent chat with a friend, our rambling conversation drifted towards the issue of being a parent and the trials of growing up. Our discussion reminded me of an old story I had read somewhere, and I shared it with her in short bursts of instant messaging nuggets. She loved the story, so much so that she later went and shared it with her 8 year old son. When he reacted with similar enthusiasm, she asked me to send her a version for her to keep, and this is what I wrote:

The Sun and The Wind

Once upon a time, the Sun and the Wind got into an argument about who was the greater force of nature. The Wind was very proud of his unstoppable strength, so he challenged the Sun to a test.

Looking down at the world, they saw an old man walking down a village road wearing a coat. So, they decided that whoever can get the coat off the man would win, and be declared the strongest.

The wind tried first. He became a great storm, howling and pushing the man around. The sound was deafening, and the wind was freezing cold. But the old man had survived many storms in his years, so he just wrapped his coat around himself even tighter and continued walking against the force of the wind. Eventually, tired from all that effort, the wind gave up. He told the Sun it was impossible, for that man was surely a powerful wizard for having stood against his great powers.

The Sun listened patiently. It was now his turn to try, so he smiled his warm smile down on the old man. Feeling warm in the sunlight, the man took off his coat himself, without a struggle.

It’s usually easier to get someone to do something with kindness and warm smile than it is by force and shouting. And so the wind learnt his lesson.

Not a particularly remarkable parable, although a very succinct and appropriate one for a lot of human behaviour. What I found interesting is the reaction children have to stories like this even today. You would think simple tales of archetypal creatures and symbols, which add meaning to the world around them, would not hold as much of a sway over kids in the age of the internet, computer graphics, and video games, but they do. We adults take well to these tales too, if we let ourselves be taken, but somewhere along the way we get cynical and begin to believe morals and lessons are only for the young and the naive.

Why is it then that the old stories are still told and listened too? Because they mean something, and as much as we like to shun meaning as adults, deep down it is in our human nature to search for pattern and meaning in everything we experience. There isn’t a scarier thought than that all of this, existence itself, means nothing, has no greater purpose.

It is unfortunate that with time morals have gained a bad reputation. So caught up are we an the apparent randomness of the universe, and the immorality of life, that we have begun to shun the very idea of morals, and even of right and wrong. Right and wrong in their most basic sense have become politically incorrect concepts. A dangerous and ultimately fruitless mode of thought, but a natural reaction in a world caught between living by dogma out of habit, but unwilling to accept that it does. Morals and dogma are not the same thing.

As I was writing this, I looked around for illustrations to go with the piece, and found the images that are now at the top of this article. Miraculously they described the story I had remembered. These exquisite pictures were done by Milo Winter for a 1919 edition of The Aesop for Children. I read this story as a metaphor for a point in some forgotten non-fiction book, but it would seem it was one of Aesops Fables all along, originally called The North Wind and The Sun.

I tracked down the originally brief tale, as written in the Greek version, and many details were different from the way I have told it above. But while the specifics were different, the spirit was the same. I had simply sculpted the tale based on my experiences and interpretations, as had the author of the book I had read it in. That is the wonder of stories. They change with each telling, the nuances moulded anew by the storyteller for every new occasion.

The told story has a magic of its own, and it teaches children so many subtleties of life beyond what it contains. Interpretation, metaphor, to seek meaning in the chaos, all these things children learn by listening to stories, and from the lessons learnt they grow into adults to tell the stories again. So it is that stories live forever, and so it is that the core of humanity survives, not through our technologies, and our histories, and our philosophies, but through our stories.

While it has become easy to allow the various recorded and live entertainment media to take over the education of our children’s imaginations, I urge that you do so with a healthy dose of scepticism. Don’t steal the right of being told a story from your children. For what more are any of us than the tamed beasts that settled down around the evening fire and learnt to tell a tale?