My memories of reading as a child and of children’s books are a little strange.

The reason I mention those as two separate issues is precisely what I mean by “strange”. As a child, at the beginnings of the age at which “reading” started to make some sense, I discovered a large dusty tome stored away in a forgotten shelf when I was helping my Mother with some spring cleaning one afternoon.

My Mother was one of the least condescending parents you could ever wish for. Instead of snatching it away from me or discouraging me in anyway, she explained that this was one of the few books she had preserved from her college days. My Mother had studied zoology in college and this was a large college level textbook of biology with a focus on the animal kingdom. She then opened up the thick volume to somewhere in the middle and showed me why she had preserved this particular volume.

In the centre of the book were colour plates, but these were no ordinary colour plates. They were transparencies, but not ordinary transparencies. They were the closest thing to multimedia I have ever seen in a book because these transparencies were a virtual dissection. That might sound morbid, but I was never encouraged to be scared of anything and so as a child I saw the beauty of it. On the first sheet was an exquisite painting of a frog as seen from above, and as you flipped the plastic pages, you peeled back layers of the animal from skin, to blood vessels, to internal organs, to bone, and eventually back to a painting of the bottom view of the frog. It was beautiful, and I was forever hooked. While I did read comics and all the rest, I would often return to the large biology book with the beautiful frog in it, and I found beauty in every layer.

While I did plenty of more juvenile reading when I was very young, I never got into the typical children’s stories or bedtime fantasies at that age. Perhaps they always paled in comparison to the inner landscapes of a frog and the many other fascinating creatures in my biology book. Many years later, when I was a voracious reader in middle school, and I had already begun my journey into the mysteries of Agatha Christie

and the vastness of Asimov

, I came across a lone Enid Blyton book in the school library that caught my attention. I had never tried beyond a passing glance to get into any of her other works, and reading the Famous Five after Asimov seemed like a large leap backwards. Despite that, the stories of The Faraway Tree

caught my imagination and I poured over them like a child anew. So taken was I by this simple but well imagined world that I later picked up an edition of the three Faraway Tree

books in a single volume that I found at a dying bookshop on its last legs.

I still keep that one children’s book of my collection proudly on my bookshelf. It sits there in a position of equal importance with my book of bacteria and fungi, conifers and legumes, and one very beautiful frog.

My heartfelt gratitude to Emma over at Treehouse Jukebox for helping me remember, and for instigating this outpouring. 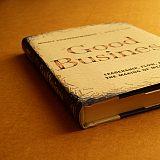