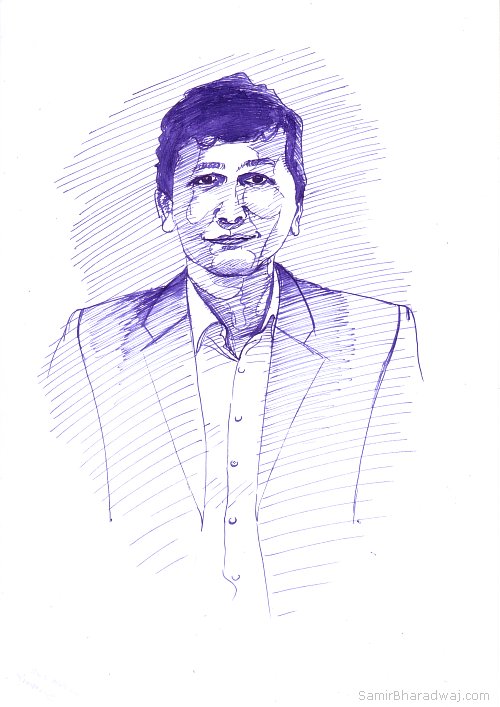 My last bout of drawing with a pen resulted in a chance encounter with an old fountain pen from my school days. That led to a whole new fluidity of sketching as I tried my hand at a more hatching-heavy technique of drawing. After January was done and the new year began to sink in, I once again felt that urge to draw, that urge to think while not thinking, and so I took up the fountain pen again.

I did a quick fountain pen sketch to loosen up, the one of the man seen above, and mentioned my upcoming sketch exercises on Twitter. While receiving very enthusiastic responses to the idea, I also got some suggestions and favourites as to what I should draw. The common theme of all the suggestions was the human figure, so I decided to concentrate on that. Having done this one sketch in a style similar to previous attempts, I also set out to make the subsequent drawings more elaborate and detailed. 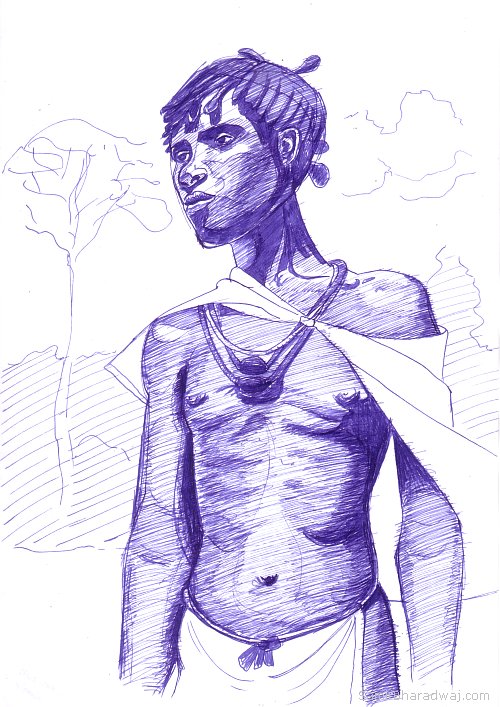 I started out with this strong image of an African tribesman. It was a good place to start because the combination of the dark skin colour and the sunlit image made it imperative for me to do some very dense hatching to properly express the sense of the visual. Also, it dropped me head first into the realm of human anatomy, because I find the male figure, especially the torso, to be very challenging to capture. The final results were encouraging. 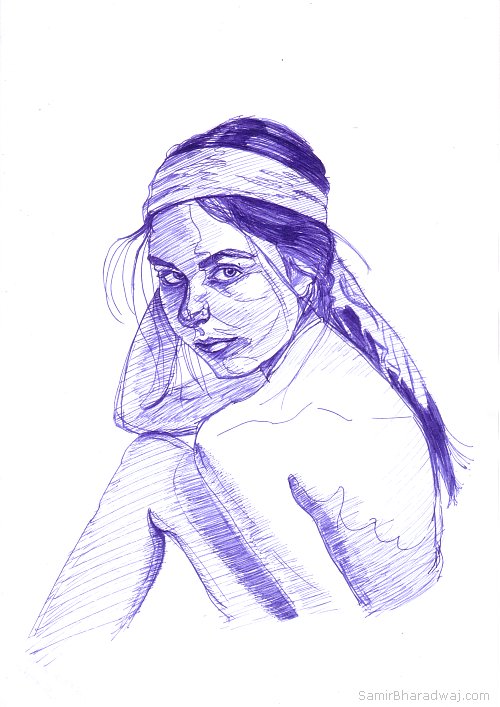 Next I took on something that comes more naturally to me, a striking face with a fairly simple female figure, requiring only minimal structure. Here I began to realise the perils of drawing with a pen when you’re not completely familiar with human anatomy. There were several places in the line drawing where I strayed dangerously away from anything resembling correct human proportions. Some of them I realised and corrected, and some of the fun was in then making it a finished piece by smoothing out these deviations while hatching. Although, due to the simplicity of the figure, this one didn’t require a lot of cover-up. 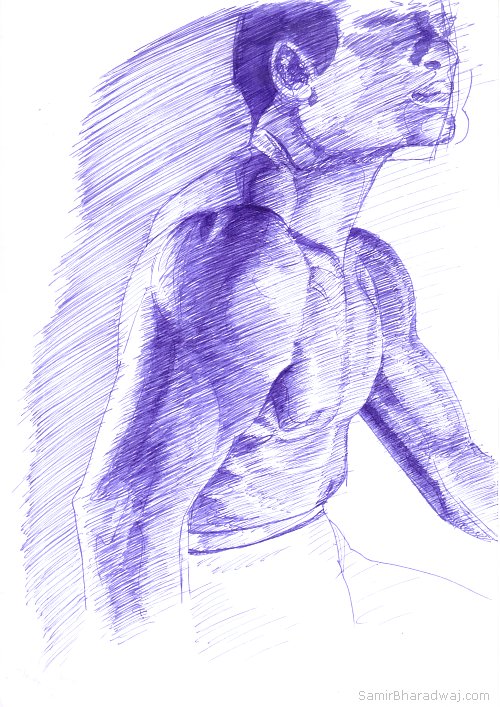 After being very pleased with that last drawing, I jumped straight back into attempting that biggest of my drawing fears, the male torso. I glossed over the head and face in this drawing, concentrating on the musculature of the the arms and abdomen. That’s what I wanted to capture most. I quickly realised that since I didn’t understand it enough to minimise it all into a few lines, I was going to have to do a lot more hatching.

I began to use the fountain pen almost like a graphite pencil, or even paint, to get the range of tone and density of lines that I wanted to express this figure with. While I was at some of this furious hatching, Vishal decided to shoot a few clips of video, which is above. Considering even I am a little unconscious of the exact mechanics of what I’m doing when I get into the drawing frenzy, it makes for fascinating viewing, if pen-strokes and shading excite you. 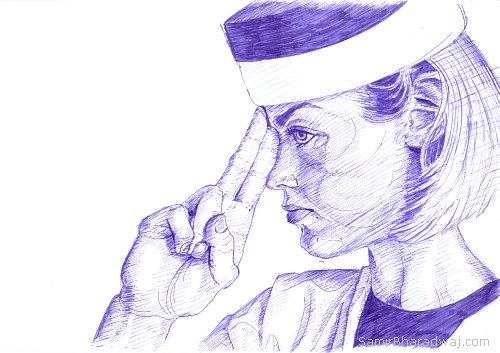 Back to faces, and hands, because the hands were as much a part of my decision to tackle this image. After the painterly results of the previous sketch I was much more decided on what I wanted to draw and so did the basic lines for all the sketches that follow consecutively over a couple of days. Then due to other distractions and a healthy dose of laziness, it was over a month before I came back to these sketches and finished them, including this face. 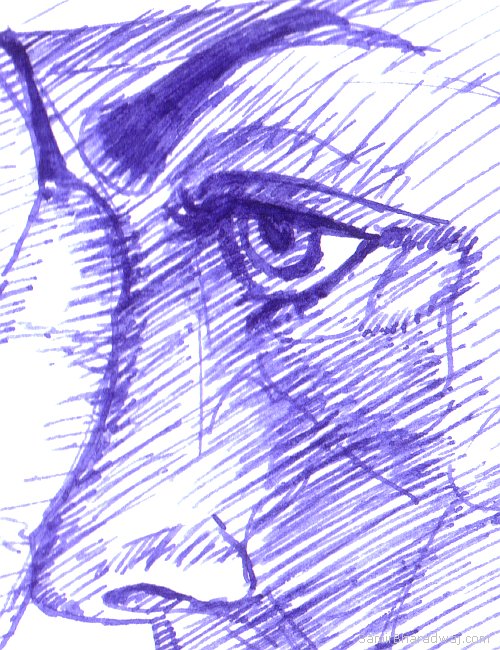 The woman in the navy hat I did first, and it went pretty smoothly because I enjoyed looking at this image above all other factors. Since all these were done on A4 size paper, that shot of the full image doesn’t quite give you a sense of what the hatching looks like up close. These images while smooth in gradation are very detailed in line, and sometimes almost chaotic, as you can see from the magnified swatch of the face above. 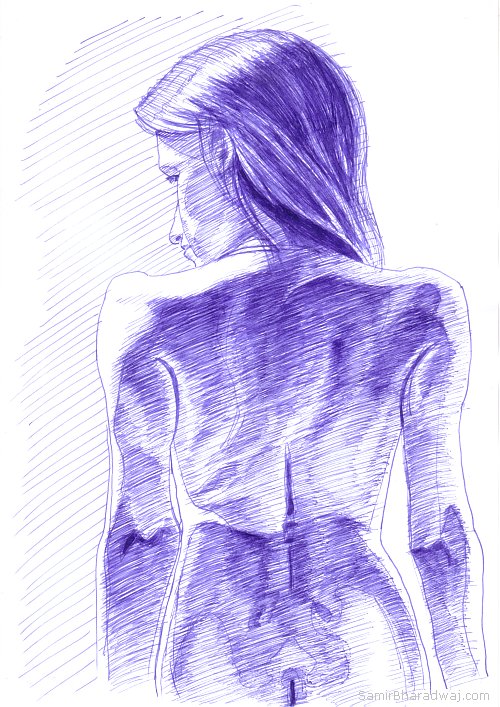 Next in line was a woman’s back. The back is always challenging because it has no obvious physical features to stylise into making a representative drawing. All its nuances are hidden below the surface with mere hints of shade and indentation on the skin to indicate their presence. It’s tempting to draw the back as a vast flat plane, which sometimes works, but at other times that would look nothing like a human back, and so you must dig into the details. In this image, I did dig. 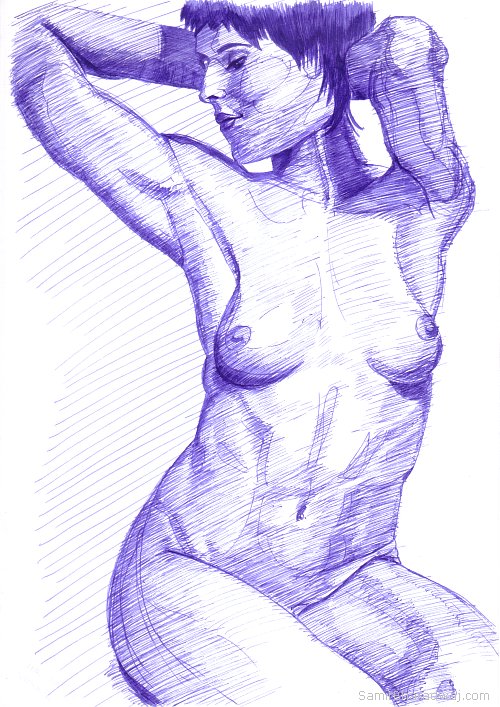 It was then time for a more classic nude. The fore-shortened left arm and the generally well-lit tone of the figure made capturing the nuances of the abdominal area a tricky prospect, but after much trial and error, the final image is pleasing enough, in spite of some proportional mishaps. 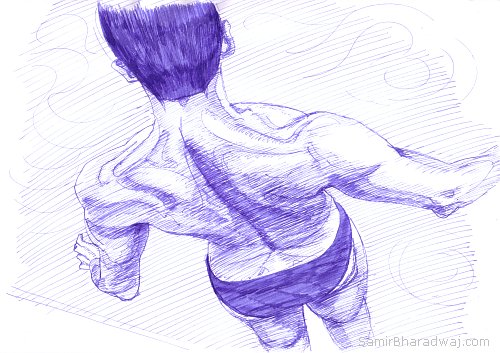 Having been brave about tackling the male torso, and also having braved the female back, I was feeling foolhardy enough to tackle the male torso from the back. And to make things even more difficult, let the entire figure be foreshortened! To draw such a dramatically angled figure, you really need to put all your efforts into seeing shapes and forms, and ignoring what you think a human body looks like. Which is exactly what I did, and the basic line drawing for this was probably done faster than all the others. The speed helped me to stop second-guessing what I was seeing and to simply react and record. Even though the shading was tricky because of the well-lit nature of the original image, I quite like the end result.

After my initial announcement on Twitter about the sketch marathon, one suggestion for subject that came from a dear friend, was to draw a woman turning into an eagle. Compared to other suggestions such as ‘draw girls’, this one was more elaborate, and required me to create something beyond sketching from a source so I left it for last. I started with a plain line drawing of a figure, as you can see above, and then augmented it with aquiline features, after having stared at many photographs of eagles. No, really. And the result was this: 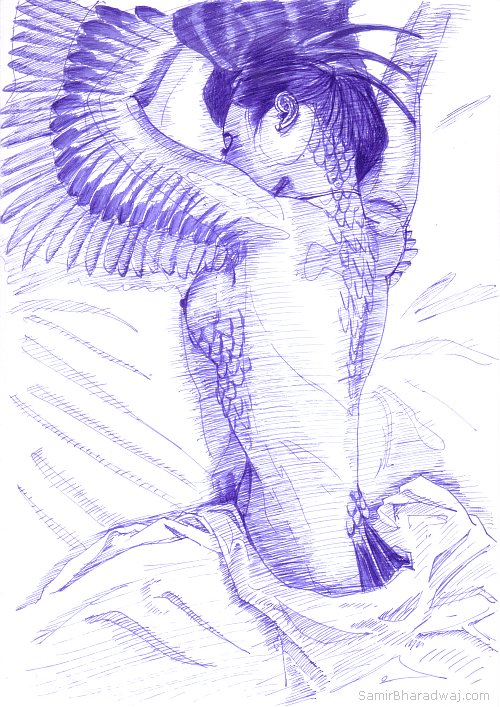 I am pleased with the final piece. Even though I didn’t bother with thumbnail sketches and similar preparation to try to get exactly the right look, the figure does have a sense of drama to it and the hybridisation isn’t a glaring one while also being clear enough.

After braving many drawing challenges and finishing after all the delays and false starts, I am happy with what I did here. This practice of drawing with a pen has always been about digging into drawing without worrying too much about getting it right, and also about improving technique and courage. If you look back at the sort of rapid scribbly pen sketches I started out with a couple of years ago, you can see why I am satisfied with the progress made, even if the gaps between tries have been too many and too long.

Of course, this comes at the cost of time and effort. The simple sketches at the link above took around 15-20 minutes to do. The drawings on this page took more like 3-4 hours each to complete. That difference is inevitable, but also with time that time scale will reduce as expertise takes over from sheer persistence.

There is still much to be learnt. I have made several proportional errors in these drawings, not because I didn’t notice them later, but because drawing with pen meant there was no way to make massive corrections. Part of the problem was in drawing on a relatively small A4 sheet and trying to fit the entire image in after having started on one part of a figure using a pen; Things get reduced and squeezed to fit. Such things wouldn’t happen if I had a deeper understanding of human anatomy, but that too will come in time. For now, this set of scribbles is done, and hopefully more shall follow without the customary long silences. 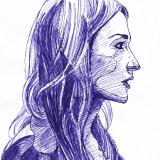 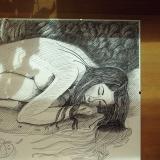 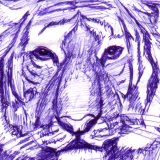