A good personal business card or visiting card is an invaluable thing to have. If your a designer, writer or independent weirdo of any sort, I’d say it’s absolutely essential. Whether you like it or not, telling most people you’re a freelance anything is tantamount to telling them you are jobless and destitute. The number of people who reply to “I freelance” with a sympathetic “That’s ok” is not funny.

Hand them a business card and maybe they won’t give you unsolicited career advice, and maybe actually remember you. In case you haven’t realised it yet, most people don’t remember you for ‘you’, they just remember what job you’re in. You’re usually that guy who works for XYZ, or that girl who’s into ABC. So, that guy who’s jobless is unlikely to stick. I don’t make these rules, I just read them as I see them.

When I started freelancing I was still studying. Most work came in through direct personal contacts, for whom business cards were unnecessary. As I started working with friends of friends, the need became more apparent. Thankfully, one of my final year classes was about the professional practice of design, and creating your own business card was one of the projects. That’s how I ended up with my very first personal business card. 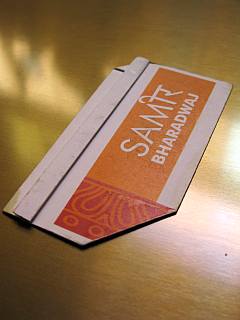 I had my personal logo ready for more than a year before I took the professional practices class. It was now a matter of coming up with a visual style and concept for the card. I was always a firm believer in functional design, so I decided to create a card not so much with an aesthetic in mind, but one that met all my practical needs.

I needed a card that worked to promote me as a freelancer, and also had to be easy for me to produce. My requirements were these:

With these points in mind, I figured I needed a design that was printed one one side of the sheet but was somehow a two sided business card. I decided keeping to a simple one-sided card would make it look like a cheap print. While it would be a cheap print, it couldn’t look that way. I realised I could pull this off by printing both faces on one side and then folding it into a two sided card. I could have used glue to hold the two sides together, but that would have looked tacky. Since I have always been an origami buff, I decided to use a paper fold for the fastening mechanism. Thus my origami business card was born.

This card served me well. I used it for 5 years, and it never failed to get a response from anyone I gave it to. They wanted to know what it was, why it was folded, what was inside. It did what it was supposed to do and caught their attention. But after five years it was beginning to show its age. For one I now had a website which didn’t appear on the card. I stuck it into newer versions but it was an uncomfortable add-on. Also there was the issue with people trying to open it and not finding anything inside. I needed a new business card design so I set out to work on one. 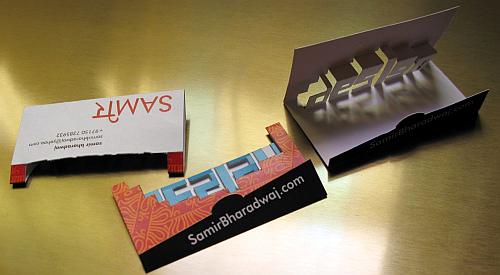 Another of my paper passions provided the solution to my new problem. If you want to print on only one side, but you want something to be on the other side as well, what better than a pop-up cut into the plain white side of the paper?

That was the trigger that set me off. This time my requirements were:

The solution you can see in the pictures. A design that kept the very textured aesthetic from the first card and my website, while also including the pop-up word “design” on the inside. It graphically described what I do better than any line of text could have. I also put in an extra flap to fold over the open edge as a seal, to keep it flat, and this flap prominently featured my website address. Not only was this a flat business card, but it became a mini table-top display with my web address on it when opened. 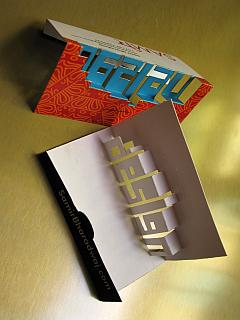 Coming up with this final design was not a one step process, and I do plan on writing a more detailed article on the design of just this card in the future, with pictures and explantions of my thought process. As cards go, it worked pretty well. Granted it was a bit delicate, but if people were impressed with the origami one, you can imagine the reaction to this. It worked wonders!

Unfortunetely, my pop-up card design was far from perfect. I only ever made a score or so of these and they quickly disappeared to people I met over those next few weeks. I didn’t make any more because it was too time consuming. Remember that the issue with laser printing these is that I cut and finish every one of my business cards by hand. It adds a nice personal touch to everything, a philosophy I like to maintain with my clients, but there are always practical limitations. While I could cut and fold two dozen origami cards in an hour, it took me an hour to just cut four of these pop-up business cards. I am all for the personal touch, but there are only so many hours in the day.

I’m still very much sold on the idea of a pop-up business card. I’ve seen people do very simple things with a few cuts, but my point has always been to make my personal business cards impressive. For that I need something more elaborate but also easy to produce quickly. Accepting that this was not a problem to be solved overnight, I shelved this particular design after my initial batch and planned on working on more practical alternatives in the future. 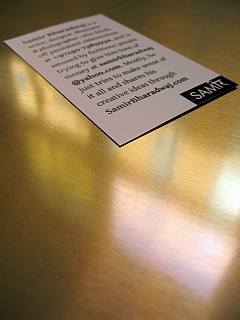 The great pop-up card saga happened last year. Into this year I didn’t have many contacts with new people. I was doing a lot of continuing projects with old clients and the need for a business card didn’t come up. All the time the ideas for business cards and especially the pop-up continued to haunt me, but I knew I needed a simple interim design which would be quick and easy. There was also the nagging feeling in the back of my mind that something like a simple personal calling card was in order. Then last month, I suddenly got into quoting for a few copywriting gigs. When a meeting with a new prospective client was set up, I found myself card-less. This was now urgent.

My simple personal business card needed to do the following:

Since it is fairly difficult to make a laser-printed rectangle of thick paper seem like anything more than what it is, I needed to be clever with what I put on it. I decided to get rid of all color because that could sometimes come out looking cheap from a laser printer. I highlighted the fact that I write by making the card one small paragraph of writing rather than the table of informtion people are accustomed to.

As a finishing touch I resorted to a small technical trick. I used “rich black”. For those not familiar with print production, let me explain. Print works by using four colour inks: cyan, magenta, yellow, and black (CMYK). If you want a specific colour, you print the four inks on top of each other in various proportions to get what you need. To print black text you only need to print the black(K) ink, but black ink is never purely black, and it’s never the deepest black you can have. So, designers use a trick called “rich black” to compensate. This is where you print a little bit of one or two of the other colours (CMY) and then print the full black, like you normally would, on top. This makes the black look much deeper and ‘blacker’. In this card, this trick helped immensely and gave the text a bit of a raised appearence when studied closely. A worthy trick.

I’ve been using my simple black & white personal card for only a few weeks now and I love it. It’s easy to deal with and does exactly what it is meant to do. It might not attract as much attention as my previous trick cards, but I’m ok with that for now. I plan on continuing work on the pop-up design in time, but even when I do get another impressive personal card, I think I will continue to use the simple card in parallel, when it is more appropriate.

That, ladies and gentlemen, is the saga of my personal business card designs to date. I hope you enjoyed this tale of design and intrigue, and I hope you will share your own busines card stories with me. I’m sure you have some good ones, and I can’t wait to hear them. 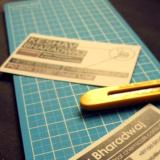