The shared wisdom used to be that if you didn’t have something nice to say, you didn’t say it. I believe that rule has now been rescinded by the United Nations. At least I assume it has, because what I see most often is the opposite. People who have nice things to say usually keep it to themselves, which is fine, but others rarely spare the effort to tell you how you’re wrong.

While this is a general phenomenon, the internet has had some small part to play in it. It appears people who want to be vocal about their disapproval of your ideas are encouraged by the anonymity allowed by the net, and the separation from the target of their disagreements it affords them.

The rants and unending virtual fist-fights on public forums all over the net are legendary, but I’ve also seen a few examples here on my own blog over the years (articles under Earth & The Universe and Creative Ideas seem especially prone). The disagreeing ones universally begin their “contribution” to the comments with one of three positions:

There are times when I just let these comments be. Other times I respond and question their assumptions, to which they react in one of three ways:

All three of those reactions generally result in me avoiding any further comment. What I find surprising about these vocal detractors is that they always disagree on a point slightly tangential to what I have written about, or they pick up on a minor fact on the fringes of my topic and argue against it. This says to me that most of these people rarely read what I have written. Instead, they jump at the first sign that my thinking is not completely submissive to their pet beliefs.

My Mother always told me never to discuss religion and politics. She was a wise woman and knew what she was talking about. I try to follow that piece of advice as far as possible, but what she didn’t know is that today, religion and politics are not the only sure ways to sow the seeds of disagreement. No sir! Now, “thinking” human beings can be be outraged about just about anything. They even demand that the rest of the World quietly and impotently accepts their disagreements. What my Mother didn’t know is that the World is now increasingly filled with spoilt children of all ages, and this is a state of being people actually aspire to.

Most people, and spoilt children, seem to live in a rigid, immutable universe where the blacks are the deep blackness of space, the white is pure and unsullied, and rights and wrongs are clearly and indisputably differentiated. I don’t live in that universe. Interpretation plays a dominant role in our experience of life, because almost everything we experience about it is an interpretation of our limited intellect using our very limited senses, through the distorting lens of our over-active emotions.

I have no problem with being disagreed with per se. Considering my interpretative view of things, I actually expect it, but where the average disagreer goes too far is in implicitly questioning my right to interpret. “Not only do I disagree with your interpretation, but I disagree with interpretation as a whole, because mine is obviously the absolute truth”, seems to be what most of them are actually thinking. Children, grow up. There is no absolute truth, and if you knew this truth, you would certainly not have bothered with coming on TV, writing in newspapers, and commenting on blogs about it.

I never claim to be right all the time (only most of the time), but I do claim that when I say something with any degree of thought, I am never wrong. If you are one of the many who cannot see the vast difference between those two positions, we’re just going to have to agree to disagree. 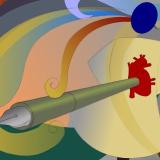 In Praise of Subjective Writing