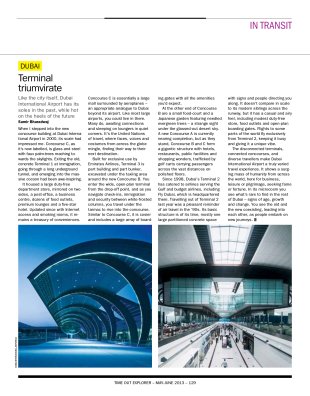 When I stepped into the new concourse building at Dubai International Airport in 2000, its scale had impressed me. Concourse C, as it’s now labelled, is glass and steel with faux palm-trees reaching towards the skylights. Exiting the old, concrete Terminal 1 at immigration, going through a long underground tunnel, and emerging into the massive cocoon had been awe-inspiring.

It housed a large duty-free department store, mirrored on two sides, a post-office, a business centre, dozens of food outlets, premium lounges and a five-star hotel. Updated since with Internet access and smoking rooms, it remains a treasury of conveniences. Concourse C is essentially a large mall surrounded by aeroplanes – an appropriate analogue to Dubai beyond its airport. Like most large airports, you could live in there. Many do, awaiting connections and sleeping on loungers in quiet corners. It’s the United Nations of travel, where faces, voices and costumes from across the globe mingle, finding their way to their next destination.

Built for exclusive use by Emirates Airlines, Terminal 3 is part building and part bunker, excavated under the taxiing area around the new Concourse B. You enter the wide, open-plan terminal from the drop-off point, and as you navigate check-ins, immigration and security between white-frosted columns, you travel under the tarmac to rise into the concourse. Similar to Concourse C, it is cosier and includes a large array of boarding gates with all the amenities you’d expect.

At the other end of Concourse B are a small food-court and a Japanese garden featuring needled evergreen trees – a strange sight under the glassed-out desert sky. A new Concourse A is currently nearing completion, but as they stand, Concourse B and C form a gigantic structure with hotels, restaurants, public facilities and shopping wonders, trafficked by golf carts carrying passengers across the vast distances on polished floors.

Since 1998, Dubai’s Terminal 2 has catered to airlines serving the Gulf and budget airlines, including
Fly Dubai, which is headquartered there. Travelling out of Terminal 2 last year was a pleasant reminder
of air travel in the 90s. Its basic structure is of its time, mostly one large partitioned concrete space
with signs and people directing you along. It doesn’t compare in scale to its modern siblings across the
runway, but it has a casual and airy feel, including modest duty-free store, food outlets and open-plan
boarding gates. flights to some parts of the world fly exclusively from Terminal 2, keeping it busy and giving it a unique vibe.

The disconnected terminals, connected concourses, and diverse travellers make Dubai International Airport a truly varied travel experience. It shows a surging mass of humanity from across the world, here for business,
leisure or pilgrimage, seeking fame or fortune. In its microcosm you see what’s rare to find in the rest of Dubai – signs of age, growth and change. You see the old and the new coexisting, leading into each other, as people embark on new journeys.