In the trusty old paper dictionary that’s always lurking beside my bed, it says work ethic is a belief in the moral value of work. More recently, the term has come to mean something closer to work habits, as in a good work ethic, but this original definition has more depth to it and it gives us a lot to think about.

When I was in school, I usually studied on the last day before an exam. It was stressful and stupid but also prudent, because what were the exams but a gigantic memory game? You consumed as many facts as you could and hoped you’d retained enough of them to spit them out on paper on demand. There was a fixed deadline (the day of the exam), there were certain tasks to be completed (reading all your text books and notes without falling asleep), you did the best you could on the big day and then forgot about it for the next few months. The entire exercise encouraged you to run through the storm while having as few of your possessions blown away as possible, and then walk on, never looking back. It’s a great work ethic, for an employee.

While I was half way through college, I was often sitting up into the wee hours of the morning and forgetting to watch the sun rise, usually hunched over some big piece of drawing paper or mounting board, creating the latest master-piece project. All this so that I could get my full 10 points for presentation and move on to the next manic task. On one such night, I decided I didn’t want to be an employee. This was fine in theory but what I didn’t realise was that they’d been secretly training me to be an employee all my life.

After college I started freelancing full time, and time became a more fluid and chaotic resource. The structure of courses and semesters was gone, to be replaced by the ever-changing vagaries of client work, often with multiple projects in progress, with multiple people to please in each one, and with ever shifting time-lines and requirements. It was around this time that I became a very conscientious lister of things to do. I have these old, large wide sheets of perforated computer printer paper that I used for the purpose. Every morning, I’d write down the date, and a list of things to finish during the day, to be ticked off along the way. Of course, it’s rarely that simple on large projects. You work on things on the day but you rarely finish, so things you worked on are ticked and they still get added to the next day, because further atomisation of tasks isn’t always possible. 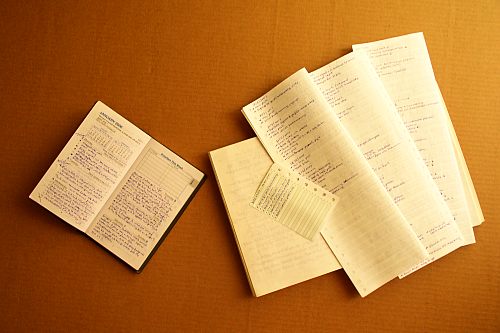 The only time I would stop making my lists was when I was on holiday in India. On one of those trips a few years ago, we visited the forests of Ranthambore (a trip I have always wanted to, but never written about here). It was just after the monsoons and the sanctuary was only just opening for visitors. The 5 days I spent there was probably the most intense experience I’ve had in a long time, in a good way. There was so much to see and take in that the rest of the world disappeared for those few days, and all there was was the little town of Savai Modhopur, the lush forest, the magnificent wild life, and the splendour of the thousand year old Ranthambore Fort. When I returned from that trip, making to-do lists just didn’t seem like a useful thing to do any more. Lists do help you get organised when you’re juggling various tasks, but their dark side is that the mechanical ticking-off of tasks everyday gives you the feeling of getting a lot done while not achieving anything. Unwittingly, I had become an employee of my unquestioned lists, and that had to stop.

The end of to-do lists in my life was not an isolated decision. It had to do with a more general shift in focus, away from purely chasing freelance work to attempting to originate ideas and projects for myself to work on. After working on client projects for many years, I had come to realise that while many were technically challenging, none of them would end up being of any practical use to real people in the long term. Advertising, brochures, smartly copy-written websites, all helping forward the cause of a disembodied corporation but rarely meeting any practical needs of individuals. It came back down to doing a lot, and getting paid, without accomplishing anything.

This idea of a busy state without accomplishment is the same wall I hit in school and has become almost the ideal of the employee’s work ethic. As I was thinking of this piece, in a strange case of synchronicity, my friend Zélia put up a Twitter comment on her frustrations with work and the fact that multi-tasking was a lie. I had to agree, and for me it made a mental connection with my days of making to-do lists. I did a lot of multi-tasking when I was making to-do lists. Strangely, I didn’t seem to achieve any extra results that way, other than leaving myself a bit wound up and frazzled at the end of days.

When doing any sort of creative work, multi-tasking is really just an illusion. You can pretend that it works but if you can’t tell the difference in your output while your juggling tasks as compared to when you’re focussed on one, you just need to accept that your tasks aren’t very challenging or that you don’t care one bit about them. In work that leads to something solid and tangible, work that is not based on simply doing the best you can before an artificial deadline and then moving on regardless, the only way that ultimately gets you results is to do your work on that one thing, do it thoroughly, and don’t consider anything else until it’s done. In the real world where you make real things that have to get real results, simply attending an exam and getting a satisfactory score does not mean you’ve completed anything.

To work with that sort of concentration though, you need to believe in what you’re doing, what you’re creating, and what you’re working towards. How else can you have a work ethic, a belief in the moral value of your work, if your work has no real value?

So as much as I feel despair on some days when the impulse to work leaves me with no warning, I realise that I cannot in fact buy a work ethic. You can buy a work habit, by sending your children to an expensive school where they will be brought up like good slaves, designed to hammer in that same nail every day without ever wondering what it was for. You can also buy a work habit by being an employer and proceeding to buy the talents of a good number of those human machines from good schools who will fill out all those forms which no one will ever read because that’s the way it’s always been. As part of that work habit, you can now be assured that your employees will spend most of their time in your workplace logged into Facebook or their equivalent choice of online distraction, and build a virtual farm, run a Mafia, respond to quizzes about their favourite Disney princess, and also fill out those Excel spreadsheets that you supposedly pay them to fill out, for no practical purpose. This after all, is multi-tasking at its best.

By a happy accident, some lucky employers will also get a rogue bunch of rebels in their mix, whose focussed work will carry the rest of the organisation on their very valuable shoulders for a long time to come. But, you can’t buy a work ethic, because believing in your work that strongly doesn’t come cheap; You pay in ways that even the richest cannot afford. So if you’re one of those few people who would like to have a work ethic rather than a work habit, if you would like your work to have real results for real people, if you believe in the real, practical value of what you do and are prepared to be an outcast amongst the well-schooled machines, put your head down, throw away all those books on multi-tasking and time management, and focus on the task at hand. Then stick to it until it is complete to a level that scares every employee you know. Don’t forget to hang on tight; It’s going to be a bumpy ride.