Today I loaded a 50 Kg drum of glue into a Porsche 911. Yes, you read right, I mean a real live Porsche 911 sports car, not an old beat up Toyota with a bumper sticker that says “My other car is a Porsche”. And no, I’m not giving up on design and writing and going into the manual labour market any time soon, but this is an interesting story anyway.

My Dad works in the field of industrial chemicals, and being the overly conscientious worker that he is, it is not unheard of for us to sometimes take a detour during his off hours to make some small but urgent delivery to one of his clients. It’s usually a bag or a few bottles of some of the more harmless stuff he deals in. This evening we set out on the mission to deliver a drum of food grade glue to a guy whose factory would come to a stand still without it. We arranged to meet him somewhere convenient and set off. I’m used to seeing some guy in a pickup truck or a normal saloon car take the delivery at these meetings, but this time was different. The person we were meeting was new in town and unfamiliar with the place, so a few quick exchanges on the phone later we were told to look for the Porsche in the parking lot. That piece of information didn’t really sink in until we pulled over next to a metallic silver Porsche 911 and the person at the wheel waved out to attract our attention.

Now, most of you are thinking, “Wow! A Porsche!”, but that was not the thing that had my attention. One of the sad side effects of living in Dubai is that you see too many super cars too often and seeing a Porsche is not really an occasion for surprise any more, at least when you drive around as much as we do. No, my concern was more in the area of, “How in blazes do you fit a drum into that car?”. We stopped, said hello to the young guy at the wheel and then things got more interesting: the drum we were carrying was not the smallish plastic 25 Kg version I was accustomed to seeing during these deliveries, instead it was a double sized 50 Kg model!

It was troublesome enough getting that drum out of our car. After a lot of struggling we managed, and then our friend with the Porsche said we could try the boot of his car. Since the 911 is a mid-engine car, the “boot” is in the front. You open the bonnet and there is a cosy little receptacle that can be used for luggage. I was actually surprised by how big it was considering the very compact shape of the Porsche. Our next challenge was lifting the drum into the 911. We did manage to do that after a lot of huffing, puffing and adjusting by all. Throughout that process, my main concern was to not scratch the paint on the 911 as we slipped the drum into position. How much does it cost to touch up the paint work of a 911 anyway? I didn’t really want to find out. Eventually the drum fit snugly into the boot of the car, as if it was designed for that very purpose, our grateful 911 driver thanked us and drove away. 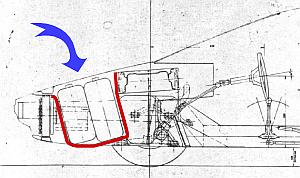 I found the entire experience bizarre, but also very encouraging from a designer’s point of view. The boot of the Porsche 911 was much more spacious and capable that I would have ever imagined. Later I checked up on some blue prints and came across the early prototype drawings (left) for the original 911 design from 1971. As you can see the boot that I have described in the more modern offspring was very much there in the original design, shown holding two suitcases, which it is more than capable of doing. To design a sports car of the calibre of the Porsche 911 and still keep in mind the need for an adequate storage space is a design philosophy worth applauding in my book, and that has forever increased the status of Porsche design in my mind.

The other thing we noticed as we were dumping 50 kilos into the front of the car is that the nose never moved an inch. There was no sagging of the suspension, no weighing down of the body, and no perceptible visual change in the car. I’ve seen enough cars to know that even pickups and trucks designed for carting heavy loads react very noticeably to the addition or offloading of a major weight. But the Porsche 911’s obviously magical suspension just made it seem like nothing had changed. Yet another piece of brilliant design and engineering.

I think this philosophy of designing something with the highest technological and stylistic goals while still keeping it within the realms of practical performance and sheer usefulness is an achievement that serves as a good reminder to all of us that such a complex goal is possible to reach. I have seen hundreds and thousands of examples of design both in the online and offline worlds where technological and stylistic goals are often at odds with usability and practicality, and never the twain shall meet. Avant garde magazine designs are often unreadable and legible book designs are often stoic and unexciting. A similar dichotomy exists in web design where the trend seems to swing between excess and minimalism. We have been through the excesses of the late 90’s when every site had a million flashing gizmos and animated intros and now we live in a world of plain white backgrounds and strict modernist grid layouts. Why can’t we have both? Why must we sacrifice one for the other?

I think as in many other fields the question of minimalist vs rich web interfaces and blog templates becomes a bit of a religious issue, with screaming soothsayers on both sides of the argument spending most of their energies deriding the opposing camp. But the fact remains that the very purpose of design is to reconcile these two opposing energies of the creative process: form and function. My little experience today with the immensely versatile Porsche 911 reminded me of this fact, and this is one reminder we all need to get at regular intervals to make sure our online endeavours are best served in the design department.

Today I loaded a 50 Kg drum of glue into a Porsche 911, and I came away learning something about web site design and the online user experience. Is your web site or blog template a Porsche 911, or do you just have a lame excuse on a bumper sticker?