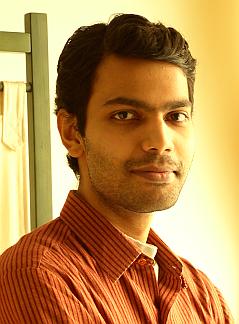 Samir Bharadwaj is a writer, designer, illustrator, photographer and an all-round do-it-all generalist who suffers from aspirations of polymathy and delusions of grandeur. But in spite of that, he finds all this talking about himself in the third person to be extremely disturbing … so I’ll just switch to normal speak now, thanks. I keep myself busy freelancing in a variety of creative fields, and absorbing as much as I can from around me, in the hope that all that absorbing will add to my storehouse of things I can think about. I like to think of course, because thinking is so much easier than not thinking, and I’m lazy that way.

… able to leap tall buildings in a single bound!

Well, ok, to be fair I’ve never tried it. But that doesn’t mean I can’t do it! It just means the proper opportunity hasn’t presented itself yet …

No, truly moving about page is complete without revelations about the emotional scars and deep dark secrets that haunt the author being broadcasted to the world, so here goes.

No one understands me *snif*. And then they go ahead and misspell my name a lot too. In school they thought I was studious and thoughtful because I didn’t make a racket like everyone else. Even the fact that I was not topping the class never seemed to break this image. I finally thought I was getting out of the academic rigmarole, my record unblemished by any medals of great scholarship when they decided to present me with a parting gift in the form of a Certificate of Good Character. What?! Where did that come from? … I’m just trying to do my time and get out in one piece boss – don’t want any trouble. What does that mean anyway? “It’s ok that you didn’t excel at school … at least you’re a nice guy.” Shhh!

They mis-spelt my name on the certificate, of course.

I’m still trying to figure out whether I should take that as a compliment. That and the few chunks of metal I picked up in the august hallways “higher education”, which also had my name misspelt on them. Mind you, I’m not really over sensitive about the name, but if you have to give me chunky shiny stuff fit for a hip-hop video, at least copy the 15 letters correctly from your computer records. It’s Samir, not Sameer. And let’s not even get into what has been made of my second name.

Go ahead, ask me anything

No really … I obviously choose what questions to answer, but almost anything goes. Ask what you may, no matter how obscure, obtuse or ludicrous, and I shall attempt to answer.

If I think my answer is of general interest, I often make a blog post of it, and if it’s something that would only make sense to you, I will do my best to reply personally.

Living in Dubai. Thinking of Mumbai.

I’ve been using that logo (top of the page) personally and professionally for many years now. It’s a visual juxtaposition of “Samir” in the Roman alphabet and the way it is written in the Devanagari script (Hindi). The last bit after ‘M’ reads in both the type-forms.

If you’re one of the curious ones, you might have gotten here by clicking on that little statue that flits up and down the middle of this site when you scroll the page. It’s an image of the statue of the Goddess Flora that graces the top of the great old fountain at the centre of Mumbai’s southern business district. So much of an influence does this lady have over the area that it is still popularly referred to simply as ‘Fountain’.

We all have that one place in the world which just feels right to us. Something deep in our soul connects to it and it feels like home even if it isn’t in the literal sense of the word. For me Flora Fountain and the area that surrounds it feels like home, and so I thought it would be a good idea to keep a symbol of it on this site. Flora is watching!