I saw the original TRON a few times when I was in school. The fact that it was on mildly-scratchy rented video tape, made it no less revelatory about the possibilities of augmenting film with animation, and also about the vast potential of the then burgeoning technology of computers. While I haven’t watched that film in over a decade, I was very enthusiastic to see what they would do with a sequel, a quarter of a century later. TRON: Legacy exceeded my expectations on every level. I was expecting a glittery blockbuster, but what I was given was a excellent film of nuanced beauty. 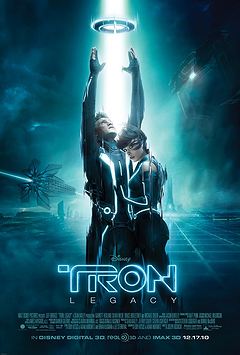 Back in the late 80s when I first saw TRON, I was just discovering computers myself. I had signed up for an evening class in computer programming at school. On our first day, we sat in front of our sparkling new Amstrad PCs and learnt how to write a simple computer program in GW-BASIC. I didn’t stick with that course for too long, but the seed of interest in computers was sown. TRON in 1982 was not just a masterpiece of human effort (many of its effects were hand painted and composited using multiple layers of physical film), it was also an open declaration of the scope and implications envisioned by a new generation of kids who had grown up with the possibility of computers becoming more than research tools. Possibilities that kids like me, some years later, were still discovering. Like all the best science fiction, it extrapolated from current trends and introduced new visions. TRON: Legacy continues in that spirit.

The new film is set in current times when Sam (Garrett Hedlund), the son of Kevin Flynn, Jeff Bridges‘s character from the original film, has grown up as a genius rebel. His father disappeared when he was a young boy, never to be heard from again. Flynn’s company is now a global software powerhouse, which the young Sam is ever trying to restore to its original philosophies through his acts of sabotage. Alan Bradley (Bruce Boxleitner), the programmer of Tron in the original film, comes to Sam with a possible lead about his father, which leads Sam back into the digital world of The Grid, fighting to get out. The plot is simple and clear, and almost mirrors that of the original film. Considering how relatively trivial CG special effects are today, compared to back in 1982, TRON: Legacy chooses not to let its pretty-face be its only trick (and it does have a stunning face), but rather takes strength from the thoughtful writing and the profound world it creates.

TRON: Legacy works in no small part due to the towering presence of Jeff Bridges, both as the ageing creator of The Grid, and as his digital id, Clu, a CG-assisted recreation of a younger Bridges. He plays both roles with a casual grace that adds weight, believability and humanity to the occasionally sterile environs of this film. Garrett Hedlund is sufficiently eager and conflicted as the young hero, but again has been chosen not for his dramatic histrionics but for his understatement, which works well. The film has a small cast of supporting characters, all well assayed. This includes the ever-present Michael Sheen, who plays a short but important role in another chameleon-like transformation into the vaudeville-inspired Castor. The true surprise of this ensemble, however, is Olivia Wilde playing Quorra, mysterious sidekick to Jeff Bridges’s Kevin Flynn character. She brings a nuance and genuine feeling of innocence to the character which goes well beyond the impression I had of her talents from previous television outings.

A lot of thought was put into balance in this film. The various elements have been dialled up and dialled down so that they add up to a harmonious whole rather than a cacophony. The visuals are stunning, without doubt. They take the pixel-inspired video game world of the original TRON and take it to new heights of sheer beauty. This film is beautiful to look at, and I’d be hard-pressed to agree with you if you didn’t see the light-cycle sequence and some others as more art than set-piece. The soundtrack is by Daft Punk, who present a score nowhere near their brashest and noisiest, as would be expected. Noise has been sacrificed for a more lush aural atmosphere.

Director Joseph Kosinski is a trained architect and an accomplished ad film maker, and it shows in the mentioned touches of balance and nuance throughout this film. Beyond the strong script, he brings emotion and belief into this story, which takes it beyond being a standard high-tech adventure. For a technology-heavy film, TRON: Legacy has a very classic and epic feel to it. The basic ideas and plots are as ancient as storytelling itself, and it chooses to highlight concerns about life and existence over bits and bytes, while referencing not just its predecessor but subtleties and mood from many disparate sources. I enjoyed the fact that there was a lot of Blade Runner in here, from the way the World looks to some of the concerns communicated through the story, and I detected many shades of Shakespeare’s The Tempest in its characters.

There’s quite a big difference between the world of computers in 1982 and 2010, but in some ways all the promise foreseen in 1982 did not come to be. Computing devices are now ubiquitous and part of daily existence for a large section of the population, but what they are used for hasn’t been the revolution the geeks of the time had imagined. So, I was glad to see that TRON: Legacy, while being a direct sequel in plot, was almost a retelling and reaffirmation in spirit. TRON: Legacy is about what could have been, as compared to what we have become, and a reminder of future hope.

I loved this film because, after a long time, I saw true science fiction in the cinema. Inception was another such recent film, but this one goes further into the scientific imaginings involved. Like all the best science fiction, it uses technologies and science to not only frame questions about the consequences of those, but also questions social structures, and ultimately what it means to be human. Such basic yet lofty goals, are rarely seen in writing today, leave alone cinema. This film took me back to a childhood of watching Blade Runner and reading Isaac Asimov. That is never a bad thing, because like those, TRON: Legacy always chooses subtlety over bluster, poetry over dazzle. It speaks to people like me, who grew up at a time when computers meant something special and complex and profound. And it gives us the hope, through its fantasy, that perhaps one day they can be all those things again.