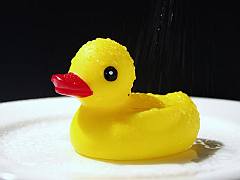 When we throw things away, where exactly is “away”?
That was the question put to me by one of my intrepid readers, Pasha, in the context of one of my environmental articles. So enthusiastic was I to give my answer, that the thoughts poured and poured without end. What resulted was an unnatural beast that would never be accepted by the other comments in the tribe, and so it was promoted to being the post that scrolls before you now.

Assuming this question is speaking in terms of physical eventualities rather than abstract philosophies, let us plot the course of human detritus when it leaves our homes. Let us suppose we are talking of a specific item, a plastic toy of some sort, maybe a little yellow “rubber” duck. So, we’re talking of a soft plastic toy which has outgrown its welcome.

If I were a conscientious person, I might add it to my plastics pile of recyclable wastes. Or I could give it away and it would have a new life as a second-hand toy to some grateful kid who doesn’t have any better … but that route still leads to the eventuality of it being disposed, so let’s stick to the first track. The duck is transported to a sorting plant. If the material in it is deemed salvageable, it is sent to the actual recycling part of the process, and if not it goes back into the garbage fork of this great journey (more on that later).

To be recycled, the plastics are chemically modified, broken down, melted or otherwise changed into a more malleable form of basic material. In this process energy is expended, and some part of our now quite unrecognisable duck wafts out of an industrial chimney somewhere, its complex molecules polluting the evening breeze and creating a stunning many-hued sunset. There they will remain, either rising to new heights to be broken down by the harshness of Sol’s ultraviolet radiation in the upper atmosphere, or by the bombardment of cosmic rays that still manage to pierce through the Earth’s magnetic shield. In the end those broken down molecules and even the heavier original molecules will find themselves washed into soil or sea by precipitation.

But that was merely the story of our dead duck’s ephemeral ghost. The main mass of plastics in the bird will join into the large molten vats to be moulded into plastic raw materials for other processes, or become useless debris which is of no industrial use. These wastes will once again find themselves dumped into soil, water, or garbage, for lack of laws preventing the same, or the lack of any truly permanent solution to “safely” storing dangerous industrial wastes. The remaining plastics will go on to other uses, and our friendly duck will eventually be a proud constituent in a new low-quality plastic bucket, or a beach ball, or a fake wood substitute in a recycled plastic park bench. There our favourite bird will feel right at home in the water, or be bashed around a lot, or sit around and watch the trees, until it has once again outgrown its usefulness. Then this cycle will start all over again.

If I were a less conscientious person, or the duck was not judged worthy by the recycling Gods, or most of it just didn’t quite make it to the boiling vats, then to the garbage it will go. Garbage is a very strange beast. In most modern cities now, it is first put to a trial by fire where a large portion of it is crushed and burned in those monster garbage trucks that prowl your streets at night and devour the contents of entire industrial-size garbage skips in one gulp. During that process, some of our bird would once again bellow out of the garbage truck as smoke to pollute breezes, decorate sunsets, and generally consort with the wafting ghosts of other dead plastic ducks.

What remains in the truck would finally reach the hell-on-earth that is an urban garbage dump. Here millions of archaeological piles of human ignorance stand triumphant over millions of older layers that have been pressed further down into the Earth with time. Eventually better sense, or laziness will prevail and the garbage dump will be covered over and the dumping will move on to another site, leaving the old one open to exciting development work on parking lots, or luxury resorts, which ever happens to be more profitable in the prevailing economic cycle. The melted mass that was our late ducky will still be there, somewhere deep in the earth, and its flesh will melt into the soil and be washed by the rains into the waters. Ashes to ashes. Dust to dust. Water to water.

Maybe in a million years some of the super compressed debris that was once a city dump will be converted by the tectonic forces into some exotic form of super-efficient fossil fuel that we have not yet dreamed of in our philosophy, but more likely it will slowly break up in time, clogging the natural systems for thousands of years to come. What the waters carry away will reach other places and other soils and at some point what’s left of our yellow rubber ducky might actually make it down to some farm of the future. There the crops, not knowing what to make of the weird substance clogging their systems, will dump it into leaves, seeds, and fruit, which will eventually be eaten by you.

Finally all those juvenile tries to gnaw at ducky’s beak will have come to bear fruit. Ducky is with you again, and also on a farm, along with toxicity, cancer, and a few other friends we might not have been introduced to yet. … Or I’m completely wrong and by the time ducky’s molecules are reincarnated in a pumpkin, the human race would have been driven to extinction and the environment would be nursing a nasty hangover, but recovering fast.

Either way, I love a happy ending.

Shock Me Twice, Shame On Me