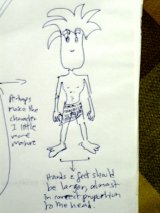 Another project is born, and hopefully this one will be completed :). I had this idea for a character whom I want to use in an animation eventually, but also in some hopefully “great” shots. This sketch was done a few moments after the idea initially struck. It’s a reasonably simplistic character, because I’m ignorant of Blender animation techniques at the moment and I need something simple but pleasing to start with. Lets hope it works.

I have begun modelling the character and this is what I have so far. The mesh is meant to remain very basic. The screen shot here is with one level of Catmull-Clark subdivision applied to the object. I will probably up the subdivision for render-time but I’m not sure if I really want this to be a completely smooth surfaced character.

Those ideas will be clarified as this progresses. I hope to post updates here as I model, armature, and pose the character. I don’t expect to use many textures, or at least nothing complex, so that’s one less thing to tackle.

Another project is born. Maybe I need to start paying myself to complete personal projects … that certainly seems to work when I take on freelance work. Damn capitalist education!
😉

I don’t have a head for this sort of thing

Your own two feet