The Wachowski Brothers have an immense reputation to live up to following the seminal Matrix trilogy. After that epic SF philosophical musing, they have now chosen to tackle the more straight-forward world of retro anime in the new Speed Racer movie. What came across in their previous work was the consummate nature of their vision and their execution, and I am pleased to say Speed Racer doesn’t disappoint in either department.

Classic anime was a very important part of my education. By education, I mean all the influences and inspirations that mould us as human beings, and by important part I mean that it kept me sane. In a world populated by children who enjoyed being talked down to by little men in large bird suits, and thought the WWF (now WWE) was both entertaining and “real”, I had nowhere to turn to for mind fodder on the small screen once I had consumed my share of Star Trek TOS reruns. Anime such as Speed Racer came to the rescue, because at last there was something that was fantastic, entertaining, and also more grounded in reality than the hordes of pantless animals with bad diction that passed off as children’s entertainment.

It is important to understand, that what seems like retro kitsch over acting in hind sight, was at the time a refreshing breadth of maturity compared to everything else. For this early exposure to Japanese animation I can be thankful in no small part to toy merchandising. The 80s glut of toy merchandising cartoons made it possible to watch cartoons as a kid without completely switching off your brain, and it introduced you to the fact that these Japanese people know how to do some really fancy stuff with a pencil and some animation cells. Many of these titles were clearly influenced by the, then already classic, Speed Racer cartoon. I can think of so many car, vehicle, and motoring based titles that made an impact: M.A.S.K., Pole Position, and the resurgent Transformers. If I remember right, the design of the vehicles in Pole Position were very Mach 5 influenced, and even films such as the campy but brilliant Death Race 2000 took a lot of tips from the Speed Racer manual.

There is a whole history and culture behind Speed Racer, not just in the original cartoons and the characters, but in everything it inspired and all the people it helped assure that cartoons for kids can be about reasonably real stuff. The world of motor racing and even exaggerated motoring intrigue is all pretty real compared to most of the other material of popular animation. One has to wonder whether anyone would have thought an animated series about cars and drivers could be a winning proposition before Speed Racer came along? The reason I mention all this history is because it is quite clear that the Wachowski brothers know and understand all this, and they kept it in mind when making their movie version.

The Speed Racer movie is a visual shock. Using the increasingly popular technique of location-free green-screen shooting, popularised by the likes of Sky Captain and the World of Tomorrow and 300, Speed Racer drowns you into a surreal world that looks like a logical projection of what the frantic anime world of the Speed Racer cartoon would be like in an unspecified future. When I first saw the trailer of this movie I had serious doubts, because the colours were loud and psychedelic, the mattes were practically obscene, and the action was hallucinatory and epileptic all at the same time. Everything I just said is still true once you see the entire movie, but it is given context in a full viewing, which makes it a relevant and valid choice in the art direction and execution of the Speed Racer universe — not to mention fun. This movie is about racing and the directors have taken every effort in making that the focus of the film’s aesthetic, while at the same time giving nods to the original source material and classic films of a similar ilk, such as Death Race 2000 and Danger Diabolik, in the process.

No movie works without the right cast, and here is another department where the new Speed Racer is full of good choices. Emile Hirsch wouldn’t exactly have jumped to mind for anything prior to this, but he does a very commendable job in creating a believable and human character in Speed. He brings some real nuance to the role, even though he is mostly whizzing past in a trail of neon lights as plenty of CG sparks light up the night — not an easy achievement. Speed’s girlfriend Trixie is well played by Christina Ricci in complete bubble gum colours, which is very reminiscent of the original Trixie in the cartoon. An excellent job is done by Matthew Fox as the mysterious Racer X. It’s nice to see this actor shining on the big screen because he has a great screen presence. This gives me hope that we shall see much more of Mr. Fox once his Lost commitments are complete. Young Paulie Litt recreates the character of Spritle with style, Scott Porter makes a very strong appearance as Rex Racer, Australian actor Kick Gurry plays an entertaining Sparky the mechanic, and I have to mention that there was a chimpanzee involved too. While all those good performances count, the cast is really anchored by the veterans of the game. Susan Sarandon and John Goodman let their experience show by playing Speed‘s parents completely straight and from the heart, and the story is the better for it.

Straight and from the heart is really what this movie excels at. In spite of being almost completely one long special effect, and in spite of the seemingly frivolous source material, Speed Racer never flinches at being totally heart-felt and un-cynical. In an entertainment world where every old story is given new twists and revisions to make it more hard and gritty for the fickle teenage audience, Speed Racer chooses to go the other way. This movie is, dare I say it, good and wholesome. Some would say it is so to a fault, but I think it proves that you don’t always have to make things complicated to make them engaging.

The Wachowski brothers have given Speed Racer the qualities of a futuristic fantasy action flick, with the heart of a well meaning children’s tale, and they manage to pull off both of these earnestly. If you are a fan of the original cartoon, or have a single child-like bone in your body, you will not only enjoy Speed Racer but love it. It is a strange and wonderful beast that skirts the edge of modern motion-sickness-inducing cinema, with good old fashioned storytelling, where the good guys are good, the bad guys are bad, and there is always an exciting last lap to the finish line. That is a hard direction to take today, and the team behind this wonderful piece of cinema should be commended for their courage in taking it. 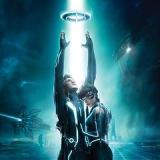