The story so far …
Debi (Mobile) Jones had a problem with her Adsense payment due to a changed address. Matt Cutts from Google stepped in and eventually the problem was solved. When she went into the bank to cash her cheque, however, she was told that there were not enough funds in the account. Needless to say when the account in question belongs to Google, this piece of news from the bank teller can lead to anything from utter outrage to rolling laughter on the part of the recipient. I am happy to say Debi saw the humour of the situation and her report on her banking experience makes for a very entertaining read. Her new problem hasn’t been solved yet at the time of this writing and she posted a follow up to say as much. I found out about all this through Problogger, and now the story will obviously be Dugg to death. People love being incensed.

Personally I think it is an unfortunate story, but it’s more a story of neglect rather than of malice, as some would like to paint it. Google isn’t really out to get you or anything that sinister. They’re just too big and monolithic to notice sometimes. Not that that is an excuse in anyway from our end-user point of view, but it is the sad truth of most large organisations.

I’m surprised by the fact that the main Google inbound number still leads to a simple recorded message system (as mentioned by Debi). I would have thought they would have moved on to a falsely personalised anonymous call-centre a few thousand miles away by now. The fact that they haven’t done that actually impresses me, because I’m not quite sure which is better, the non-communicative recorded message lady, or the below average intelligence and resourcefullness of a call centre employee.

On the original blog, there were actually concerns by readers about commenting on this topic for fear of it negatively affecting their Adsense accounts. That, I think is a much worse thing to be happening than the actual bounced cheque. If I was Google I would be much more worried by the fact that my publishers seem to be living in so much mortal fear of retribution, than one wrong cheque.

Google has changed the internet and has pretty much single-handedly started the revolution of the monetisation of personal sites and content. They are a company that does a lot of positive things, and I admire them for it. Projects like the Summer of Code are absolutely brilliant ideas which produce positive results for a large community of people and are truly praiseworthy. Like all large organisations, however, I think Google does need to re-boot and re-think their basics on a regular basis. Sure, a lot of people are always going to hate them for no particular reason, that comes with the territory. But to continue being the dominant and moving force that they have come to become, they need to make sure their position is one of respect and not of fear. Unlike what some people think, those are not the same thing. 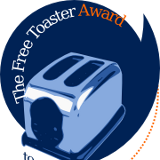 MyBlogLog and the Free Toaster