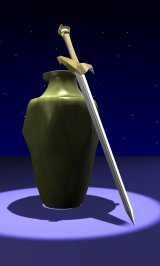 This is the result of further explorations of the Blender 2.0 Manual. This scene involves the sword which was modelled using the extrude (E key) function as described in the Mesh Modeling chapter, and also the amphora which was created with a combination of the spin and spin duplication buttons as described in the same chapter.

This was meant to be a modelling exercise, and I was quite happy with the results. The remove doubles command is especially useful to create complex extruded shapes. I thought I might as well create a basic scene with these objects, which lead to a string of disastrous renders yesterday. It made me realize that I know absolutely nothing about lighting and texturing. I started today with the same scene but re-thought the lighting, after reading some of the lighting tutorials linked from ‘Blender – an Extended Introduction’. It is definitely an improvement over some of my previous renders, but I still have a long way to go in lighting and texturing.

Right now it is best to stick to the Blender Manual, and get to know the intricacies of the software. Once that is done I can study the more general theories about lighting and materials.

I have no idea what is causing that un-natural ring of light at the base of the amphora, but I am sure I will find out as I learn more about Blender.
:blush: