The air in our apartment was still, when we walked in after our month long trip to India. The luggage was dropped on the floor, the footwear was discarded in neat bachelor stacks, and I walked up to the window to pull apart the white curtains. There on the narrow window sill, a mostly leafless basil plant still held on to life in the dying sun of the evening.

I was quite surprised it had survived over four weeks. No one had been watering it during that time, and yet it had weathered the dry spell. I was sure that with a little care, it would spring back into as much of of bloom as you can expect of a small herb growing in a small pot, indoors in a desert.

Thinking back, I realised that we had done some things to prepare the basil plant for our long absence, and we had cared for it quite well even before the trip was imminent, all of which are sure to have contributed to this survival story. 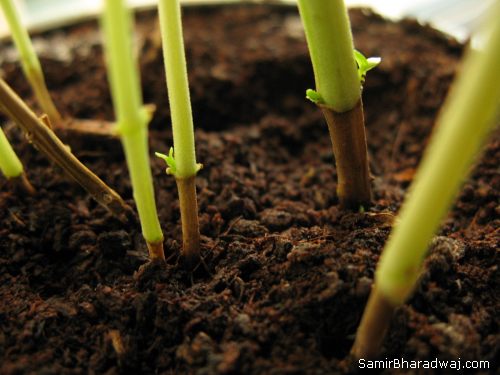 The basil plant was originally bought at a supermarket’s fresh herbs section. It came in a tiny, token pot filled with soft peat and fertilizer, with the plant bursting out into a plastic wrapping.

We’d learnt from experience that the tiny pot would not sustain the plant for long, so at some point Vishal removed the plant from its peat mixture, mixed the peat with some regular soil we had from prior indoor gardening experiments, and re-potted it in a larger pot. All this occurred on spread out newspapers on our living room floor while watching some entertaining television, of course. Plants really appreciate good television.

That was a good move, because after the few days of acclimatisation the plant became much healthier and started to look like an actual living thing, rather than the sterile perfection we brought in from the supermarket. The roots now had more space and more balanced soil to work with. A strong foundation to grown on.

2] Plugging all the leaks 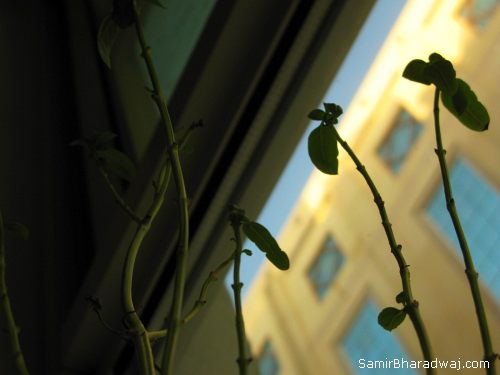 A week before we left on holiday, we decided it was wise to use up all the basil leaves the plant had to offer. The plant had been bought primarily for food rather than as decoration and it would have been a shame for it to go to waste, if it died during our trip. So in the days leading up to the trip, every home-made batch of pasta, sandwiches and salad received a healthy garnish of basil. By the time it was time to leave, the plant was bare, save for the tiny shoots sprouting at its tips.

Plants use some water to grow and survive, but a large percentage of that water is lost to the air through evaporation. Most of that evaporation occurs through the leaves. The leaves are the most vulnerable part of the plant. This is the reason plants in cold climates shed their leaves for winter, and also why plants in deserts often get rid of leaves completely.

By clearing all the leaves from the plant, we reduced the avenues for water loss, so what water was there was used better and lasted longer.

3] Creating a reservoir to fall back on 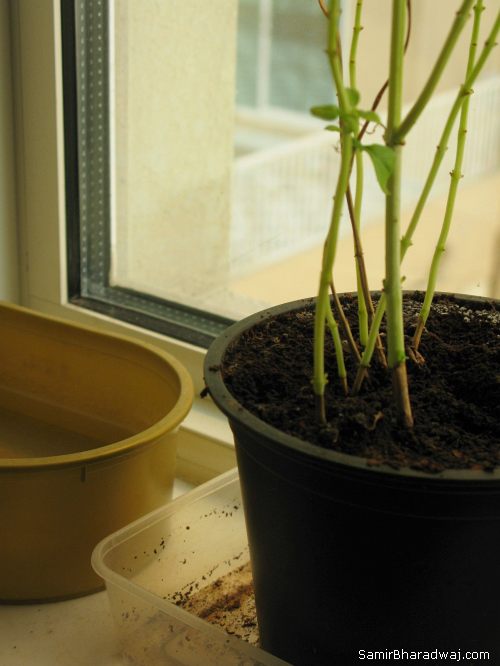 We didn’t over-water the pot the week before we left. In fact, I don’t think it was watered at all for the last few days. By the last day the soil surface was dry and flaky, which likely resulted in even lesser loss by evaporation.

Ten minutes before we left for the airport, however, I used a jug of water to fill the 2-inch deep plastic box in which the pot sits. The drying soil in the pot would pull in as much as it needed from below, but the surface of the soil would still remain dry enough to not choke the roots of the plant. Also, the soil would always be more efficient at absorbing water than the air would, so little would be wasted. 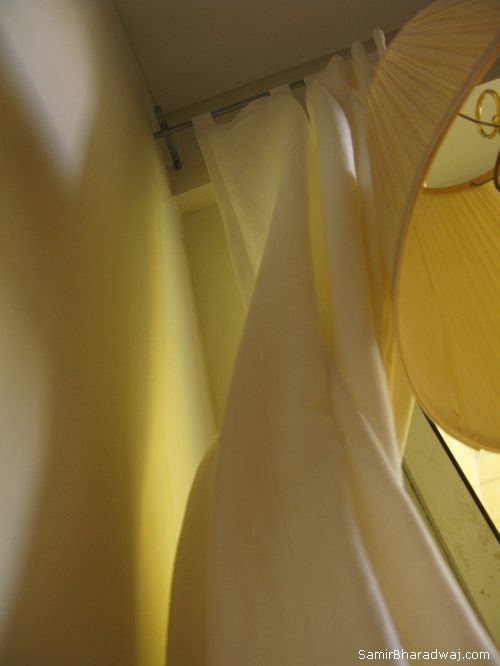 The rest of the water in the jug was used to fill an old one-litre ice-cream tub that also sits on our window sill. It’s filled with water to humidify the air, which can be very useful when you live your life in closed air-conditioned spaces. Dehydration due to the dry air is a very real problem.

On this occasion the ice-cream tub of water was even more useful, because I also drew the full length curtains shut in front of the little window ledge. This created a tiny space between the window and the curtain which would remain well humidified by the water trough. The curtain is hardly an impermeable barrier but even loose divisions are often enough to create a little protected piece of atmosphere. It would have taken at least 10 days by my estimate for that water to fully evaporate, during which time the plant would have enjoyed a well humidified atmosphere in its little room behind the curtain. The effect probably lingered for even longer. 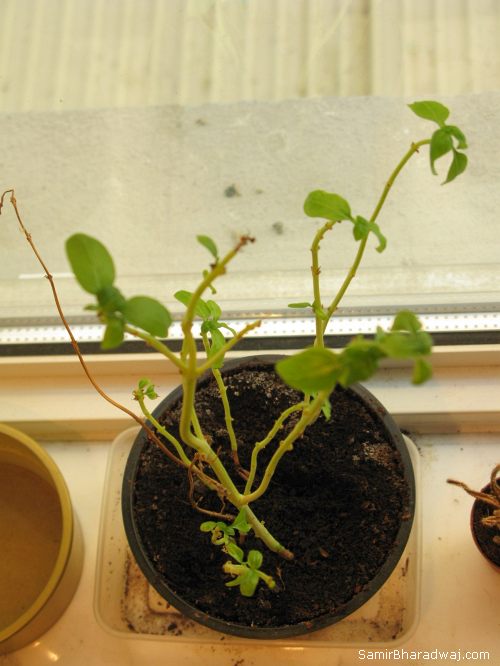 You can’t repeat the same actions and expect different results. Which is why this, our second basil plant from the supermarket, was replanted in a larger pot over a television session in the living room. Our first basil plant, survived an onslaught of very hungry aphids from a chrysanthemum plant we got from IKEA a few months ago. The chrysanthemum slowly died away from the aphids, which were probably there when we bought it, but the basil survived. It seems aphids don’t like the taste of basil sap in their diet. Eventually though, that basil plant did wither and die, probably from the lack of space and resources in that tiny supermarket pot of peat.

We learned our lessons, and didn’t waste the left overs from our failures. The chrysanthemum came in a larger pot with some real soil in it, so the chrysanthemum soil was mixed with the peat and our second basil plant found a new and bigger home to grow in. That reuse of old resources and the more balanced soil to grow in probably played a big part in our little fighter surviving the long drought while we were away on vacation. 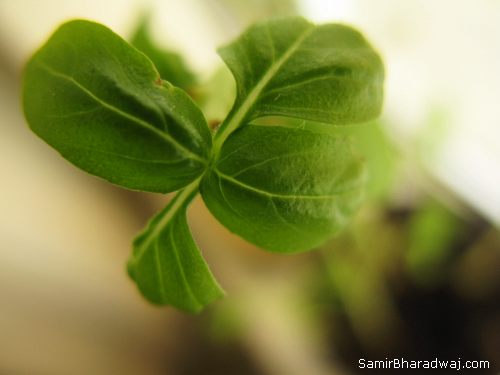 Three weeks later, the basil plant is still going strong. The tiny leaflets that were a bit shrivelled at the tips have now begun to grow and spread out into the sun. The stalks have taken on a better colour, and there are signs of rejuvenation all around. It will be some time before the plant bears fruit, or in this case usable garnish, again, but the future is hopeful. None of which would have been possible without a little thought and nature’s talent for frugality when she needs it. 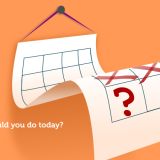